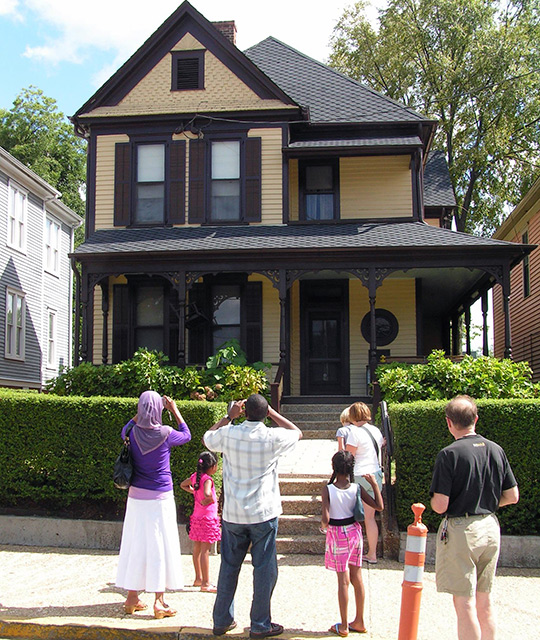 “Sweet Auburn” was the affectionate name given to a one-mile-long, two-block-wide corridor near the heart of Downtown. During its heyday it was a Mecca for Black Atlantans.

Auburn was called “Wheat Street” until 1823, when white residents changed its name. But eventually Anglo-Americans moved out, and African-Americans moved in. The phrase “Sweet Auburn” was coined by John Wesley Dobbs, maternal grandfather of Atlanta’s first African-American mayor, Maynard Jackson. According to legend, he said that unlike other black streets, Auburn Avenue was not on the wrong side of the tracks. The Avenue was off of Peachtree Street, the White commercial district of Atlanta, an ideal location. In fact, another one of its nicknames was “Black Peachtree.”

Dobbs, the “Grand Master” of the Prince Hall Masons, was considered the “Godfather of Black business” in Atlanta. He formed the Atlanta Negro Voters league and helped increase the number of Black voters from less than 2,000 in 1940 to more than 22,000 in the early 1950’s. Equally important, he was an advisor to Martin Luther King, Jr., who was born and preached on the avenue alongside his father, Martin Luther King, Sr.

In the 1950s and the 1960s, the Southern Christian Leadership Conference (SCLC), led by Dr. Martin Luther King, Jr., and Ebenezer Baptist, Wheat Street Baptist, Big Bethel AME and Butler CME churches kept Auburn Avenue as a nexus of social activity and the Civil Rights Movement. Dr King was co-pastor at Ebenezer Baptist Church. The powerful influence of Atlanta’s churches and Civil rights leadership was proven just after the assassination of Dr. King in Memphis. Ministers, the SCLC, and King Family were all unified and vocal in their statements to maintain calm around the city. Unlike most other cities in America with large Black populations, Atlanta did not suffer destructive and pointless riots. That calmness amidst the pain would pay huge dividends later, as Atlanta’s white leadership realized the economic advantages of trusting African Americans enough to share political power.

Benefiting from more trust between the white power structure and black political and business leaders, enabled Maynard Jackson to not only become become the first Black Mayor of Atlanta in 1974, but to accomplish so much more once he arrived.

Though Atlanta suffered its share white middle class flight to the suburbs, Mayor Jackson did not face additional hollowed out buildings and joblessness caused by riots. I-85/75 Freeway construction bisected Sweet Auburn and the national fair housing act passed, it triggered many of the black middle class surrounding Sweet Auburn to contemplate moving to other areas with larger spaces. So ironically, movers and shakers of Sweet Auburn who helped end segregation, unintentionally helped end Sweet Auburn prosperity. As black middle class families moved into once whites-only neighborhoods. Sweet Auburn became a shell of itself by 1980. Nearby urban renewal efforts only warehoused poor people around Auburn Avenue, thereby providing more incentive for the last black middle class to leave. 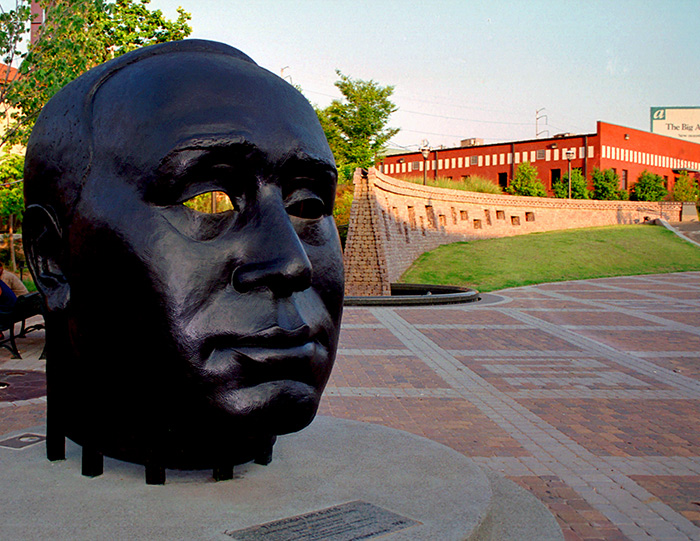 John Wesley Dobbs, Through His Eyes Monument on Auburn Avenue

Things began changing for the better in the 1990s, when Sweet Auburn was designated a National Historic District and amplified in the media. Atlanta Life Insurance Company rebuilt its headquarters on Auburn Avenue while Citizens Trust Bank maintained its co-anchor presence in Sweet Auburn. Though small businesses contribute to its daily life-blood, Sweet Auburn has become a stronger cultural anchor than ever. Atlanta Daily World still prints newspapers to the faithful. 100 Black Men of America established headquarters here. Martin Luther King, Jr. Visitor Center was built across from the Center for Non-violent Social Change and the Tomb of Dr. Martin Luther King. Even Ebenezer Baptist Church built a new edifice directly across the street from its old church, named a National Historic Landmark.

The big churches now draw even more congregants on Sundays. APEX Museum offers a glimpse of the history of Auburn Avenue and African American life. Auburn Avenue Research Library, one of a few nationwide, offers a wealth of information on Black history in America and is well patronized. Last but not least, the Martin Luther King. Jr. birth home, freedom center, grave site, visitor center and Old Ebenezer Baptist Church attract more than one million tourists each year. Momentum for even more visitors is increasing, see http://www.sweetauburn.com.