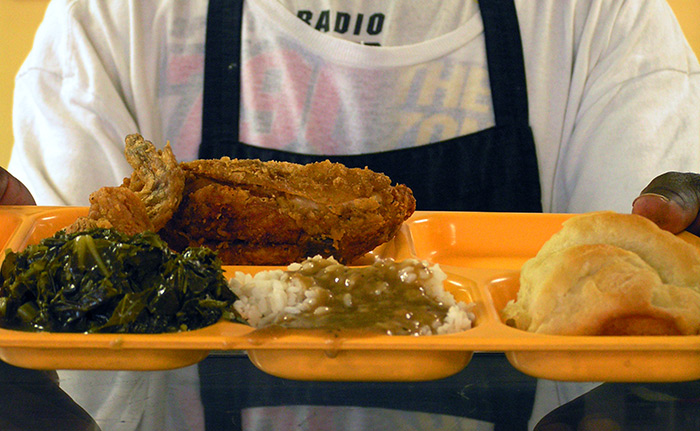 Atlanta Soul Food is a tradition from slavery on nearby plantations. Its well-deserved reputation for Soul Food was amplified by renown Soul Food restaurants. Some have closed over the years. A few have survived and have been joined by upscale Soul Food bistros.

In its heyday, the original Paschal’s Restaurant near the Atlanta University Center in 1959, was host to black celebrities and civil rights activists like Dr. Martin Luther King, Jr. and Andrew Young. In fact, Dr. King had many of his civil rights planning meetings there, and the Paschal Brothers would serve complimentary meals to activists as well as help post bail to get many of them out of jail. Today, the original restaurant has closed down and a new, more upscale Paschal’s has opened downtown, within walking distance of the Georgia Dome. But even with the changes, the restaurant is still known for its famous fried chicken.

Other historic soul food restaurants that have stood the test of time include Auburn Avenue Rib Shack only a block from the Martin Luther King Visitors Center, and The Beautiful in Southwest Atlanta, which sells delicacies such as oxtails. Fairly new to the city are restaurants like Annie Laura’s Kitchen in Riverdale. The latter restaurant is named for Evander Holyfield’s former cook and has some of the best fried catfish, collard greens, macaroni & cheese and peach cobbler this writer’s ever had.

Downtown Atlanta’s most prominent supplier of fresh ingredients for restaurants as well as consumers is the Sweet Auburn Curb Market. The 80+ year-old market is still a mainstay for Atlanta’s African American citizens, as well as tourists from all over the world. Vendors sell standard soul food fare like collard and turnip greens, yams, ocra, catfish, chicken, pork, and chitlins. During the holidays, chitlins are the biggest seller at the market. They’re even shipped to international clients. It’s believed that the Sweet Auburn Curb Market sells more chitlins than any other place in the world.

When first opened in 1918, it was an open-air market. Then in 1921 the city of Atlanta purchased a lot for a permanent market building that officially opened in 1924 as the Atlanta Municipal Market. Ruby Jones, who has been market manager for the past seven years, says the market was a lot different back then. “Back in the early days they had livestock here and they would kill and dress chickens and pigs for you. And before integration, African-Americans bought their food from the curb while whites could come inside”, says Jones.

When the market was renovated in the late 1990’s, it was renamed Sweet Auburn Curb Market to tie it into the Auburn Avenue Historic District – home to the Dr. Martin Luther King, Jr. birthplace and visitor’s center. The renovations and the 1992 visit from President Clinton gave the market national publicity and brought in more customers. Jones says, “Clinton ordered six cases of pigs ears for a dinner he was hosting for Russian diplomats.” Pig ears are a delicacy in Russia.

The market also sells international food items from Africa and the Caribbean, as well as hand-made African clothing, flowers, and hair- and skin-care products. Customers have even registered to vote here. Marga McBride sells items such as bamboo plants and fresh flowers through her business, Tropicals Plus Gardens and Gifts. “From what I see the market is geared toward produce and meats, but we want to add other things like the flowers, wine and cheese, and gourmet coffee — however because most of the patrons who come here are African-American, I believe there should be more black businesses” says McBride.

Grace Owvor-Smith, who sells hand-made clothing from Kenya at her shop, Just as African Image says, “My decision to open here is because it’s like a cultural meeting place for Black people.” In fact the market hosts fashion shows, speakers, and even voter registration. The Sweet Auburn Curb Market continues to be a mainstay for providing Atlanta’s food for the soul.