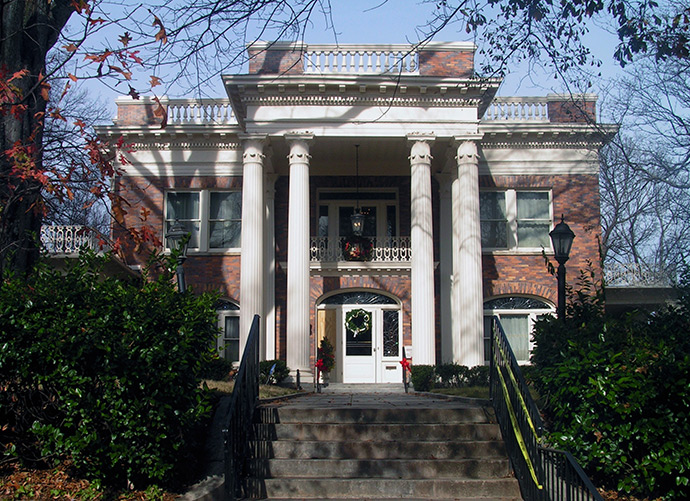 Herndon House, home of the first black millionaire in Atlanta

On land once belonging to Creek and Cherokee Indians, Atlanta has become the unofficial capital of the New South. In 1812 the first European Americans settled in Fort Peachtree, bringing enslaved persons of African descent with them. In its earliest American settlement, the area had few slaves compared to the major slave-trading centers of Augusta, Savannah and Charleston. The slave population multiplied between 1840-1860, just before the Civil War. It happened because Atlanta, then called “Terminus”, became the supply center and railroad terminus for the South with four major rail lines and due to the cotton industry boom.

As America has too frequently proven, anytime you marry Old South commercial activities with major distribution centers, slave-holders are attracted like bees to honeycomb. But slave-holders good times went up in flames during the Civil War. The war introduced food and clothing shortages as the Confederacy hopelessly tried to match troop supply lines with Union troop supply lines. And that was not the worst of it for white southerners.

Partly to punish the Confederacy, Union General Sherman ordered troops to set fire to Atlanta in 1864. By the end of the Civil War, African Americans enjoyed empowerment as full citizens for the first time, even as Union forces stripped privileges from White Southerners. The movie Gone With The Wind inaccurately depiction black southerners as “Happy-to-serve” drones before, during and after the Civil War. But it realistically captures white southerners sense of loss as their slave plantation estates and city burned. The Old South really was, gone with the wind.

By 1870, African Americans comprised nearly half of Atlanta’s residents. During the Reconstruction Era (1865-1877), African Americans elected their own city councilmen and other politicians. The threat of black political power to white male southerners hegemony festered until Union troops pulled out in 1877. Sensing the moment, white male southerners in the higher-ranking Georgia Legislature changed the voting rules in city district elections to an at-large process. No African-American could win an at-large election. Consequently, voting chicanery, not democratic process, stripped black southerners of political power.

Despite or perhaps because of unjust political losses and emerging segregation, a solid black economic base developed with a staunch loyalty towards black institutions. Black workers enriched churches that led to the development of Morehouse, Atlanta, Clark, Spelman, and Morris Brown colleges. Atlanta Life Insurance and Citizens Trust Bank developed on Auburn Avenue and black middle class neighborhoods like Summer Hill emerged in south Atlanta.

In his 1895 Atlanta Exposition Speech, Booker T. Washington was enthusiastically received when he preached that black economic empowerment was the practical road for African Americans to take. To paraphrase him, “We need to build our communities, rather than fight for civil rights.”

Booker T. Washington’s noble vision was smashed by the harsh reality of the 1906 Atlanta Race Riot, when it became apparent that black economic development could not proceed at a natural pace without civil rights protection. Incited by newspapers reporting false charges of black men raping white women, white mobs, assisted by policemen, burned down Brownsville district. In five days, the riot killed 25 African Americans and destroyed 1,000 homes. In addition to crippling black business, the riots split race relations. On one side, it sparked interracial dialogue between moderate voices. On the other side, it rekindled Klu Klux Klan activity. This tension between white moderates and the Klan dominated racial relations in Atlanta.

In such a divisive and spirited environment, the historic black colleges of Atlanta blossomed. Included among their teaching staff, was the great intellectual, W. E. B. DuBois. He and other intellectuals made Atlanta University Complex, the Harvard of the South.

While race relations slightly improved after World War I, strict segregation remained a fact of life in the South. In the midst of those times, John Wesley Dobbs made a name for himself as the pioneering businessman of Auburn Avenue District, known affectionately as “Sweet Auburn.” A black family could shop for everything they needed in and around Sweet Auburn.

Black soldiers and airmen acquired taste for human equality and dignity while fighting in Europe during World War II. When they returned, it sparked social activism that changed Atlanta and America. Hardened Jim Crow laws and customs would gradually erode like water constantly pounding a rock.