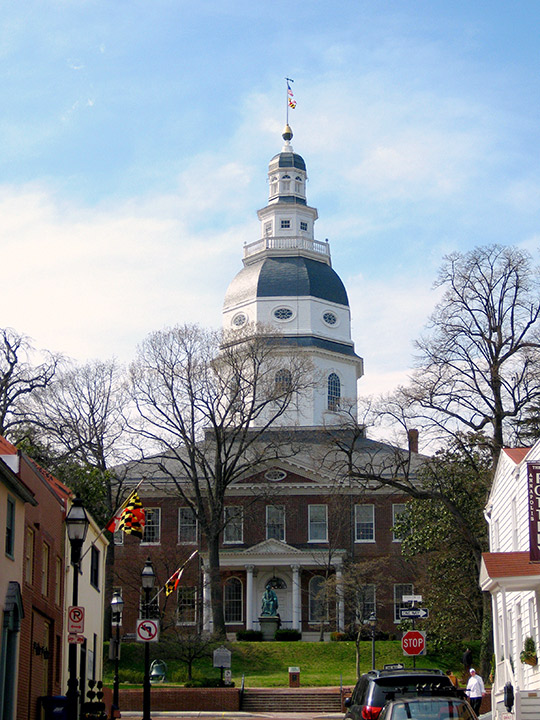 Native Americans often crossed through the Annapolis area during hunting expeditions to the other side of Chesapeake Bay. So when the British claimed the territory in 1649, it was wild and virgin. Though founded in 1649, Annapolis received its name in 1695 to honor the youngest daughter of British King James II’, Princess Anne, at the same time it became the Maryland Colony capital. In 1770 Charles Wallace, a merchant and builder, subdivided this tract of land in the Cornhill, Fleet and East Streets area of Annapolis for craftsmen, tradesmen, shopkeepers, livery stables and taverns. From 1783-1784, during the Revolutionary War, Annapolis became the nation’s capital.

African descendents often passed through Annapolis via portside slave auctions. Others were more fortunate and arrived as or became free skilled tradesmen. In a fast growing port city such as this one in the 18th and early 19th century, European Americans capitalized on tradecraft of all people regardless of race. Many of Anne Arundel County’s 5,000 Black residents worked as free civilians for the U.S. Naval Academy, or worked the city’s docks, or owned businesses and a few built residential properties and streets for African-American workers. The remaining African Americans were freed on 1 November 1864, by Maryland’s fourth Constitution. Between 1885 and 1930 the Clay street neighborhood changed from one of scattered Negro tenements, coal yards, and flats to a community of over 200 houses and some 30 stores. Many African Americans owned stores and businesses in the neighborhood.

Frederick Douglass’ sons, Charles and Lewis were members of the Massachusetts 54th Colored Troops who served in the Civil War. Major Charles Douglass was refused a meal at an upscale waterside cafe in Annapolis, Maryland in the 1890s. That insult motivated him to purchase 44 acres of tree-lined beachfront property slightly southwest of Annapolis along the Chesapeake Bay, where he founded the Highland Beach resort in 1893. Thus Highland Beach was consciously planned as America’s oldest Black resort community. Charles, built a cottage in the resort for his father Frederick Douglass, though Frederick passed away shortly before its completion. The Frederick Douglass’ summerhouse, Twin Oaks, remains a landmark in this bucolic resort, which is now a community of private homeowners.

Highland Beach has hosted many other famous residents and visitors over the years. Retired Buffalo Soldier officers, Black Congressmen, clergy, educators, artists, and writers visited. Paul Lawrence Dunbar, Booker T. Washington, Mary Church Terrell and E. Franklin Frazier each bought or built vacation homes here. As its reputation and population grew, Highland Beach incorporated as a city in 1922 to establish political and infrastructure benefits for its citizens. You can drive around Highland Beach, but can only stay if invited by a guest. The guesthouse, when the community was a resort, has been transformed into a private home. Every home in Highland Beach and the beach will remind you of America at its best.

Some of the legacy of Highland Beach is captured in the recently expanded Banneker-Douglass Museum in Annapolis. Annapolis has been busy recognizing Maryland’s historic African American achievements and landmarks in the last decade. The solemn and expansive monument to U.S. Justice Thurgood Marshall was appropriately built next to the Maryland State House, in Annapolis the state capital. The official reason for its placement location is to honor Marshall’s achievements as a native son. But the monument’s location is also an inspiring measure by the state of Maryland to make amends for discriminating against Marshall, when he applied to the University of Maryland Law School.

A memorial plaque recognizing where Kunta Kinte first touched American soil is accented with a stature of Alex Haley reading to children. If you search in the Maryland State House, there is even a memorial honoring Matthew Henson as the first man on record to touch the North Pole. Considering the history, culture and deep sense of belonging in this area, a drive to Highland Beach and Annapolis is always rewarding to the culture-centered traveler.