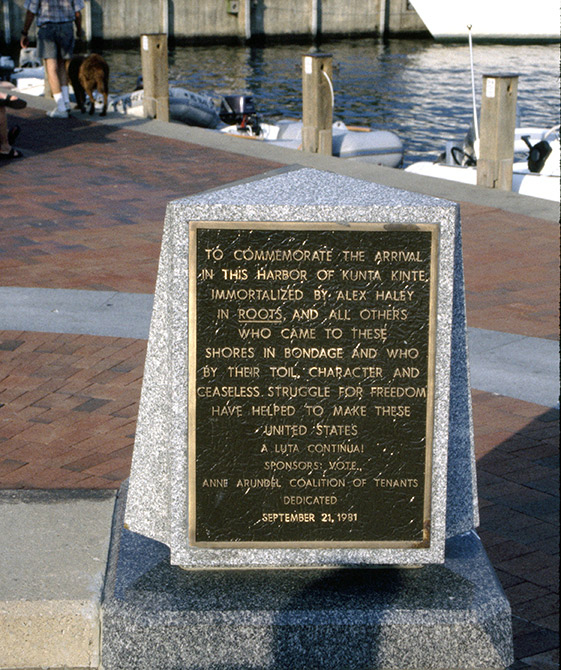 Asbury United Methodist Church
This congregation founded in 1803, built the current structure in 1888; the church remains a religious and cultural force in the West Street Black community of Annapolis; tours available by appt; Sunday worship 11a
ADDRESS: 87 West Street
PHONE: 410-757-2995

Kunta Kinte Plaque & Alex Haley Memorial
This plaque honors the famous ancestor of Alex Haley, author of Roots and the Autobiography of Malcolm X), Kunta Kinte arrived at this portside location along with 97 other enslaved people in 1767; the nearby life-size bronze memorial of Alex Haley reading history to attentive children is unique in America; a 14 foot diameter Story Wall adorns the site as well
ADDRESS: northwest corner of Compromise Street at Randall

William H. Butler House
In 1863, William H. Butler “a free person of color” purchased 148 Duke of Gloucester Street; a builder, Butler was one of the wealthiest free blacks in the city; serving on the Annapolis City Council from 1873-1875, he became the first African American in Maryland to be elected to public office
ADDRESS: 148 Duke of Gloucester Street

Maynard-Burgess House
John Maynard was born a free African American in Maryland about 1811 and died in Annapolis in 1875. He purchased this house in 1847; Between 1834 and 1845 he purchased and freed his wife, her daughter and his mother-in-law; after his death in 1874, his family maintained the home as a boarding house; in 1914 Willis Burgess purchased it and his family owned it until 1990; being renovated as a museum depicting 19th century African-American life in Annapolis.
ADDRESS: 163 Duke of Gloucester Street

John Smith House
Although this small house was built between 1735 and 1747, around 1820 it was purchased by John and Lucy Smith, a free black couple; John Smith operated a livery stable at the rear of the site, his wife, “Aunt Lucy,” operated a bakery at Main and Green Streets.
ADDRESS: 160 Prince George Street

Eastport Colored School
A former three-room school house for the education of Black children in Eastport, which was not a part of the city of Annapolis in the early 20th century; the building is now home to the Seafarers Club, an organization of African-American mariners
ADDRESS: corner of Third Street and Chester Avenue

Stanton School & Community Center
Listed on the National Register of Historic places in 1983, Stanton School had its roots in a private school just outside of the city; in 1903 the present school was built and became a public school for African-American children; also served as the first black high school and subsequently became a junior high; the neighborhood was significantly changed by urban renewal efforts. 92 West Washington Street.
ADDRESS: 410-295-5519

St. Anne’s Cemetery
St. Anne’s Cemetery was the only public burial ground in Annapolis until the mid-19th century; John Maynard, members of the Butler and Bishop families, and other early African-American families are buried here. Free blacks were buried on or near West Hill.
ADDRESS: Northwest Street at Calvert Street

14 Fleet Street
The Ideal Hotel was built in the 1920s; once a drugstore and hotel, it served African American watermen and tradesmen.
ADDRESS: 14 Fleet Street

48 Fleet Street
Susan Wright built 48 Fleet Street in 1897 and left it to her daughter and son-in-law, Susan and Joseph McGowan, who were employed at the U.S. Naval Academy. The property is still owned by their descendants; private residence.
ADDRESS: 48 Fleet Street

John Smith House
This home was built between 1735-1747. John and Lucy Smith, a free Black couple, purchased this house around 1820; John operated a livery stable in the back and Lucy operated a successful bakery.
ADDRESS: Main and Green Streets