Tour de East Coast comes easy for me. I grew up in New York City and during my college days partied up and down the east coast from Florida to Maine. Though living in sports-minded California for the last 25 years, I only became an avid cyclist 4 years ago. I also started designing African American-centric cycling jerseys, including a jersey featuring major cycling venues from my memories, jogging along the Charles River, Greek Picnics in Fairmount Park, loft parties in Brooklyn and walking along the Potomac River. – Roy Taylor

Before leaving, I stopped at my bike shop. I found a bike box, removed the pedals, seat and handlebars, packed my bike carefully and shipped it as luggage on my flight. I flew out of San Francisco, Friday and landed during a thunderstorm at Dulles, VA at 1am Saturday morning.

The next morning, I unloaded my bike, reassembled it and went to Rock Creek Springs Trail in Silver Springs, MD. I was supposed to meet the Black Ski Cycling Club, but was late due to flight delays and my resulting lack of sleep. Hence, I did the cycling trail on my own. The Rock Creek Springs Trail is nestled behind Silver Springs, MD with wooden bridges traversing shallow streams, thick foliage, wooded areas, historic barn and horse stables. It had lots of changing venues that seemed far from the noisy congested streets of nearby DC. 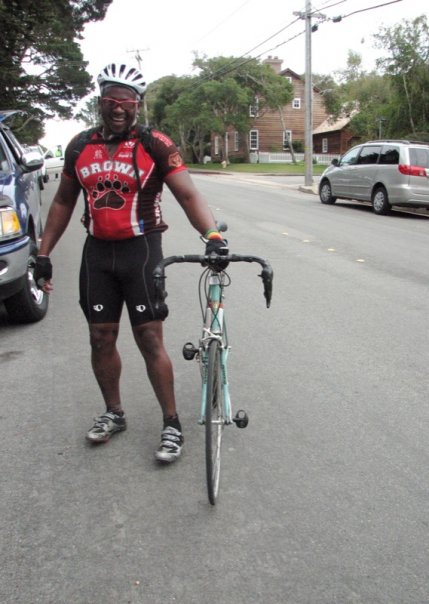 Sunday, I went out to watch the start of the Reston Century in beautiful Virginia. I met a buddy of mine, who was doing the “century”, thats biker speak for 100 miles. I went to Rosslyn, VA to ride the Valley Forge Trails. Valley Forge Trail presents wide trails and great vistas of DC monuments while snaking along the Potomac River. I followed the trail past the National Airport down to Alexandra, Virginia and back. Crossing the Potomac River on the 14th Street Bridge into DC, I rode past many monuments then doubled back across the river via Arlington Memorial Bridge for a stirring ride through Arlington Cemetery, and then gazing over my shoulder at vistas of our nation’s Capitol as I headed back to Rosslyn.

The next day, I drove to Baltimore and sailed with a member of the Universal Sailing Club, an African American sailing club based out of Baltimore. We sailed from Baltimore’s Inner Harbor past the historic Domino Sugar Wharf, past Fort McHenry National Monument, under the magnificent Francis Scott Key Bridge to Fort Carroll. Sailing further until Baltimore’s Patapsco River meets the Chesapeake Bay, I was surprised to find the waters calmer than the San Francisco Bay, the winds well behaved and the sunset breathtaking.

On Tuesday, I met up with the Blazers Cycling Club in Manayunk just northwest of Center City, Philadelphia. We rode through the trails and roads of Fairmount Park. The Schuylkill River cuts through the middle of the park with old architectural bridges, railroad trestle, boathouses, monuments and various playing fields. We covered 25 miles that evening and then, I met with another member of the Blazers, Wednesday morning. We covered another 30 miles. Fairmount Park is one of the largest urban parks in the US. It is a most do for cyclists headed to Philadelphia. We left the park occasionally, but most of the ride was within the park boundaries.

As a kid in Brooklyn, I always liked the view of the Palisades in New Jersey behind the George Washington Bridge. It is a pristine, underdeveloped stretch of coastal trails sandwiched between shear cliffs and the Hudson River, in other-worldly contrast to Manhattan skyscrapers just across the river. So Thursday, I did the Palisades, riding from Fort Lee on the Henry Hudson Drive to Alpine, keeping time with a slow barge going up the Hudson River. My view was filled with lots of stonewall fences, historic ruins, including turn of the century bathhouses and hunting lodges abandoned long ago.

It rained on Friday, so I canceled my Central Park and Harlem River Drive ride down to Chelsea Pier. Too bad. I planned to ride on Saturday with the Major Taylor Ironmen or Major Taylor NY-NJ clubs, but it also got rained out. As a make-good substitute, I donned rain gear and rode from Brewster, NY to Ridgemont, Connecticut for Dunkin Donuts and coffee!

In all, I covered 6 states plus DC, completing over 150 bike-miles in a week. Lots of great trails along the east coast, many were away from cars. I got a lot of help from members of various AA cycling clubs that I contacted via the National Brotherhood of Cyclist and the Black Cyclist and Black Sailors FB Groups. Not a bad way to revisit part of my youth.