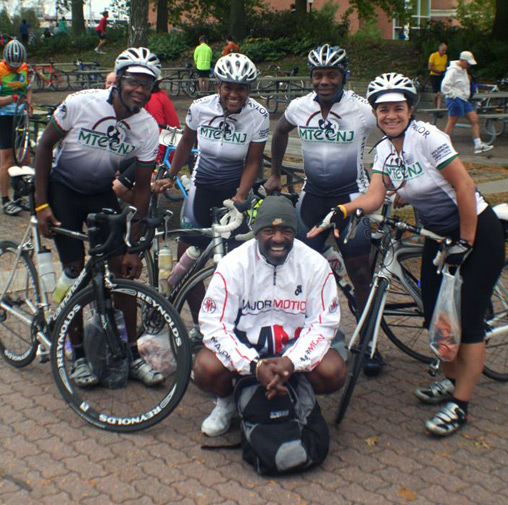 My Seagull Century journey actually started about three years ago. I first heard about it through a friend and for me, it came to be much more than just another century. – Virgil Ford, Major Motion Cycling Los Angeles

Several years ago, a friend shared a vision of identifying where the African American cycling clubs were locate across the country, especially those named after Marshall “Major” Taylor. Maybe they were all part of a cycling organization that promotes cycling as a healthy alternative in the minority community and ultimately, sponsor local talent by hosting an annual ride of its own. This would also serve as a hub where one could look for rides when traveling with the bike. Just over two years ago, the National Brotherhood of Cyclists started taking shape and one of the items on the agenda was to get the members together for a group ride. The Seagull Century in Salisbury, Maryland was chosen as the venue because of the historically large number of black cyclist that attended.

I’ve been religiously logging mile after mile in many of the endless annually organized centuries and half centuries throughout Southern California. I really didn’t need to be traveling across the country just to do another 100-mile bike ride. This one had that one special element added to it that none of the others had. I knew I’d be surrounded by a large number of people that look like me and I really wanted to experience it.

There were several times during the planning process that I thought to myself, “This is too much!” I needed to get my bike to the east coast and I didn’t feel like I could depend on the airlines to safely get it there for sure so I felt I had to FedEx it for piece of mind. I didn’t want to have to dismantle it too much so decided to get a re-useable container that would enable me to almost take it out and ride it. My wife and I’ve never been to the east coast so I thought I’d take her along and we could stop by and see Obama while going through DC. I had to rent a vehicle big enough to transport the bike case because FedEx wouldn’t hold it for me in Salisbury, Maryland, if I shipped it by ground. Good thing I knew someone in Annapolis, Maryland. Forecast for the day of the ride, plus intermittent showers.

At long last, the day has come and we’ve landed in DC, got the rental and headed out to pick up my bike. Through Facebook, I had previously re-united with Lisa, who is a friend from my Air Force days and she offered to receive my bike from FedEx (this saved me $$$). This was perfect because she lived along the route I had to take to get to Salisbury. I hadn’t seen her in 25 years and she looked just the same! It was so cool to see her again. She and her husband are living well. A 2-hour drive later, we get there and it’s a quiet beach city, cold and windy … nothing like the beach cities in Cali. Glenn and Lisa did tell us it was the off-season though and that there was an annual “cruisers” car show going on that weekend. For Sure!! Hot rods were everywhere! I even ran across a couple of “young” rednecks to my surprise.

During the gathering for the pre-ride on Friday morning is when I finally start seeing some of the “NBC” group. There was a group from New Jersey who rode their bikes 300 miles to get there. I met groups from Pittsburgh, Atlanta, Ohio, Philly, Houston, Detroit, Oakland and several different groups from DC. It was amazing to see so many fit looking brothers and sisters, young and old with bikes. The ride was about a 40 mile out and back that featured 20 miles of headwind on the return leg. There were about 60 of us that got together for dinner that evening.

The rain came as I was about 20 minutes from the start line on the day of the ride and I’m thinking…DAYUM but oh well! I wasn’t going to let it ruin my parade but I was really disappointed that I couldn’t take my camera out so I could show my club mates in Cali what I was seeing. There were black clubs everywhere and I was truly amazed at the sight! My group of about 40 waited about 30 minutes until the rain stopped before we headed out. There was an incredible number of cyclist on the road. It seemed to have taken forever to get out of the turns before we were out of the city and onto open road. It was wet but not raining and I was in a pace line of about 20 guys and we agreed to bypass the first stop at the 23 mile point. We were rolling at 25-28 mph seemingly forever! When we passed the first stop I hit my lap counter and it read 1 hour 6 minutes and a few seconds. I hung with this group for another 10 miles or so when I felt that first twinge of a cramp. After I recovered, I caught onto the next group and made it to rest #2 at the 40 mile point………just over 2 hours in!

We all rolled out after refueling and it picked up right where it left off. I didn’t realize it ‘till later but they were on a mission to do a sub-five hour century. There was a guy filming our effort for sale and review later that evening and every time he caught up to us, the speed picked up 5-10 mph because everyone wanted camera time in the front. These guys were incredibly strong, for a long time. I never made it to the front while the camera was around. I simply couldn’t hold on long enough. By now we’re just over 60 miles in and I was fighting off cramps to the point where I couldn’t accelerate with them when they surged so I’d let them go and catch the next group coming threw. There was always a pace line to join in. At rest stop at mile 80 there was ice cream and apple pie and I’m sure that’s what got me to finish line. This was an overcast day with drizzles here and there. I guess I wasn’t drinking enough while trying to hang onto the wheel in front of me. I started cramping really bad and literally had to be pushed for periods during the last 4 miles in. It was a great ride though! A truly wonderful experience that left me with a totally gratifying sensation of joy and I’d do it all over again next year.

Computer Stats on My Bike

Time with wife and the National Brotherhood of Cyclists … PRICELESS!