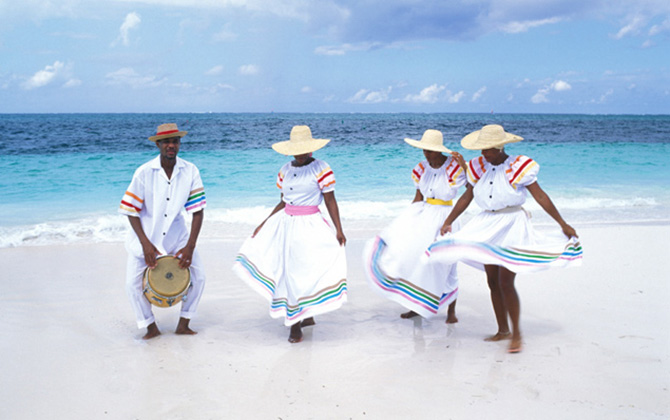 A beach social in Grand Turk welcomes you

Grand Turk, the capital of Turks & Caicos, is located 575 miles southeast of Miami. At only 7 miles long by 1.5 miles wide, everything is a short walk or ride away. These features make it seem like a drop in the sea — hardly what you’d think of for a Caribbean vacation. So what’s “Grand” about Grand Turk and how does a Caribbean Island get such a name as Turk?

Did the Turks colonize it? Is it famous for Turkish baths? No and No. The name comes from a species of cactus on the island, the Turk’s Cap Cactus, which has a distinctive cap reminiscent of an Ottoman fez originating from Turkey.

Grand Turk contains capital, cultural and financial center, Cockburn Town, of the Turks & Caicos island chain. Grand Turk gained international attention in 1962 when John Glenn’s Friendship 7 Mercury spacecraft landed in the vicinity of Grand Turk Island off the southeast shoreline. The country is quick to remind you of that historic event with its replica of Friendship 7 at Grand Turk’s airport and another at its popular Grand Turk Cruise Center.

If you live in a city with lots of grey skies, you’ll love 350 days of sunshine at Grand Turk. That continuous sunshine, unspoiled waters, English language and small population make it great tropical getaway, but not too far away.

As a historic attraction, many Caribbean countries brag that Christopher Columbus arrived at their island on his first trip to the New World in 1492. Grand Turk is in that conversation. Studies of Columbus’ journals show that his descriptions of “Guanahani”, the landfall island, more closely fit Grand Turk than San Salvador Island or Samana Cay in the Bahamas.

The topography of Grand Turk ranges from beautiful beaches to limestone plateaus. Low profile tropical vegetation is abundant in the undeveloped areas of the island. These are perfect bio-diversity conditions for mangroves, wading and migratory birds, and large reptiles. The Rock Iguana is a shy, harmless reptile who loves these conditions and tries to avoid human settlement.

Rock Iguanas were once plentiful throughout Turks & Caicos, until the invasive species of cats and dogs were introduced. Though you may see one or two on Grand Turk, their famous refuge is Little Water Cay, where cats and dogs were not introduced. Its a small nearby island inhabited by 2,000 Rock Iguanas. A day-trip destination from Grand Turk, Little Water Cay has a boardwalk through its interior for easy viewing of these amazing creatures.

Blessed with clear, turquoise waters and numerous beaches, making it heaven for the beach enthusiast who prefers more privacy. The island also boasts migrating humpback whales (January through April), an outstanding protected coral reef that drops to 7,000 feet along the west side of the island. With spectacular coral reefs on the west wall, Grand Turk has a well-earned reputation of being one of the finest diving destinations in the world.

Although Grand Turk is a getaway off the beaten path, a dive center, eco-tourism and cruise destination, visitors’ palates need not suffer. There are a variety of authentic local restaurants offering super-fresh shrimp, calamari, conch, lobster and other Caribbean specialties. Maybe you should drop in.