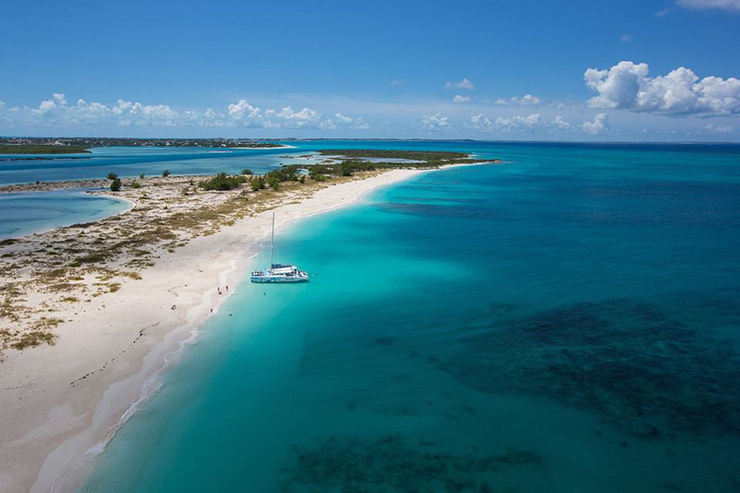 A long beach in Grand Turk

Governor’s Beach
DESCRIPTION: Found on the west coast of Grand Turk, the site gets its name from being the location of the Governor’s mansion, which is found a short distance away. Sheltered from east-southeast tradewinds, this beach offers a wide strip of white sand, shallow clear water, and a thick Casuarina Tree grove — you’ll like it for shade on the many hot days. Some rocky patches can be found in areas, but not much fish life. The beach is typically calm, when there is a high ocean swell Governor’s Beach can experience some low rolling waves. Governor’s Beach is part of the Columbus Landfall National Park. Its a popular beach snorkelling spot due to ease of access and good underwater visibility. Apart from a small collection of rocks, the beach offers a beautiful white sandy bottom. Mega One Triton is a large grounded ship at the beach. Formerly an oil rig service vessel, it washed ashore during Hurricane Sandy in 2012. Attempts were made to remove the vessel, but due to its size and cost, those efforts are unsuccessful. There’s no fishing and no lifeguard on duty, but its still a good family beach.
WEBSITE: https://www.visittci.com/grand-turk/governors-beach

Pillory Beach
DESCRIPTION: a quiet and sheltered coastline that offers soft white sand and clear ocean water. It doesn’t have the crowds from cruise visitors, like Governor’s Beach. Some patches are excellent with a clean sandy bottom. Other areas tend to be a bit rockier. Casuarina Trees provide shade at a few spots. The coast continues two miles towards North Creek and the North Reef bluff with the Grand Turk Lighthouse. Since it is closer to open water, some historians believe that Christopher Columbus made landfall on Grand Turk, and not San Salvador in the Bahamas. This beach is the probable landfall spot, if he did arrive on Grand Turk. For that reason, its part of the Columbus Landfall National Park. Pillory Beach is within walking distance of restaurants, shops and craft stands on the northern side of Cockburn Town. That location comes is handy when you want a cocktail. A restaurant at the Bohio Dive Resort serves lunch & drinks with a beachfront setting. As for snorkeling, the beach as rock shelves and gullies, formed from ancient corals that support small amounts of reef fish, along with an occasional sea fan. Fish sightings include schools of French grunts and yellowstriped goatfish, parrotfish, and stingrays. There’s no official beach access, simply pick a spot that looks good and park. In 1992, Pillory Beach was renamed Guanahani Beach by the Turks and Caicos government in honour of the indigenous Taino’s name for the island of Columbus’s first land fall in the New World. Unfortunately, the name did not catch on.
WEBSITE: https://www.visittci.com/grand-turk/pillory-beach

Boaby Rock Point
DESCRIPTION: Located on the southernmost point of Grand Turk, this secluded area has patches of beach between rocky sections and Casuarina trees line the coast. Beachcombing is far superior due to wave patterns and the fewer visitors. The point is one third of a mile from the Grand Turk Cruise Center. There is worthwhile snorkeling. The
snorkeling here has some rewards – sea fans and coral at the Boaby Rock Point reefs. Two of the best shore snorkelling spots on Grand Turk can be found several hundred feet up the eastern coast in very shallow water and extend out about 300 feet from the beach. There are quite a few different types of coral thriving on the reefs, as well as yellow sea fans and vibrant fish life.

East Side Beach
DESCRIPTION: Its the longest beach on Grand Turk, but doesn’t offer the best swimming conditions. It’s directly exposed to the Atlantic Ocean so seaweed grows close off the beach, plastic flotsam occasionally floats in. That makes it a good beach for riding horses. Grand Turk’s main riding stable is found at the north end of this beach. Tracks lead down to the Beach from Lighthouse Road.

White Sands Beach
Its a secluded 1.5 mile stretch of coast on the southeast of Grand Turk. The water here is very shallow with large amounts of seaweed. For cruise ship visitors looking to explore on their own, it’s a one to two mile walk down the beach from the Grand Turk Cruise Center. Though its a poor location for swimming or snorkeling, bluffs and salinas near White Sands Beach is a great place to discover the adjacent Hawkes Nest Salina and can be a reflective sea of white at times. To the north of White Sands Beach are the wetlands of South Creek, inland red mangrove-lined waterways that shelter birdlife.