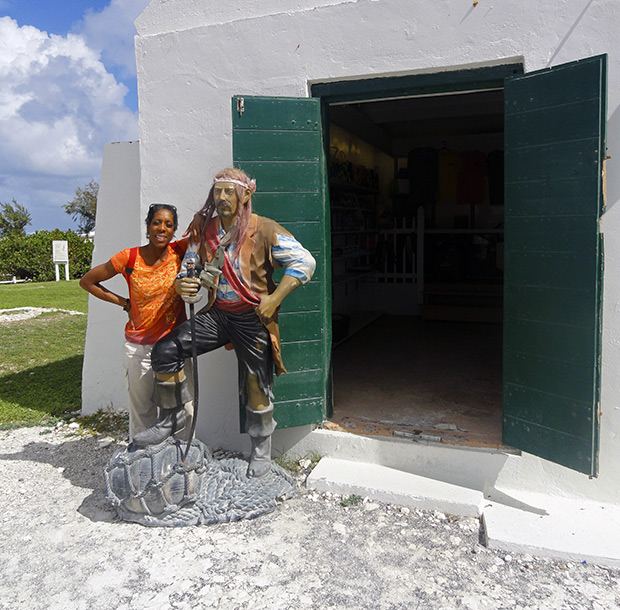 Lysa Allman-Baldwin and the Pirate near Grand Turk Lighthouse; (c) Soul Of America

Grand Turk Cruise Center
DESCRIPTION: Like on many other Caribbean islands, Jimmy Buffet’s Margaritaville provides a fun family ambiance. You can also stroll through a 45,000 square foot shopping center, which includes a large duty-free shop, high-end jewelry stores, gift shops and eye-catching locally crafted souvenirs. On the south side of the Grand Turk Cruise Center is Splashdown Grand Turk, a free, 3,500-square-foot attraction offering a unique look at the relationship between Grand Turk history and NASA’s space flight missions, namely astronaut John Glenn’s historic splashdown in the space capsule “Friendship 7” here in 1962. In addition to a replica of the capsule, you’ll find a scaled 20-foot tall Atlas rocket and full-size, three-dimensional replica of Glenn’s historic spacesuit and replicas unique to the Mercury space program. The free pool area includes the Grand Turk FlowRider®, a dual sided, self-contained water attraction that simulates perfect expansive body of water conditions for stand-up riding, body boarding or knee boarding on an artificial wave, and the only attraction of its kind at a cruise port facility. Space is limited on the Flowrider, so reserve your spot through your cruise line well before excursion. A long the spectacular beach, relax in a covered beach chair or rent a private cabana and enjoy a massage.
WEBSITE: http://www.grandturkcc.com

Grand Turk Lighthouse
DESCRIPTION: Built in London in 1852 and shipped to Grand Turk, the Grand Turk Historic Lighthouse is still in use today. A prized historic site protected by the National Trust, it stands some sixty feet tall and is one of the island’s most recognizable landmarks on land and sea, watching over the northern tip of the island. The lighthouse property encompasses several smaller structures including the keeper’s cottage, a picnic area, and a great viewing spot for the whales that migrate through here from February to April. The lighthouse hill overlooks North Creek, a lake that some historians believe is the spot that Christopher Columbus, or Ponce de Leon—depending on which historical account you follow — first encountered in the late 1400s.
ADDRESS: Cockburn Town
WEBSITE: http://www.hmdb.org/marker.asp?marker=40367

Turks & Caicos National Museum
DESCRIPTION: Located in Cockburn Town in The Guinep House, one of the oldest stone buildings on the islands, the Turks & Caicos National Museum chronicles the culture and history of the islands, as well as the legend of the oldest European shipwreck discovered in the Western Hemisphere, the Molasses Reef Wreck. Over 1,000 shipwrecks have occurred here, dating back to the mid-1800s. As spectacular as the reefs in this area were back in the day, and remain so today, dropping to an astounding 7,000 feet just a few minutes boat ride from shore, they were treacherous for ships. Even now, instead of docking on the larger island of Providenciales, the cruise ships come into Grand Turk; of particular historic note here is the world’s only gallery dedicated to the Lucayans Indians, the original island inhabitants dating back to 700 AD, all of whom completely disappeared by 1520. The gallery features a 1,000 year old Lucayan paddle, the only Lucayan wooden artifact to be found at the precise location it was lost in the world; the wide range of exhibits and displays here encompass nature and the environment, slavery, special collections and more, including memorabilia relative to astronaut John Glenn’s historic splashdown in the space capsule “Friendship 7” here in 1962. A museum Archive and Museum Library, research facilities, and Museum Shop offering a range of books, crafts, and posters round out the experience here.
ADDRESS: Front Street
WEBSITE: http://www.tcmuseum.org

St. Thomas Anglican Church
DESCRIPTION: Built in the early 1820s by Bermudian settlers, features the island’s time-honored white and scarlet façade; it was the first church built on the island and the second church built in the Bahamas archipelago.
ADDRESS: Osborne Road, Cockburn Town

Old Roberts Family House
Recognized as one of Grand Turk’s most historic homes, the Old Roberts Family House was built in the 1850s and named after Benjamin H. Roberts; Roberts was one of the Grand Turk Lighthouse keepers and a carpenter who is said to have built the old salt wharf; the home’s location is opposite Roberts Alley which is also after the original family.
ADDRESS: Front Street

Turks Head Inn
Embodying the charm and sophistication of grand British West Indies architectural style and rumored to have once served as the British Governor’s guest house, the historic, oceanfront Turks Head Inn, was built 150 years ago as the Methodist Manse. Converted into an all-suite accommodation in 2005, the Inn was honored with four stars and the distinction of being the Best Guesthouse in the Turks and Caicos Islands by the Turks and Caicos Government Tourist Bureau, and Frommers Turks & Caicos Travel Guide named it as one of their favorite luxury resorts.
ADDRESS: Front Street
WEBSITE: http://www.grandturkinn.com