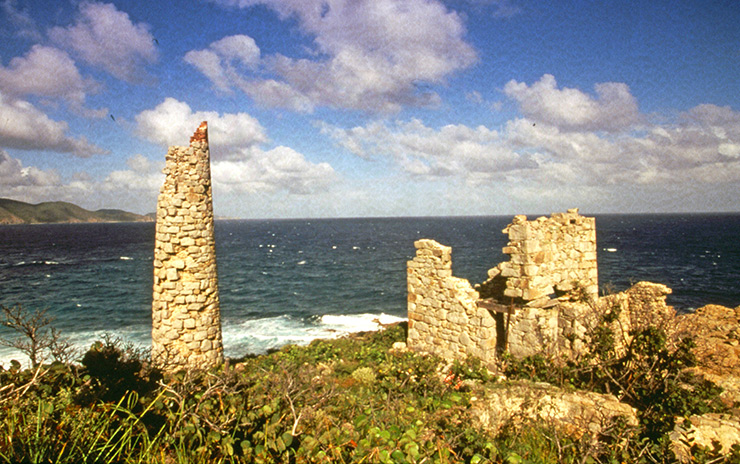 The first recorded settlement was by Arawak Indians who came from South America between 100 BC-200 AD. Sketchy evidence suggests that they may have been preceded by Ciboney Indians. The Arawak left pottery in excavations around Belmont, Cane Garden Bay, Smuggler’s Cove and other parts of Tortola. Their imprint on the islands lasted until the 15th century, when they were displaced by the Caribs.

In 1493, Christopher Columbus name this series of islands, Santa Ursula y las Once Mil Vírgenes (Saint Ursula and her 11,000 Virgins). It was later shortened to Vírgin Islands. He is also named Virgin Gorda (the Fat Virgin), which he thought to be the largest island in the group. The Spanish claimed the islands, but never settled the Territory. Englishman John Hawkins visited the islands three times, firstly in 1542 and then again in 1563 with a cargo of slaves bound for Hispaniola (Dominican Republic). On his third visit, he was accompanied by Francis Drake. Drake returned in 1585, and is reported to have anchored in Virgin Gorda prior to his attack on Santo Domingo. Drake returned for the final time in 1595 on his last voyage, during which he died. The main channel in the British Virgin Islands was named in his honor.

In 1598, George Clifford used the islands as a staging ground for his later attack on Puerto Rico, during conflicts between England and Spain. Dutch privateer Joost van Dyk organized the first permanent settlements in the Territory in Soper’s Hole, on the west end of Tortola. By 1615, van Dyk’s settlement was recorded in Spanish contemporary records, which noted its recent expansion. He traded with Spanish colonists in Puerto Rico and farmed cotton and tobacco.

By 1625, van Dyk was recognized by the Dutch West India Company as the private “Patron” of Tortola. During the same year, van Dyk lent supported the Dutch who sacked Puerto Rico. In retaliation that year, the Spanish laid waste to Tortola. Joost van Dyk escaped to the island that would later bear his name. He later moved to St. Thomas until the Spanish returned to Puerto Rico.

The Dutch built large stone warehouses at Freebottom, east of Road Town, to facilitate exchanges of cargo between North and South America. This site was later developed as Fort Charlotte. They stationed troops at the Spanish “dojon” near Pockwood Pond,. In the 21st century, it is called “the Dungeon”.

In 1640, 1646 and 1647, Spain attacked Tortola in different assaults. Ultimately, they massacred the Dutch, and next attacked Road Town, killing most inhabitants.

In 1665, the surviving Dutch settlers on Tortola were attacked by a British privateer, John Wentworth. He captured 67 slaves and took them to Bermuda. In 1672, England took control of the Virgin Islands at the outbreak of the Third Anglo-Dutch War. By the Treaty of Westminster of 1674, the war ended, with both sides splitting up island assets.

In 1678, the Franco-Dutch War ended, and the Dutch returned their attention to Tortola. After lots of negotiation with the British and ineffective treaties, the British took control of Tortola and Virgin Gorda. Nevertheless, relationships with the Danes were strained. Nearby St. Thomas became a base for pirates and privateers which the Danish Governor either could not or would not stop from raiding ships in Tortola, which was developing slave plantations. 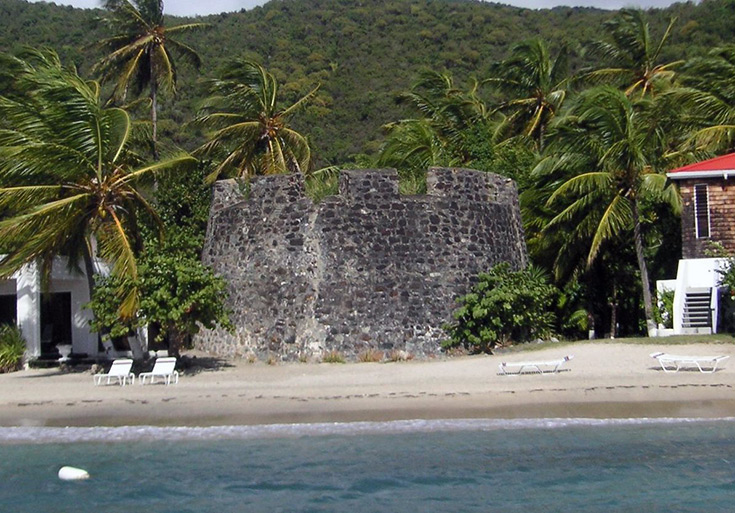 In 1717 there were 547 black people in the Territory — all of whom were assumed to be slaves. By 1724, there were 1,430; and 1756, there were 6,121. The Quaker settlement in the British Virgin Islands from 1727 to 1768 established opposition to slavery within the Territory earlier than most other Caribbean islands. It also sparked slave revolts in 1790, 1823, 1827, and 1830, though in each case, they were quickly put down. In 1831, a plot was uncovered to kill all of the white males in the Territory and to escape to Haiti with all of the white females. The plot caused widespread panic. Military assistance was drafted from St. Thomas to put it down.

The abolition of slavery occurred on 1 August 1834. Today it is celebrated on the first Monday, Tuesday and Wednesday in August in the British Virgin Islands. The original emancipation proclamation hangs in the High Court. In 1834 the Territory was an agricultural economy with two main crops: sugarcane and cotton. Of the two, sugar was the considerably more lucrative export.

Shortly after the abolition of slavery, the Territory was rocked by a series of hurricanes in 1837 and 1842. In 1846, the commercial and trading firm of Reid, Irving & Company collapsed, closing 10 sugar estates that employed 1,150 people. Another hurricane in 1852 destroyed most remaining sugar works.

In 1853, the fat of the island changed forever. First tax riots broke out triggering mass violence on both sides. cholera killed nearly 15% of the population. This was followed by an outbreak of smallpox in Tortola in 1861, which caused 33 deaths. The sharp drop in lan values enabled newly freed blacks to purchase land and start a small farming economy that persists today. In 1901, the Legislative Council was finally formally dissolved, and the islands were then officially administered through the Governor of the Leeward Islands. The Territory economy deteriorated. Emigration was extremely high to St. Thomas andthe Dominican Republic.

In 1951, external capital helped farmers shore up their crops. In 1953, the Hotel Aid Act was enacted to boost the tourism industry. Beginning 1958, BVI vastly improved roads, linking West End to the East End of Tortola, and joining Tortola to Beef Island by a new bridge. The Beef Island Airport (renamed after Terrance B. Lettsome) was built shortly thereafter. In 1967, the new constitution transferred more powers and introduced true Ministerial Government to the British Virgin Islands. Elections followed in 1967, and Lavity Stoutt was elected as the first Chief Minister of the Territory. That led to substantial growth in island tourism.

In 1984 the British Virgin Islands enacted the International Business Companies Act, under which an offshore company exempt from local taxes could be formed. The development was only a limited success until 1991, when the United States invaded Panama to oust General Manuel Noriega. At the time Panama was one of the largest providers of offshore financial services in the world. But the business fled Panama subsequent the invasion, and the British Virgin Islands was one of the main beneficiaries.

Fast forward to Hurricane Irma in September 2017, that caused extensive damage and loss of 4 lives in Tortola. Later that month, Hurricane Irma was not as devastating, but population dropped 11% after both events. Today, the BVI is in full rebuild mode.