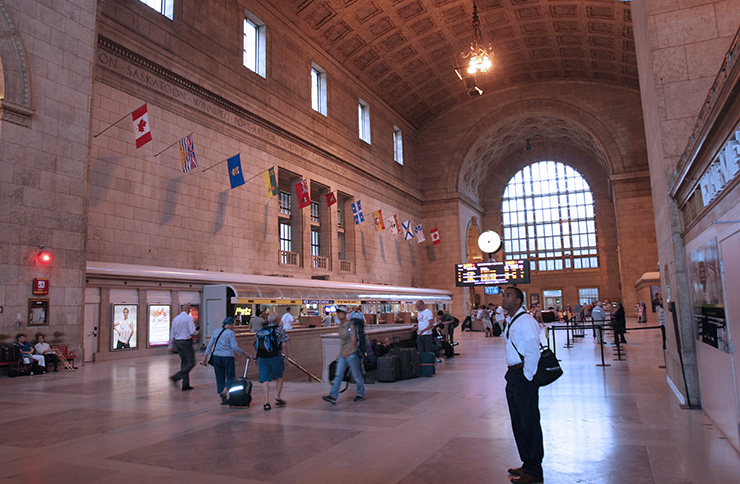 Toronto-Pearson International Airport (YYZ) is the busiest airport in Canada and has United States border pre-clearance. Hence, flights from the USA are considered “Transborder” rather than “International” flights. The airport is named in honor of Lester B. Pearson, a Nobel Peace Prize Laureate and 14th Prime Minister of Canada. Star Alliance and SkyTeam have a large frequent flyer lounges within the airport. Pay-In lounges are available to all passengers, regardless of airline or frequent flyer status. TORONTO-PEARSON INTERNATIONAL AIRPORT MAP

Check the luggage policy for your airline and confirm your flight 24 hours in advance. Make a copy of your passport/flight itinerary/hotel reservations and leave it with someone at home. Pack headache and other medicines in your hand luggage.

About 75 air carriers transport more than 38 million annual passengers to/from 130 destinations. Runways were recently lengthened to handle a giant Airbus A380 jet. There is free WiFi through the airport and a Terminal LINK Automated People Mover runs between airport terminals and the Parking Lot.

Taxis and shuttle buses await you at the Arrivals roadway. UP Express is a new express rail link between the airport and Union Station in downtown Toronto in only 25 minutes. Purchase the ticket machine at the airport, which accepts credit/debit cards and bills. Consider purchasing your roundtrip ticket marked for usage on a later date. UP Express runs 19.5 hours per day every 15 minutes.

Toronto Union Station is the busiest train station in Canada and handles an average of 250,000 daily patrons. It is located on the south side of the block bounded by Bay Street and York Street in downtown Toronto. The station is served by Via Rail and Amtrak intercity trains:

Built in 1927, the architecture of Toronto Union Station is a Neo-Cololonial colonnade style that has been designated a National Historic Site of Canada since 1975. GO commuter trains and TTC Subway trains serving Union Station make it a favorite of tourists because Fairmont Royal York Hotel, Brookfield Place (home to Allen Lambert Galleria), the Hockey Hall of Fame, Air Canada Centre, Rogers Centre, Metro Toronto Convention Centre, and CN Tower are nearby. Some are connected via an 18-mile underground pedestrian network for protection against harsh winters.

Opened in 1954, Toronto rapid transit was the was the country’s first completed subway system. Locals call it the “subway” and its signage is the “TTC” for Toronto Transit Commission.

Toronto Subway is used by nearly 1.1 million patrons each weekday. Despite only 4 Subway lines and 69 stations that cover 42 miles in Toronto, it attracts over 200,000 more daily passengers than Washington Metro having 6 lines and 91 stations that cover 117 miles. So its stations are as busy as a typical NYC Subway station. Aesthetically, TTC Subway stations won’t win any awards. But every station platform area has a different layout and motif that makes them easy to recognize. On weekdays and Saturdays, TTC trains run every few minutes from about 6am until 1:30am. On Sundays, they run from about 9am to 1:30am. WiFi is anticipated to be functional in all stations by 2017.

Purchase Subway ticket here. TORONTO SUBWAY SYSTEM MAP. As you see from the Subway Map, lines are by color. Trains are named for the last direction stop on their line. Toronto-York Spadina Subway Extension is anticipated to open by late 2017.

Tourists usually purchase Opus cards having 2 trip, 10 trip, daily, weekend, 3-day or weekly trip capacity. Even if you’re a car-only person in America, try the Metro for at least 2 trips in one day, if only to experience this interesting part of Montreal. So plan on spending $6 to $25.50 to use the Metro. Children under 12 ride for free. Visit TTC Fares and Passes for updates on pricing.

Like most Metro Subway systems in America, put the ticket into the slot on the side of the turnstile. It pops out of the top of the turnstile. When the lights turn green, remove it for the turnstile to let you through. If you purchase more than one trip, the Opus ticket will show how many trips you have left.

If you miss your stop or realize you’ve headed in the wrong direction, no need to pay again. Simply get off, walk up the stairs or escalator without exiting through the turnstile, walk down the other side of the station to the opposite track platform.

Toronto is much safer than American metro areas of similar 5-7 million population. A single person can go anywhere on the system in the day time. But at night, there are a few dicey stations outside downtown, so ask your hotel concierge and plan ahead.

Like Metro/Subway systems worldwide, prevent being targeted by pickpockets as a vulnerable tourist. If traveling alone, avoid reading paper maps or tourist books on the Metro. Instead, read the larger paper map or the map on your computer/tablet in your hotel room. With that practice, you’ll be quick and confident reviewing the same map inside the train before de-boarding.

Toronto residents love to visit Toronto Island Park in the warm months. They use this city-operated island ferry service from Jack Layton Ferry Terminal between Bay Street and Yonge Street on Queens Quay.

Toronto is a bicycle town in the warms months, so its common for people to bikeshare. Refer to the Toronto Cycling Network Map, then consider Bike Rental — https://bikesharetoronto.com/bike-rental-toronto  /.