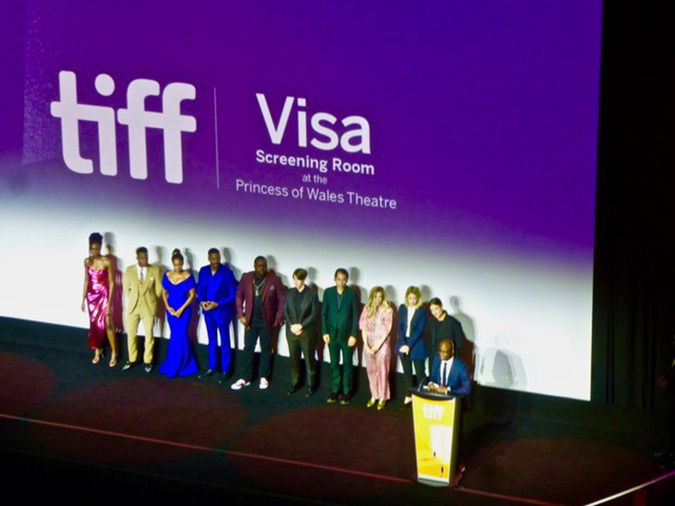 Toronto International Film Festival has been the epicenter of the film industry for over four decades. Movie lovers come to Toronto, home to 2.5 million people from 200 distinct ethnic backgrounds, for a multicultural “film festival vacation.” In-between premieres and mingling with celebrities on bustling sidewalks, they wine, dine, shop, sightsee and have fun. Travelers can enjoy the finest restaurants, museums and tourists sights any time of the year. 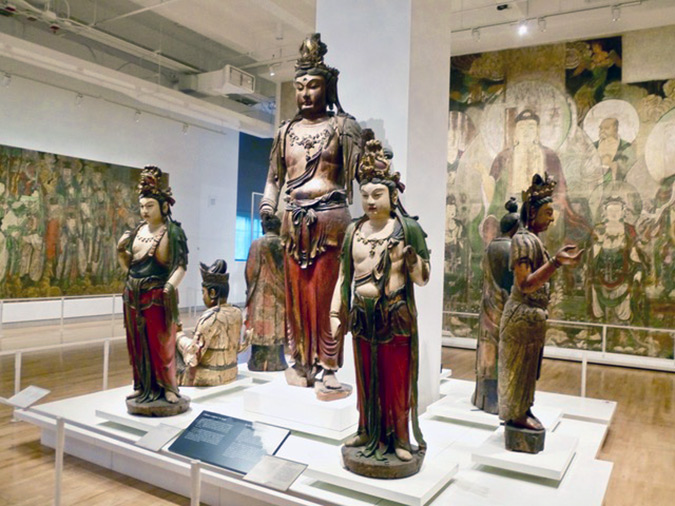 · Royal Ontario Museum (https://www.rom.on.ca/en) –- Put on your walking shoes and get going. The Royal Ontario Museum at 100 Queen’s Park is Canada’s largest and most comprehensive museum and home to a world-class collection of 13 million artworks, cultural objects and natural history specimens featured in 40 gallery and exhibition spaces. The Iris van Herpen: Transforming Fashion exhibit features the Dutch fashion designer’s space age, non-conformist dresses that are often made from 3-D printing, whale bones and synthetic boat rigging. They’re the kind of attire Labelle or Grace Jones would wear. Permanent Galleries attract visitors all year long: e.g. Shreyas and Mina Ajmera Gallery of Africa, The Americas and Asia-Pacific.

· Miku (https://mikutoronto.com) –- The Ningenmi philosophy is the cornerstone of Miku, an extremely innovative Japanese restaurant that is just a stone’s throw away from the Toronto Harbour. The restaurant’s signature style of cuisine is ‘Aburi,’ which applies a flame to sushi, and that heat intensifies the sushi’s flavor. Let the chef make all the hard choices and try the Kaiseki tasting menu with up to five courses. Order a la carte: delectable Miso Soup; tender and rich flavored AAA Sterling Silver Prime Rib; and for dessert the Warm Valrhona Chocolate Matcha Fondant. Stick your fork in it and a warm chocolate spurts out. 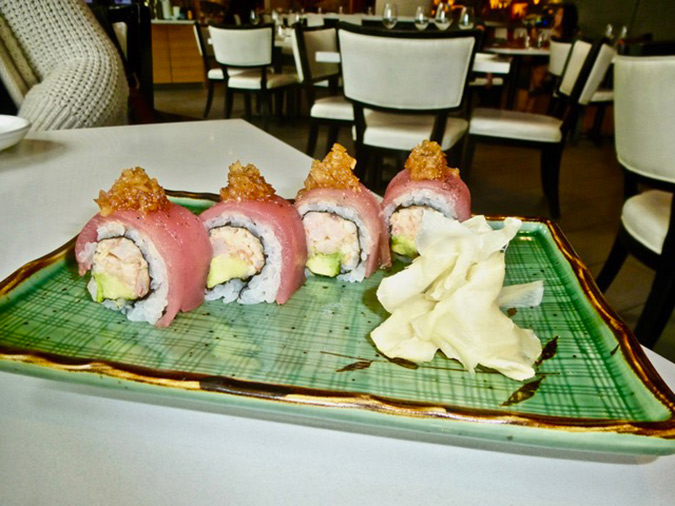 · Toronto Island Park (https://www.torontoisland.com) -– This 570-acre string of small isles is about a mile off shore in Lake Ontario. Canadian geese, deer and mink roam around. Babe Ruth hit his first professional home run at a baseball stadium here, originally built in the early 1900s. These days you can take a sightseeing boat ride — you’ll get the best view of the Toronto skyline through the glass ceiling — to these car-free islands where locals and visitors alike dine at outdoor cafes, sunbathe on beaches (including a nude beach), see fountains and view Bill Bishop Toronto City Airport. Rent a bike for $7 per hour and take a tour.

· Toronto HeliTours (https://helitours.ca) — At Billy Bishop Airport, which is situated on one of the Toronto Islands, Toronto HeliTours offers 6 to 14-minute sky-high rides that give you an eagle’s panorama of the downtown core. The helicopter lifts off like a feather before it flies around the downtown area, swirls around CN Tower and passes over the Rogers Centre stadium (home of the Toronto Blue Jays baseball team) comes into view. Bring the kids and they can take photos from the front seat of the helicopter. 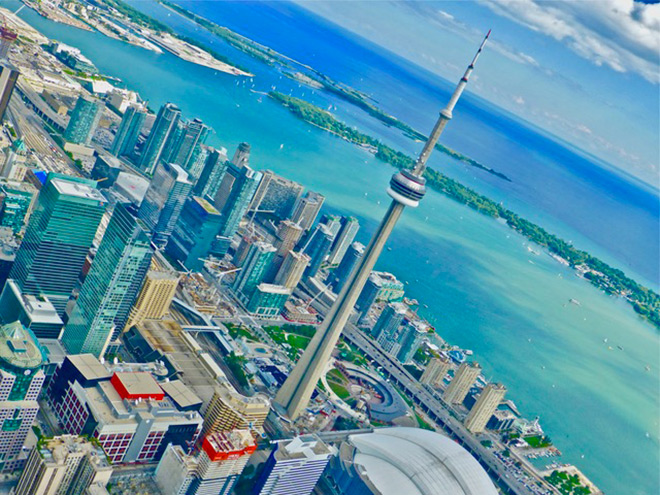 · CN Tower (https://www.cntower.ca/intro.html) — The stately looking CN Tower defines Toronto’s skyline as its needlepoint architecture rises 1,815 feet into the sky. If you’re looking for an extreme urban adventure, for $225 (plus tax) you can get tethered to the tower and walk around the edge of the roof of the CN Tower’s restaurant! It’s a 20- to 30-minute outdoor walk that gives you bragging rights and membership in the EdgeWalkers club. Eating at the Tower’s 360 Restaurant, with its circular, rotating room with floor-to-ceiling windows gives you a constantly changing expansive view of downtown, Lake Ontario and beyond. Choose the Bison Tartare appetizer, the Atlantic Salmon Fillet entrée and Dark Chocolate Tower dessert. 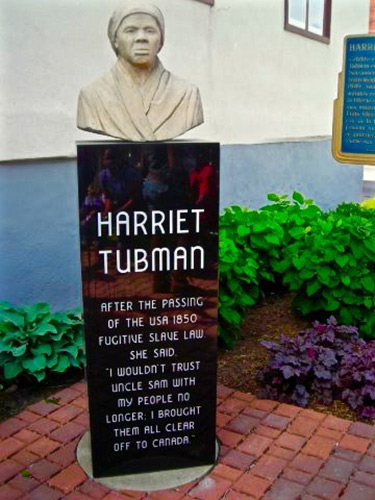 · Canadian Black History Tours (Underground Railroad Era) (http://www.niagaraboundtours.com/Home.aspx) — Abolitionist Harriet Tubman started and ended many of her legendary Underground Railroad rescue missions in St. Catharines, a village that neighbors Niagara-on-the-Lake. People of African descent began settling in St. Catharines, Ontario area around 1788. Tubman helped build and worshipped at the Salem Chapel, British Methodist Episcopal (BME) Church. There are African Canadians living all over Canada who are descendants of slaves who found freedom in St. Catharines. Lezlie Harper Wells, a fifth generation Canadian descendant of a fugitive slave from Kentucky in 1850, through her company Niagara Bound Tours, provides customized excursions around the region that include a Buffalo-Niagara Underground Railroad tour, or a bike tour to where the Anti-Slavery Act of 1793 was signed in Niagara-on-the-Lake, Canada.

· Ki Modern (http://www.kijapanese.com/reservations/) –- KI Modern is one of the best Japanese restaurants in North America. The clientele consists of fancy businesspeople, young hip white-collar workers and tourists who like fine cuisine, tasty sake and Japanese beer like Asahi ‘Super Dry.’ The cozy sushi bar features comfortable wingback chairs and s a very intimate dining experience. Or sit at one of the many private booths for a more private atmosphere. Select the Seaweed Salad to start, then the Bistro Shrimp Tempura with spicy wasabi-garlic cream dip. Dig into the mouth-watering Striploin with yuzu-szechuan peppercorn rub and umeboshi shiso peppercorn sauce. End dinner with the Matcha Cheesecake. 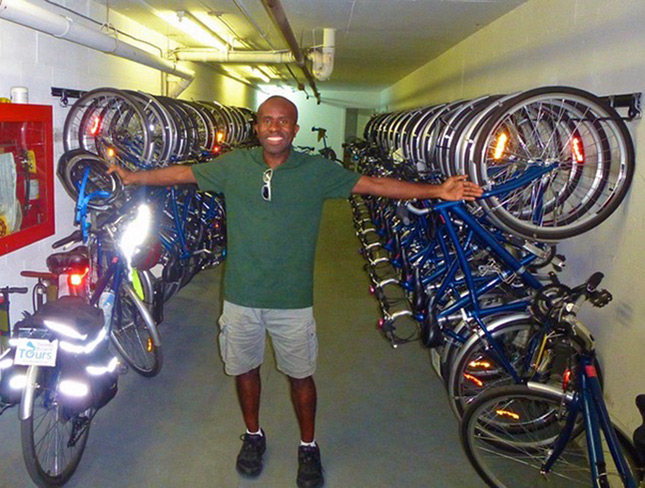 · Toronto Bicycle Tours (https://torontobicycletours.com/contact/) -– Under the guidance of owner Terrence Eta, Toronto Bicycle Tours takes customers on two-wheel rides all over the city. Whether you’re a Tour de France champion, a bike novice or even bike-phobic, you’ll feel at ease on any of TBT’s eight scheduled tours. Their “Heart of Downtown” tour, affectionately known as “Toronto 101,” is perfect for getting a feel for Downtown Toronto and neighborhoods like Chinatown (north America’s oldest) and the multicultural Kensington Market. TBT’s “Twilight” and “AM” tours to the Toronto Islands include a ferryboat trip, visiting the Gibraltar Point Lighthouse, the Royal Canadian Yacht club, the park and beach. 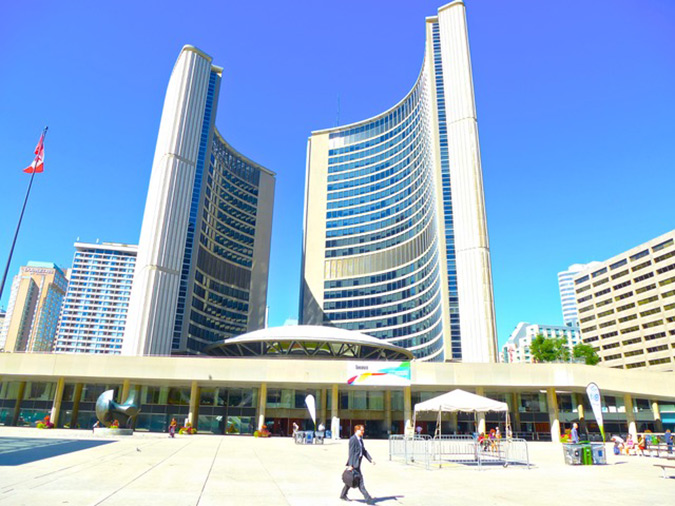 · Sheraton Centre Toronto Hotel (http://www.marriott.com/yyztc) — The Sheraton Centre Toronto is a perfectly located hotel on Queen Street West just across from Toronto City Hall. Many of its 1372 guest rooms and suites that ascend up 43 floors have spectacular views of Lake Ontario and the CN Tower. For people on business trips, families on vacation, or couples having a romantic weekend away, this hotel offers a variety of very special amenities. The Sheraton has the largest hotel gym in Toronto on the 3rd floor and a near Olympic-size indoor/outdoor swimming pool.

Toronto International Film Festival is the most fan-friendly film festival in the world. Add in sightseeing, touring, top tier restaurants, eateries and museums and Toronto becomes a destination vacation with a full plethora of choices any time of year. Come for TIFF. Stay for the city of Toronto.