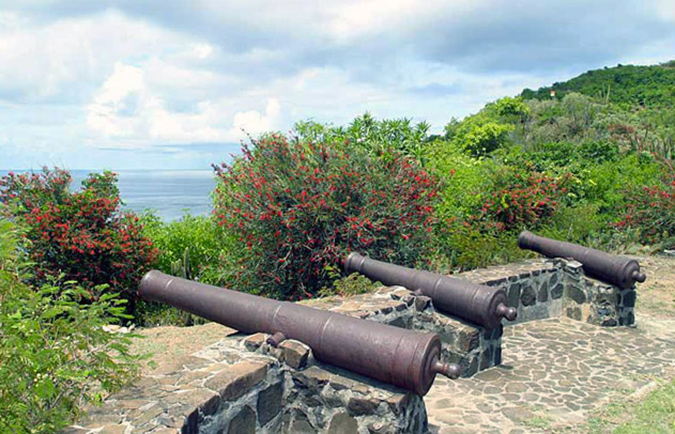 Canons on a fort in Bequia

Though sited by Columbus this island was not easily settled. The European conquerors brought fear and enslavement with them throught the Caribbean, but the Carib Indians nobly prevented European conquest of Hairouna, as the originally called St. Vincent, until well into the 1700s. During that time before the French gained control, African slaves escaped from Barbados, St. Lucia and Grenada found a way here for refuge and intermarried with the Caribs. They became known as Garifuna or Black Caribs.

In 1719, French settlers used the expertise and labor of African slaves to cultivate coffee, tobacco, indigo, corn, and sugar on plantations. The British and French always battled in volleyball like fashion for territories in the New World. So it was for St. Vincent, which in 1763 was ceded to Britain, then restored to French rule in 1779, then regained by the British under the Treaty of Paris in 1783, Great Britain officially recognized the end of the American Revolutionary War as part of the Treaties of Versailles of 1783.

From 1763 until independence, St. Vincent passed through various stages of colonial status under the British. A representative assembly was authorized in 1776. Ownership is one thing, effectively ruling the land is another. The Black Caribs on St. Vincent, led by Chief Joseph Chatoyer fought the British and continued until 1796, when the British conquered them and sent 5,000 Black Caribs in chains to Roatán, a prison island off the coast of Honduras.

Thus St. Vincent became one of the last slave plantation colonies in the Caribbean. Its specialty was Sugarcane cultivation. Once slavery in the Caribbean ended in the late 1800s and the British Crown Colony government was installed in 1877, wealthy plantation owners recruited Portuguese and East Indian laborers.

Though people of African descent acquired a number of rights earlier, universal adult suffrage granted in 1951. During this period, the British made several unsuccessful attempts to affiliate St. Vincent with other Windward Islands in order to govern the region through a unified administration. But the colonies had other ideas — Freedom from British rule. Then Britain made a futile last attempt at unification called the West Indies Federation, which collapsed in 1962. like many other colnies in the British Commonwealth, St. Vincent was granted associate statehood status in October 1969.

Following a referendum in 1979, under Milton Cato St. Vincent and the Grenadines became the last of the Windward Islands to gain independence on the 10th anniversary of its associate statehood status, October 1979.