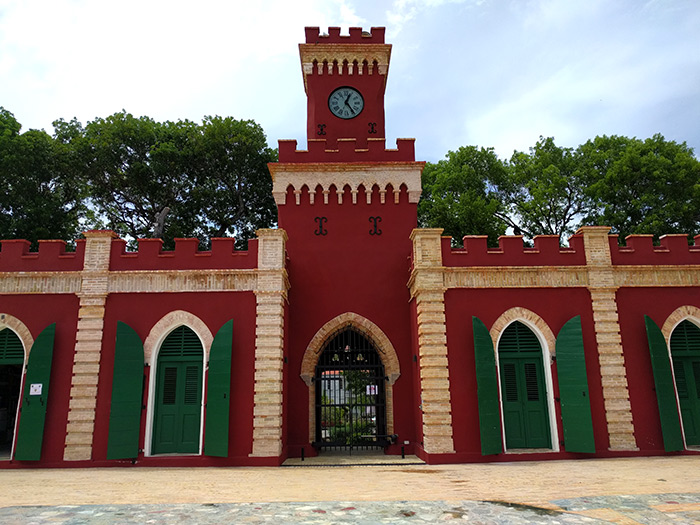 Drake’s Seat
The vantage point where Sir Francis Drake was supposed to have looked for enemy ships of the Spanish fleet, this lookout. One of the island’s best lookouts, Drake’s Seat offers a panoramic view of Magens Bay, St. John and Tortola to the east. Explorer Sir Francis Drake is said to have kept watch on his fleet from this vantage point, marked by a seat across the road from the parking area.

American Yacht Harbor
Features everything all the amenities you’d need or want for a comfortable stay in the in St. Thomas. The attraction is many captains charter day-trips here. Negotiate for the best value.

Seven Arches Museum
Once a Danish residence, it was built in the 19th century featuring seven arches to support the staircase. Today, it continues to be a residence as well as a museum filled with West Indian mahogany furniture and other antiques.

Mahogany Run Golf Course
A championship par-70, 18-hole, 6,000 yard golf course, designed by George and Tom Fazio on the north coast. The course has sweeping views of the island and ocean in the backdrop. The 14th hole of Mahogany Run perched 200 feet above a rocky inlet gives a commanding a view of neighboring St. John and Tortola. The course clubhouse is also a popular venue for dining events.
ADDRESS: Northside
PHONE: 340-777-6250
WEBSITE: http://www.mahoganyrungolf.com

Fort Christian
In 1672, Jorgen Iversen led an expedition from Denmark to St. Thomas. Once here, he led construction of Fort Christian, named after Danish King Christian V. By 1676, builders had completed the fort’s outer walls and placed a three-story oval tower in the courtyard against the north curtain. Trygborg, as the tower was named, had gun platforms on its two upper stories and roof. Considering a volatile history European colonial wars in the Caribbean, it saw several battles, until it was demilitarized in the 1870s. After the military departed, it served as police headquarters. In later years, Trygborg tower and much of the first was demolished. The present Gothic Revival-theme structure, with its three-tiered tower, was built between the northeast and northwest bastions to replace the demolished north curtain.

Blackbeard’s Castle
Once the 17th-century Fort Skytsborg, Blackbeards Castle was re-named for the pirate who frequently visited the island. This watchtower, originally named Skytsborg (Sky Tower) by the Danes, was built in 1679. According to legend, the pirate Edward Teach, nicknamed Blackbeard, used the tower to watch for ships entering the harbor of Charlotte Amalie. The tour costs $16.
WEBSITE: http://www.blackbeardscastle.com

Main Street
Located downtown Charlotte Amalie, it has over 300 hundred duty-free stores featuring great deals on perfumes, jewelry, cameras, tablecloths, souvenirs and island clothing. Dronningens Gade or Main Street is the major artery and famous street where many of the unique and glamorous shops. Shopping at Rolex and Del Sol are quite popular.

99 Steps
Residents of Charlotte Amalie have used these 99 steps (actually 103 steps) built by the Danes to conveniently climb up and down the steep hills since the 1700s. The bricks used to construct the steps were brought from Denmark as ballast in the holds of trading ships. Of course, one is rewarded with both exercise and fabulous views with each step climbed.