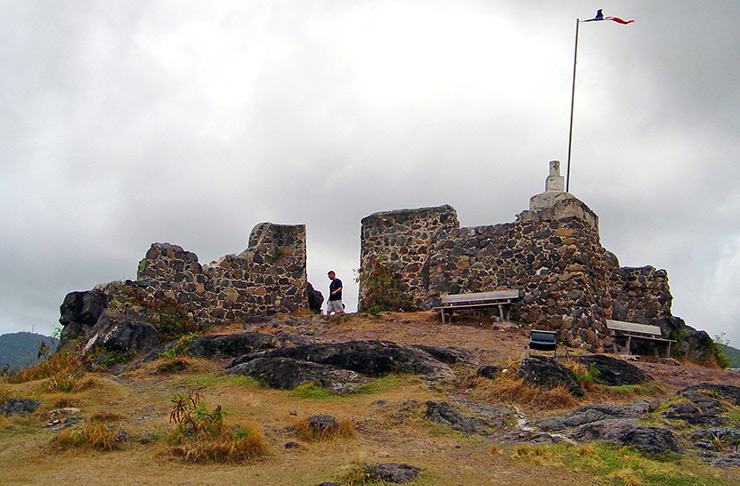 The island’s history started peacefully – traces of Stone Age people have been found on the island, dating back to 4,000 BC. Around 800 AD, the island was settled by Arawak Indians who arrived from South America who settled to a life of fishing, hunting and farming.

Throughout the history of mankind, people, towns, provinces, tribes, and nations have at best, traded for these resources and at worst fought and enslaved for these resources. Thus, the Arawaks were followed in the 14th century by a war-like, cannibalistic tribe of Carib Indians, who are the root of the name Caribbean. The Caribs called this island “Soualiga”, or “Salt Island” after its main mineral deposit. The remains of the Great Salt Pond can still be seen in Philipsburg, St. Maarten today.

Emerging from the Dark Ages with better communications, better weapon-making capacity and better ship-building methods than other continents of peoples, the European appetite for imperialistic control roared like at tiger in the New World. Since the arrival of Columbus under Spanish flag in 1492, European nations have coveted control over more resources from the New World to power their economies and increase material wealth to their nobility classes. Thus, the post-Columbus history of the Caribbean is filled with colonial imperialism and wars that caused islands to change hands between the Spanish, English, Dutch, and French.

Rather than tussle over smaller islands, the other imperialistic power named Portugal, settled for an interesting chunk of land with a northern boundary on the Atlantic Ocean. The Portuguese had no idea Brazil would eventually be the largest country and contain the most resources in South America.

Christopher Columbus sighted Soualiga on the 11th of November in the year 1493, the holy day of St. Martin of Tours. Hence, he named the island St. Martin, which the Dutch later modified to “St. Maarten.” Consequently, November 11th is celebrated to this day as St. Maarten-St. Martin’s Day. Failing to sight the Fountain of Youth, gold or silver that would satisfy the Spanish royals who comissioned them, Columbus and his Spanish fleet made no initial attempt to settle here, though he named and included the island on a map of Caribbean.

Later, the Dutch and French joined forces to repel the Spanish by 1644, when the Spanish finally abandoned their claims to the Eastern Caribbean. The back story is, Spain was making vastly more money from the massive slave-driven sugar plantations of Hispanola (Dominican Republic), Cuba and Puerto Rico. So why fight over smaller Eastern Caribbean islands having less economic value to them.

After driving out the Spanish who had higher priorities, the Dutch and French signed an accord in 1648 to divide the island. Over the next few years, the boundary was the subject of numerous disputes. When you add pirates and privateers to the turbulent mix, its easy to understand why so many St. Maarten-St. Martin and other Caribbean islands girded themselves with old stone forts and many soldiers for a modicum of protection.

Given imperialism is a never-ending contest for resources and influence, even in the realtively small island of St. Maarten-St. Martin, boundary disputes were not settled until 1817. In this timeframe the island changed hands between the two European powers 16 times. Hence, it acquired a the Jekyl & Hyde personality of names, buildings and traditions that are visible today.

Governors of the island then turned to better trade in 1939, when all import and export taxes were rescinded and the island became a free port. Princess Juliana International Airport opened in 1943, and in 1947 later the island’s first hotel, the Sea View, welcomed its first guests. Those were the seeds to St. Maarten becoming an international trading and tourism center by the 1950s. St. Martin finally began developing its tourism in the 1970s. Today, St. Martin and Martinique are communes of France administered from the Caribbean island of Guadeloupe. They all get to vote in French elections.