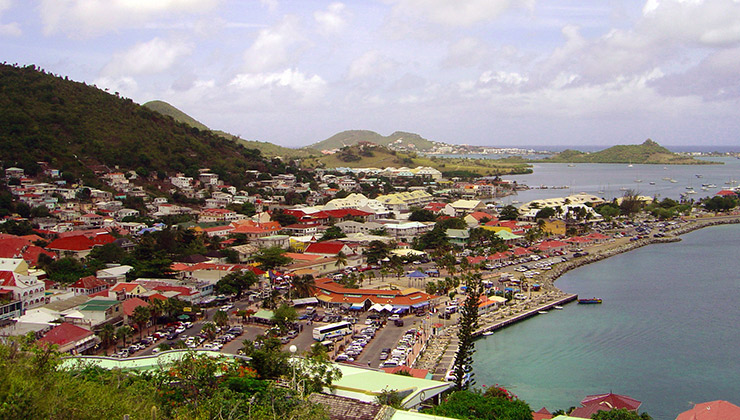 Marigot, the cosmopolitan capital of the French side, is home to all the local government departments. Here, boutiques and trendy restaurants sit side-by-side with traditional stalls. Don’t miss the colours, smells and buzz of the local market.
A former fishing village, Grand-Case has a unique Creole charm. Along its magnificent bay you will find a large number of restaurants in traditional huts and wattle houses.

Marigot
Ass capital of the French side, Marigot owes its name to the many swamps or marigots that used to occupy the zone. Marigot grew rapidly over the 18th century thanks to sugar cane production and became the capital of the French part. In 1970, the partial land-filling of a lagoon enabled the extension of the village. Another land filling project in 1990 facilitated the construction of the road along side the water front. Today, an inviting waterfront promenade an open-air market and shops under the tropical sun. Now the headquarters of of St. Martin and St. Barths, Marigot is home to all the local government departments of this French territory. Visitors will love discovering restored Creole houses, often next to luxury boutiques. One of Marigot’s main streets, Rue de la République boasts 19th-century traditional facades that have for the most part retained their architectural authenticity. The ground floors of these dwellings are of stone and lime mortar construction, while the first floors are wooden and built using traditional house construction methods. Facades face the street and have at least one upstairs gallery decorated with friezes..

Marigot Catholic Church
Built on the Fort Louis road, the church was constructed in 1941. Before then, Catholics found themselves in the minority and had no place of worship. That year, Father Wall took up office in St. Martin and initiated the construction of Marigot’s Church. He also masterminded the construction of Grand Case Church, which was built at roughly the same time using the same stone and lime technique. In 1971, the presbytery was added to the Marigot Church, other extensions followed the enhance this island landmark.

Marigot Market
Stalls manned by locals selling fruit and vegetables, spices, local meats and fresh fish caught that day are housed under huts along the water front. Artists and vendors lay out their wares Monday-Saturday allowing visitors to sample the full range of flavoured rums, fruits, spices, and shrub (orange peel crushed into rum). Opposite the traditional restaurants adjoining the local market, a magnificent stone statue commemorates black female market sellers. In 2006, as part of a series of events for black history week, a fresco again commemorating female market sellers was painted on a wall opposite the market. There’s a drink to suit every visitor.

Fort Louis
Overlooking Marigot Bay and with views across to Anguilla, Fort Louis was built in 1789 under the command of the governor of St. Martin and St. Barths on behalf of the French Crown. The primary purpose of the fort was to defend the warehouses at Marigot port, where produce such as salt, coffee, sugar cane and rum was stored. Subsequently abandoned, Fort Louis fell into ruins. The fort was restored in the 19th Century but abandoned a second time. During this period the fort also witnessed struggles between the French and the English, the latter landing on a regular basis from Anguilla to loot the warehouses.

Spring Sugar Mill
The mill takes its name from a spring that was located nearby. Sugar production was started at the factory in 1772 by traders from Guadeloupe. For a century, the factory produced a significant amount of sugar and rum. Remains of the sugar plant can still be seen, including the large round limestone chimney and the animal-driven mill where you can still catch a glimpse of the grindstones used to crush the sugar cane. Other remains are visible here, too, including the purgerie, the furnace, where there were four great boilers, a still oven and a tank.

Saint Jean Plantation
The ruins of the 1772 plantation of Saint Jean can be seen from the main road out of Marigot towards Philipsburg. In 1795, revolutionaries from Guadeloupe sequestered the sugar factory. The plantation continued until the French abolition of slavery in 1848, at which time the Saint James sugar plantation was sold off in small lots, while the Saint Jean plantation remained in its original state. Sugar production stopped in 1860 and the buildings fell into ruins. Among the ruins are a two-tier animal-powered mill, sugar mill and a purgerie/guildiverie where the sugar was refined.

Tijon Parfumerie
Located in Grand Case, St. Martin, the perfumery offers visitors products made in St. Martin, including fine perfumes and colognes known as “The Fragrances of the French Caribbean.” Also offered are sunscreens, lotions and cosmetics, all made in the on-site lab. Tijon’s scents and skin-care products combine fragrant oils distilled from locally cultivated exotic flowers such as jasmine, gardenia and frangipani and botanical extracts such as aloe vera, polypodium papaya and rosemary with the world’s finest perfume oils. The result is Tijon’s acclaimed collection of fragrances and exceptional anti-aging skin and sun care products.

Border Obelisk
After the Spanish abandoned the island in 1648, the Dutch and French families who had settled in the hills to grow cassava and tobacco asked their respective governments to take possession of the island. After brief skirmishes, the two nations signed a treaty in March 1648, dividing the island into two parts. Legend has it that the location of the border was determined after a race between two runners from each nation.

Philipsburg Courthouse
Used as a court by successive governors, The Courthouse, located on Front Street, Philipsburg’s main street, is one of the most famous monuments on the Dutch part of the island. Ravaged by hurricanes, the courthouse has been restored on each occasion. The Courthouse is owned by the Government of Sint Maarten and is featured on its list of major historic monuments.