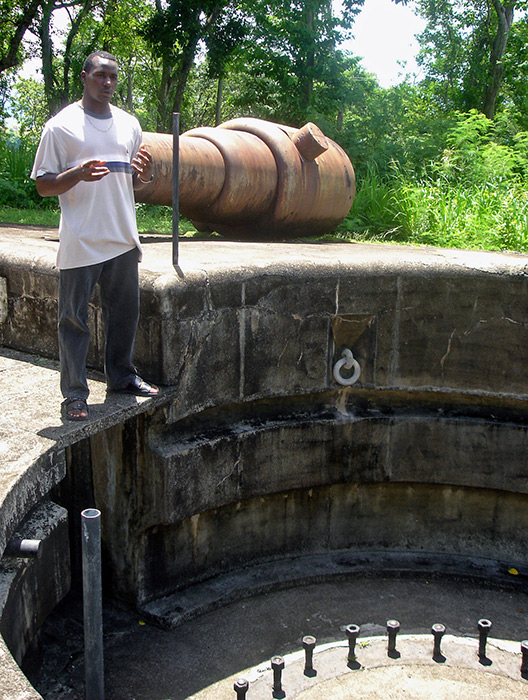 The Arawak Indians established in St. Lucia over 1000 years ago. Later, the Carib warrior Indians conquered the peace loving Arawaks around 800 AD. Carib tribes called the island “Ioüanalao” and “Hewanorra” meaning “there where the iguana is found”. Whoever gave the island its current name, St. Lucia, first used in the late 16th Century is murky.

The first European to land is also murky. One theory suggests that Juan de Cosa, a little known explorer, named the island. One of his maps shows a small island named El Falcon where St Lucia is located. The first European to settle here was a wooden-legged pirate named Francois Le Clerc who settled on Pigeon Island. From there he could conveniently pick off passing Spanish ships for their treasures.

The Dutch established a temporary base at Vieux Fort around 1600. Then, the English landed in 1605. Sixty-seven settlers purchased huts from the Caribs. One month later only 19 were left and these were forced to flee from the warrior Caribs in a canoe. A second futile attempt at colonization by the British was by Thomas Warner in 1639. Over time the Caribs succumbed mostly to deseases brought by the Europeans for which they had no immunity.

The French arrived in 1651 when two representatives of the French West India Company bought the island. Eight years later, ownership disputes between the French and the English ignited hostilities that should endure for 150 years. During this time, the island changed hands fourteen times. In 1746, the first town was established; Soufriere, a French settlement.

The English first attacked St. Lucia in 1778 after declaring war on France for aiding the Americans in the War of Independence. During this skirmish, known as the Battle of Cul de Sac, the English captured the island. They established a naval base at Gros Islet and fortified Pigeon Island. By 1780, twelve French towns had been founded and the French built the first sugar estates which multiplied in number. In 1780, a major hurricane destroyed many plantations, but with slave labour, the French quickly repaired the damage. In 1796, after Castries was razed by fire, the British attacked the French and foreced them to surrender to surrender. But the French recovered control of the land until Napoleon lost the Franco-British War, then they French ceded St. Lucia to the British in 1814.

More wars between the English and the French prevented the growth of large plantations and the sugar industry suffered heavily with the abolition of slavery in 1838 and mega-sugar-plantations of Hispanola and America who could sell their sugar cheaper per pound. In the same year, St. Lucia joined the Windward islands with its seat of government in Barbados. In 1842, English became the island’s official language.

In 1863, the first steamship laden with coal called at Castries and the port soon became a major coaling station. The first shipment of indentured Indian (from the country of India) laborers arrived in 1882 to help bail out the agricultural industry. They continued to arrive over the next 30 years. Many settled here.

The coal industry began to decline in 1906 when the island was abandoned as a garrisoned naval station. World War I and the Depression Era contributed to its demise.

Despite tough times over the years, St. Lucia moved towards independence in 1951 when suffrage was granted to all citizens over age twenty-one. The Windward Islands adopted a new constitution and the seat of government moved to Grenada. In 1958, St. Lucia joined the West Indian Federation, which collapsed after only four years.

In 1960, the island enacted a new constitution with the appointment of the first Ministers of Government. This constitution expired in 1967 when England granted the island full self-government. St. Lucia became completely independent from England on February 22 1979. The island has since turned to tourism as its major industry.