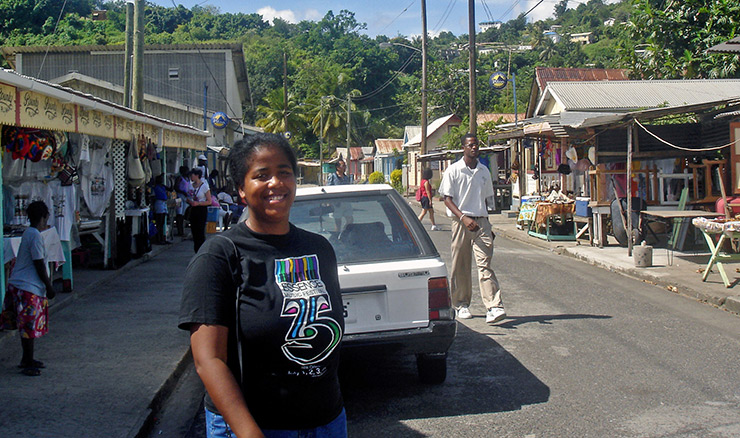 Castries
The capital city with a harbor that occupies the crater of an extinct volcano. Charter ships and large cruise ships port here. Unfortunately, several devastating fires destroyed buildings older than 1948. Though it has no classic architecture to celebrate, Castries public market is a great place for people-watching every day, except Sunday. The luscious fruits and vegetables of St. Lucia may be new to you. The array of colors alone is astonishing. Sample one of the numerous varieties of bananas. On St. Lucia, they’re allowed to ripen on the tree and taste much better than bananas picked green for sell in American supermarkets. Market stalls feature women that dress with cotton headdresses to display their marital status.

Soufrière
Is a fishing port set between two famous pointed hills called Petit Piton (2,421 feet) and Gros Piton (2,283 feet) that look like volcanic cones rising from lava, but covered in dense green vegetation. Their sheer rise from the sea makes them a landmark for miles around. Coupled with waves crashing at their bases, the scene is fit for National Geographic TV special. Despite their inviting beauty, don’t attempt to climb either mountain without a knowledgeable guide. Near Soufrière lies Mount Soufrière, a craterous landscape of bubbling mud and sulfur. You can drive a car along a winding road into a volcanic crater. Walk along a trail peppered as park rangers overlook from observation platforms. Gabriel’s Pool is named in honor of a St. Lucian tour guide, Gabriel, whose weight collapsed the surface of mud close to the hot springs. Now visitors are prohibited from getting too close to the pools.
DAYS & HOURS: 9a-5p
PHONE: 758-459-7200
WEBSITE: http://www.soufrierefoundation.org 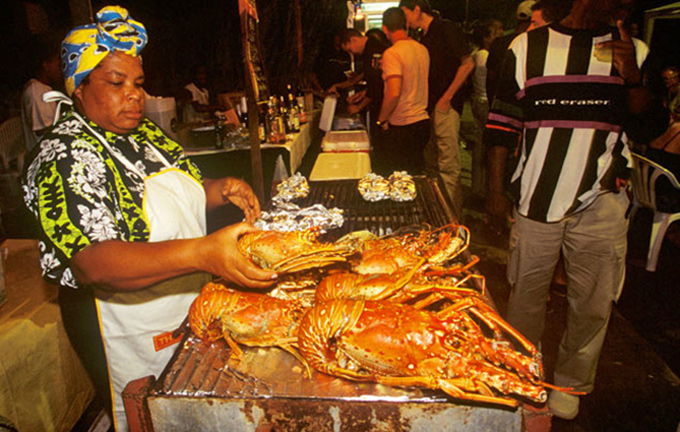 Anse La Raye Village
Its the largest town in Anse la Raye Quarter, located on the island’s western side near Marigot Bay. Indicative of the nation’s colonial history, Anse La Raye has several examples of French and English colonial architecture. The name is derived from the rays found in the bay with an English translation means Bay of Rays. Two rivers flow into the bay, the Grande Rivière de l’Anse la Raye and the Petite Rivière de l’Anse la Raye. Here’s you’ll find Afrocentric gifts and sauces among the trapping. On Friday nights, there’s a fish fry on Front Street, which is parallel to the beach. Local men showcase their fishing skills and chefs prepare lobsters, fish and conch to be appreciably eaten by locals and tourists alike.

Pigeon Island National Historic Park
Only 44 acres, Pigeon Island is St. Lucia’s first national park. Its joined to the mainland by a causeway. On its west coast are two popular white-sand beaches. There’s also a restaurant, Jambe de Bois, named after a wooden-legged pirate who once used the island as a hideout. An Interpretation Centre equipped with local history artifacts and a multimedia display ranging from the Amerindian occupation of 1000 AD to the British Battles in 1800s. Now Pigeon Island isthe site of a hotel and interconnected to the St. Lucian mainland with a causeway, the island offers pleasant panoramas and nature walks.

Derek Walcott Square
A rectangular park with a public library and the island’s iconic Catholic Cathedral. The park is named after Derek Walcott, born in St. Lucia in 1930, who won a Nobel Prize for literature. Plaques within the park honor Walcott with a verse from his epic poem, St. Lucie. A few steps away is a plaque commemorating another island-born luminary, Sir William Arthur Lewis (1915-79), winner of a Nobel Prize for economics, whose face appears on some of the nation’s currency. The French-built Cathedral, immediately to the edge of the park. Built during the 19th century of wrought iron, cast iron, and stone under the supervision of several generations of hard-working priests, it’s covered with an almost surreal mélange of French Catholic and West Indian iconography. A wall of frescoes commemorates the “Martyrs of Uganda” who were slaughtered by Idi Amin.

Diamond Mineral Baths
Located in the lush Diamond Botanical Gardens with a paradise-like waterfall created from water bubbling up 106°F water from sulfur springs, the waterfall changes from yellow to black to green to gray several times a day. The baths were constructed in 1784 on the orders of French King Louis XVI, whose doctors told him these waters were similar in mineral content to the waters at Aix-les-Bains in France. The thinking was that waters provided recuperative effects for French soldiers fighting in the West Indies. For a small fee you can bathe there as well.
DAYS & HOURS: daily 10a-5p
PHONE: 758-452-4759
WEBSITE: http://www.diamondstlucia.com

Grande Anse
A nature reserve with arid terrain is arid terrain only suitable for experienced adventure travelers, Grande Anse is home to rare bird species and the fer-de-lance, the only poisonous snake on the island. Its beaches — Grande Anse, Petite Anse, and Anse Louvet — are nesting grounds for the hawksbill, green turtle, leatherback, and loggerhead endangered sea turtles. Nesting season lasts from February to October. Hire a jeep driver over bumpy roads in this reserve.

Nature Reserves
Fregate Islands are a cluster of volcanic rocks a short distance offshore from Praslin Bay, midway up St. Lucia’s eastern coastline; the islands were named after the scissor-tailed frigate birds that breed here. The best way to respect this fragile ecosystem is to walk along the park’s nature trail to observe revines, sea caves, a waterfall, and mangrove swamp.