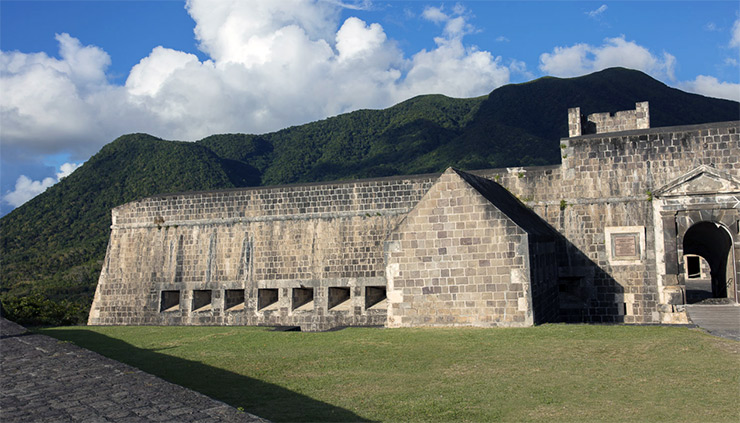 The first inhabitants of St. Kitts were pre-ceramic Indians called Sibonay, who were beleived to have arrived here around 2,100 years ago from Central America. They left evidence of primitive tools made of stone and shells and petroglyphs on large rocks. St. Kitts is a volcanic island, which explains its dramatic mountain peaks and lush tropical vegetation. When Carib Indians arrived inhabitants they called the island “Liamuiga” or “fertile land,” a reference to the island’s rich and productive volcanic soil. Today that name graces St. Kitts’ central peak, Mount Liamuiga, a 3,792-foot extinct volcano.

The European history of St. Kitts begins with the second voyage of Christopher Columbus along the chain of Caribbean islands in 1493. He sailed past the island but did not land. Some claim he named the island St. Christopher after himself, but that point is in dispute. Various other explorers arrived at the island but none settled.

When Thomas Warner arrived with other settlers in 1624 to found the first British colony in the Caribbean, the island was known as St. Christopher’s. Warner chose St. Christopher for its abundant forests, fresh water, fertile soil, and salt to preserve fish and meat. During that occupation, the British abbreviated the name to St. Kitts. The French arrived a year later, led by Pierre Belain d’Esnambue after fleeing a Spanish war ship. The British and French (and their diseases) wiped out the warrior Carib Indians at aptly named Bloody Point on St. Kitts’ west coast in 1626. Two years later, the British settled on Nevis, just a few miles to the south and visible from St. Kitts.

A significantly larger island than Nevis, St. Kitts could support larger scale sugar plantations. With less shipping cost between the Caribbean and slave labor from West Africa, St. Kitts generated exceptional wealth as sugar colony. Commerce advantages always generated ongoing competition between the French and British for intermittent control of both islands over the next 100 years and many famous battles ensued. Then the Treaty of Versailles in 1783 returned St. Kitts to the English permanently. In case you think everything was peaceful, note that pirates and privateers hijacked merchant vessels passing through the area well into the 19th Century.

In 1880, the British put St. Kitts and Nevis under one colonial government and often made groupings that did not make sense to islanders. One such problematic grouping was that of St. Kitts and Anguilla. Anguilla had been administered by St. Kitts since 1824, despite numerous requests to governed directly by the British. Anguilla’s calls went unheeded and tensions mounted between Anguilla and St. Kitts until 1967. They disarmed and sent all the St. Kitts policemen stationed in Anguilla back home to St. Kitts. The British government found Anguilla’s request to return to colonial status highly odd and going completely against the grain of freedom from colonialism. so the British crown paid Anguilla a visit in 1969 in the form of 400 soldiers to settle things down. Just proves politics in this part of the Caribbean aren’t always what they seem or what we think they should be.

In 1983, St. Kitts and Nevis gained independence from Britain. But the twin island Federation remains a member of The Commonwealth and preserves the British traditions of cricket, driving on the left and colonial architecture in the capital of Basseterre.