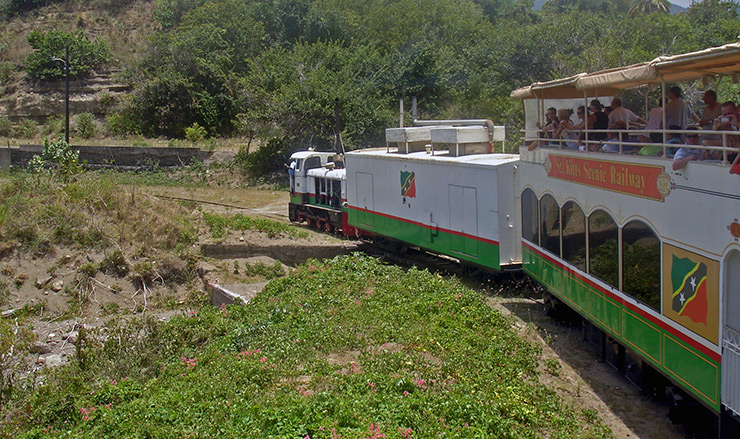 St. Kitts Scenic Railway
As the cheerfully-painted trains scurries around the coast, a Kittitian choir in traditional dress serenades passengers. Running for 18 miles, this narrow gauge track was originally built in 1926 to transport sugar cane. Now it’s provides a memorable 2-hour ride around the north coast, complete with guided commentary, drinks and surprise — sugar cakes! Departing from Needsmust Station, the train travels around the north coast to La Vallée Station in Newton Ground. From there a 45-minute bus ride completes the island circle.

The Amazing Grace Experience
If you love Gospel music, you must visit this site. Located in Sandy Point, this attraction explains the link between St. Kitts and the Amazing Grace hymn composed by former slave-trader John Newton on his journey to redemption. In 1754, the foul-mouthed, English slave trader on a visit to St. Kitts, fell into conversation with a captain of a Scottish ship, Alexander Clunie, who converted him to Christianity. When he returned home, Newton joined the clergy and composed hymns, most notably Amazing Grace.

Warner Park Stadium
Though renovated, this eighty year old venue is named after the first English Governor in the Caribbean, Sir Thomas Warner. At St. Kitts Music Festival the lights are flashing, the band is on fire, everyone is singing along and it’s a hot, hot night. Held each June in Basseterre, the festival has been running for over 20 years. It’s now one of the biggest parties in the Caribbean. John Legend, Kool & the Gang, Roberta Flack, Shaggy and more have played at the festival. If you can time your vacation here, June is best.

Island Weddings & Honeymoons
Red tape for Marriage is kept to a minimum on St. Kitts. There’s no residency requirement and local wedding planners make everything run smoothly. Many couples automatically think ‘beach’ on the immaculate sands of the St. Kitts Marriott Resort in North Frigate Bay, but there are plenty of options. Some choose luxury villas and tie the knot aboard a catamaran for intimate ceremonies. Photogenic locations include the lofty Brimstone Hill Fortress, the exclusive Palms Court Gardens and Romney Manor. For luxury and privacy, hide away in the hills at Belle Mont Farm, where most rooms have a private plunge pool and al fresco bath. Couples often saddle for horseback rides to a rum tasting in the hills. At night, try the craft cocktails served on the deck at Salt Plage in Christophe Harbour.

Ziplining
“De Boss,” the longest of Sky Safari’s 5 zippiness is strung through the rainforest canopy at Wingfield Estate, and its a screamer. You can safely whiz along 250 feet up above green canopy with jaw-dropping views. They give you a helmet, training and safety briefing first, so by the time you reach the intense finale – the River Rocker’ you might be doing 45 mph to awesome.

Brimstone Hill Fortress National Park
Huge stone battlements, a line of rusty cannons pointing out to sea, ghostly barracks and a historic cemetery make it easy to understand why it was designated an UNESCO World Heritage Site in 1999. Once home to 1,000+ soldiers and their families, this citadel is one of the Caribbean’s most remarkable historical forts. When you explore the museum inside, there’s a good audio guide to help you appreciate the site.

The City Circus
Featuring majestic old style architecture, this central taxi stand area at the heart of Basseterre is a spot where both tourists and locals alike congregate. The Circus is a perfect location from which to observe the hustle and bustle of St. Kitts’ capital city, which was the first French capital in the Western Hemisphere. Basseterre’s many historic buildings reflect a mixture of French and British architectural influences, a result of the settlement of the island by these two former colonial superpowers. The Circus is modeled after the British Piccadilly Circus in London and its centerpiece is the Berkeley Memorial Clock. Also located nearby is Independence Square, a garden type memorial and a historic site of a former colonial slave market.

Explore The Rainforest
A trekkers delight, leave in the morning for a steep climb up Mount Liamuiga. At 3,972 feet above sea level, its the crowning glory of St Kitts. This six-mile round trip from Newton Ground is best done with a local guide who is entertaining and informative as you climb up through the massive rainforest. The higher you go, the cooler it gets. The dormant volcano peak is a tough hike, but once you’re staring down into the rim of half-mile-wide verdant crater known as “The Giant’s Salad Bowl”, you will thank yourself many times for the rest of your life. More than Mount Liamuiga, all land above 1,000 feet is protected. Everywhere you look there are vibrant flowers and fruit trees, including red and yellow heliconias, breadfruits, towering royal palms and the scarlet-petalled poinciana, the national flower of St. Kitts. Greg’s Safaris offers educational track adventures on foot and by 4×4 vehicle. Birdwatchers should head to Romney Manor in Old Road to spy forest birds, while Half Moon Bay on the Atlantic coast is a good spot for viewing pond and sea birds.

Spectrum ATV Tours
It runs off-road group trips by all-terrain vehicle, a 2-hour drive through the sugar fields and old plantations. The minimum age is 16 for riders.

Trinity Inn Stables
Located in Palmetto Point has For horseback riding trips along the beach and into the rainforest.