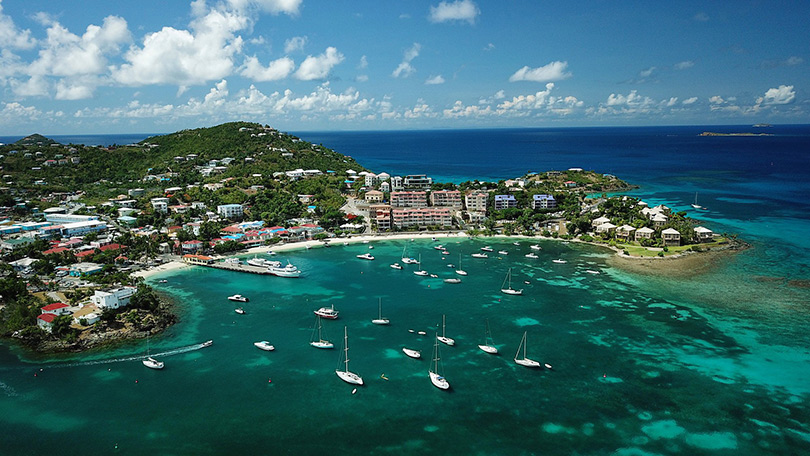 Mongoose Junction
The premier dining and shopping district on the island, its located near Cruz Bay. It has over 16 shops, 5 galleries, 6 eateries and the office of Arawak Expeditions (340-693-8312) for tours of the island. If you stay overnight on St. John, your appetite will eventually lead here.
WEBSITE: https://www.mongoosejunctionstjohn.com

Annaberg Sugar Plantation Ruins
This Danish Colonial plantation was in built in 1721. It became one of the island’s largest sugar, rum and molasses producers in the Virgin Islands by the 1800s. Today, it’s ruins are a museum covering plantation life and sugar production. You can tour the old slave quarters, factor, and windmill on a marked historical walking trail. Spectacular views of the sea and other islands are visible from the plantation, which is located on the northeast side of the island, near Leinster Bay. National Park staff are usually on hand to provide more context. After touring the ruins, consider a hike on the Leinster Bay trail, one of the most scenic on the island.
ADMISSION: small fee
ADDRESS: Leinster Bay Road, St. John
PHONE: 999-999-9999

Wet Woody’s
This private boat charter company affiliated with Woody’s Seafood Saloon in Cruz Bay, offers half-day, full-day and multi-day captained charters to the hidden coves and bays of St. John and the nearby British Virgin Islands. All charters include a bottle of Wet Woody’s 30 spf sunscreen, ice and drinking water, a sampling of beverages from St. John Brewers, a captain and first mate, and a complimentary drink at Woody’s Seafood Saloon after the charter. Wet Woody’s promotes green tourism by purchasing carbon offsets, using reef-friendly sunscreen, and reducing the amount of plastics they use on board.
ADDRESS: Cruz Bay, St. John
PHONE: +1 340-776-3636
WEBSITE: http://www.wetwoodysvi.com

Reef Bay Trail
This popular hike can be undertaken on your own (with the help of a park service map), or you can join a guided tour led by a park service ranger. Trail distance is 2.5 miles each way, mostly shaded and rocky. Sturdy shoes are required. The trail starts at the highest point on the island and winds downward toward toward Reef Bay in about two hours. A slight detour takes you to the ancient petroglyph site, with ancient rock carvings. The remains of a sugar plantation can be found at the end of the trail, as well as the lovely Reef Bay beach, which offers good snorkeling. If you opt for the ranger-led tour, a guide will identify the trees, plants and animals along the way, and give a history of the Reef Bay Plantation. The guided trip also features a boat ride back to Cruz Bay. Self-guided hikers are on their own as far as getting home. If you get tired of trekking all the way back to the top, or take a trail to Lameshur Bay, where you can call a taxi. To reserve a spot on the guided hike, call well in advance, as spots fill up quickly. The cost is $30 per person, and the meeting point is in front of the National Park Visitor Center in Cruz Bay.
ADDRESS: Route 10, St. John
PHONE: +1 340-776-6201
DAYS & HOURS: Jan-Mar Mon-Tue, Thu-Fri 9:30a, Apr-Jul Mon-Tue, Thu 9:30a, Aug-Oct Mon, Thu 9:30a, Nov-Dec Mon-Tue & Thu 9:30a,
Hours Vary Seasonally

Coral Bay – 1733 Slave Uprising Site
In their homeland, many of the Akwamu (present-day Ghana) people had been nobles, wealthy merchants or other powerful members of their society. They developed plans to take control of St. John and rule it. From 23 November 1733 to 25 August 1734, while the island was under Danish rule, the chiefs led 150 African slaves from Akwamu to revolt against the owners & managers of the island’s plantations. It was one of the earliest and longest slave revolts in the Americas. The Akwamu slaves captured the fort in Coral Bay, then took control of most of the island. They intended to resume crop production under their own control. The Danes called on fellow colonists to send several hundred well-armed French and Swiss troops from Martinique, a French colony. After plantation owners regained control, colony militia hunted down that last Akwamu maroons offering resistance. There slave uprising gave hope to many others for over a hundred years.

Sprauve Library & Museum
Constructed in 1757 as a plantation great house, it fell into disrepair before being restored to its former glory in 1980. In addition to book loans, periodicals, video rentals and research facilities, the library offers an extensive reference collection focused on the Caribbean. On the lower level, a small museum features displays on the history and culture of St. John, including Indian pottery and colonial artifacts. The library also hosts book discussion groups, Spanish language classes, children’s story hours and occasional craft demonstrations. On a quiet day, its a great place to escape the heat and learn a little about island life.
DAYS & HOURS: Mon-Fri 9a-5p
ADDRESS: Enighed Estate, St. John
PHONE: +1 340-776-6359