Domestic flights are provided by 7 airlines, with seats ranging from business class to budget-friendly. You will also be pleased to discover that international airports Johannesburg, Pretoria, Cape Town and Durban received large amenity upgrades for 2010 World Cup. Nevertheless, check the luggage policy for your airline and confirm your flight 24 hours in advance. Make a copy of your passport/flight itinerary/hotel reservations and leave it with someone at home. Pack headache and other medicines in your hand luggage.

South African Airways (SAA) is the largest air carrier in Africa, with connections to more than 28 cities across the continent. SAA serves Johannesburg, Cape Town and Durban. As a Star Alliance member, SAA also offers customers access to 1,356 destinations in 193 countries and 21,500 flights daily. Other local airlines include Airlink and South African Express; British Airways (operated by Comair); and the low-cost airlines of Mango, 1Time and Kulula.com. Each makes convenient South Africa travel add-ons.

For domestic flights, check in at least 1 hour before take off. Standard airport security measures are in place at all airports and regular airline security protocol applies. Budget domestic tickets begin at around R500 return, while premium class domestic tickets start at around R1000 per person return.

Taxis and shuttle buses await you at the Arrivals roadway. Uber serves Johannesburg & Pretoria, Cape Town, and Durban. Check ahead for each airport’s Uber pick-up location. 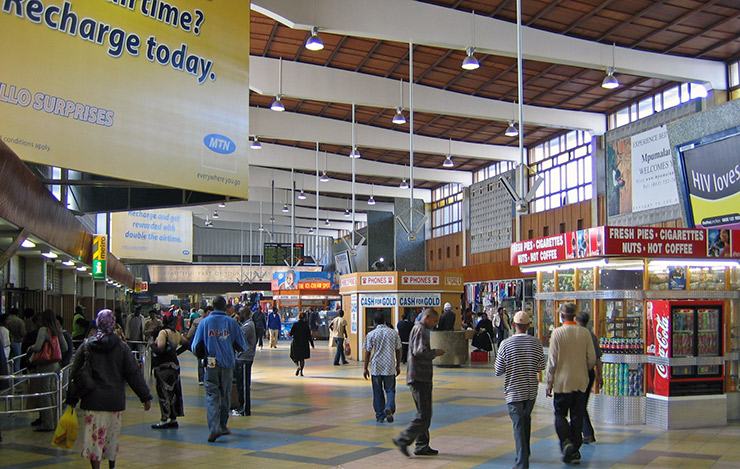 South Africa train travel includes numerous rail operators and covers some of the most beautiful parts of the country between Johannesburg, Pretoria, Cape Town, Durban and Port Elizabeth. In some parts of routes, its like watching a safari from your moving window.

South African rail travel includes Spoornet’s Shosholoza Meyl, a passenger train that runs between all major cities. An economy class ticket will buy you a reclining seat with sufficient legroom on routes that include 11 major cities across the country. An upgraded ticket will get you either a 2-bed coupe or 4-bed compartment, which double as suites during the day and bedrooms at night. Communal showers and toilets are offered. This option is available on routes between Johannesburg, Cape Town, Port Elizabeth, Durban, Bloemfontein and East London.

Book a 2-bed coupe or 4-bed compartment on the passenger train, the Shosholoza Meyl, or a luxury compartment with private bathroom on its sister line, the Premier Classe.

For an ultra-luxurious ride, secure a compartment on the renowned Blue Train, with its opulent décor and exquisite cuisine. Marble tiles, gold fittings, in-suite digital entertainment centres and top-class local cuisine and wines complete the opulent Blue Train experience between Pretoria and Cape Town, and Pretoria and Durban. Spoornet also operates the Premier Classe, a luxury passenger line that accommodates 126 guests in spacious 2-, 3- or 4-bed compartments, complete with well-appointed bathrooms. Little extras like gowns and toiletries are provided, and room service is available. The Premier Classe line operates between Johannesburg and Durban, Johannesburg and Cape Town, and Cape Town and Port Elizabeth.

Like Metro systems worldwide, prevent being targeted by pickpockets as a vulnerable tourist. If traveling alone, avoid reading paper maps or tourist books on the Underground. Instead, study the map on your computer/tablet in your hotel room or at a cafe. If you have questions about the Metro, ask the concierge or English-speaking waiting and tip them. Then fold and stash away paper maps. After catching the Metro, a brief glance at maps in stations and on trains will not draw undue attention.

South African luxury buses are comfortable and feature normal coach creature comforts while viewing the country. Some have sleeper chairs to make your ride more pleasant. Tourism buses in South Africa are predominantly operated by Greyhound, Autopax and Intercape. South African bus travel can also include trips to neighboring African countries, as many local service providers operate routes across Southern Africa. Autopax is such an operator, featuring the brands Translux and City-to-City, which cover more than 100 domestic destinations and a number of African routes.

The luxury Sleepliner service boasts imported coaches with the only specially designed sleeper chairs in the country. Coaches are air-conditioned, have audio and visual entertainment, onboard toilets and are serviced by cabin attendants.

Minibus taxis pick up and drop off passengers in areas not serviced by the country’s bus and rail networks. Routes are determined by the drivers and there are no specific scheduled stops – taxis simply stop wherever a passenger needs one. Hailing these taxis is also a matter of knowing your sign language, for each route and destination has its own specific sign which passengers use to flag down drivers. The vehicles are often not maintained properly and therefore unroadworthy, and drivers have the tendency to drive recklessly.

Taxi services are restricted to metered taxis that have to be called. Ask your hotel to assist. South African taxis also include minibus taxis, but these vehicles are often unroadworthy. Only take a short minibus ride with an experienced guide or local. Metered taxis or Uber are your best bet.

South Africa driving is on the opposite side of that in America. The national speed limit is 120 kmh (75 mph) on national freeways. Most American-style freeways are limited to Johannesburg, Cape Town, Durban and Port Elizabeth metro areas. In South Africa, outside metro areas, freeway speeds may often slow to 40 mph. Drivers in the rightmost lane of freeways must move to the left, if a faster vehicle approaches from behind to overtake.

For safety, stick to the 1000 miles of 4-lane freeway (2 lanes on each side). If you plan to drive outside the large metro areas and don’t know where 4-lane freeways drop to 2-lane, leave the driving to experienced tour bus operators.