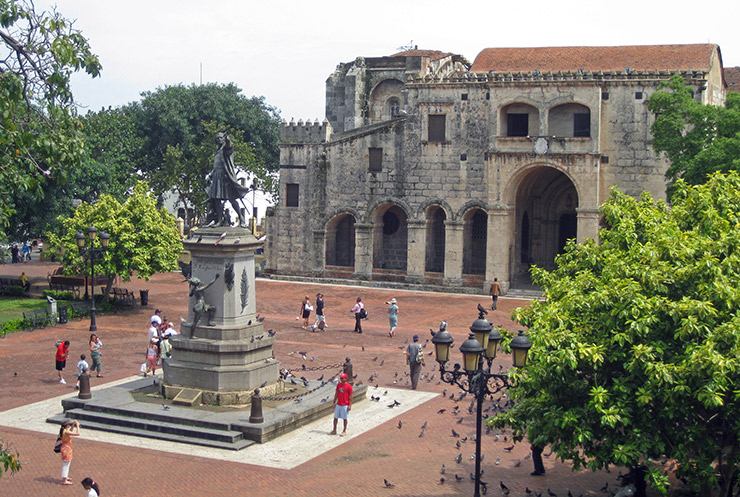 Columbus and crew of Spaniards grew fond of Hispaniola, as he describing the island in romantic terms in his Captain’s journal. Columbus’ admiration for Hispaniola coupled with his crew’s discovery of gold deposits in the island’s rivers led to the establishment of European settlements. Throughout history, a gold strike changes power relationships between different groups of people. So European settlers quickly arrived to found La Isabela in 1493 and used their guns to put Taino Indians into slavery mining it.

The island of Hispaniola is home to two nations, Dominican Republic on one side and Haiti on the other. Italian navigator Christopher Columbus claimed the island for Spain in 1492. But, it was his brother Bartholomew Columbus, who built the City of Santo Domingo in 1496.

Disease and torture imported by the Europeans eventully wiped out the poor Tainos. As the colony grew, some business-minded Europeans established cash crop plantations to feed markets in Europe. In need of new laborers to replace the Taino Indians, Europeans imported African slaves to work their plantations.

Christopher Columbus’ brother, Bartholomew Columbus, was appointed governor of Hispaniola and in 1496. He founded Santo Domingo as the capital and held a representative seat of the Spanish royal court for the Caribbean. Nothing beats currying to royal egos to gain power and influence for a city under your dominion.

Spain made Santo Domingo its first seat of colonial rule in what was called the “New World” by Europeans. Santo Domingo is technically the oldest city in the Americas. By the way, one of Bartholomew’s homes is still standing. It’s currently the Pat’e Palo Restaurant — the first tavern of America, established in 1505. A few original furnishings and artifacts are on display.

By 1515, the easy to locate gold deposits of Hispaniola were significantly exhausted. Then Cortez discovered silver deposits in Mexico. Upon hearing of the next lucky strike, most Spanish residents of Santo Domingo left for Mexico, leaving only a few thousand settlers behind. Because of the predominance of livestock, initially introduced by Columbus, these settlers sustained themselves by providing food and leather to Spanish ships passing Hispaniola.

In the late 1600s, France took control of the western half of Hispaniola. Thousands of Africans were soon brought to work the land of what was renamed Haiti. France’s control of Hispaniola, however, was short-lived. African military general Toussaint L’Ouverture, who was one time enslaved, led large groups of other enslaved Blacks in a war against the French and captured control of Haiti, Santo Domingo and most of the island. For decades following L’Ouverture’s liberation of the Africans, Haiti fought against Santo Domingo over territory.

The United States took first governing control of the island during construction of the Panama Canel. Today Dominican Republic, a country of 5-million people, is a safe global business and tourist destination that will have you echoing one local saying, “we have it all, what took you so long to visit.” 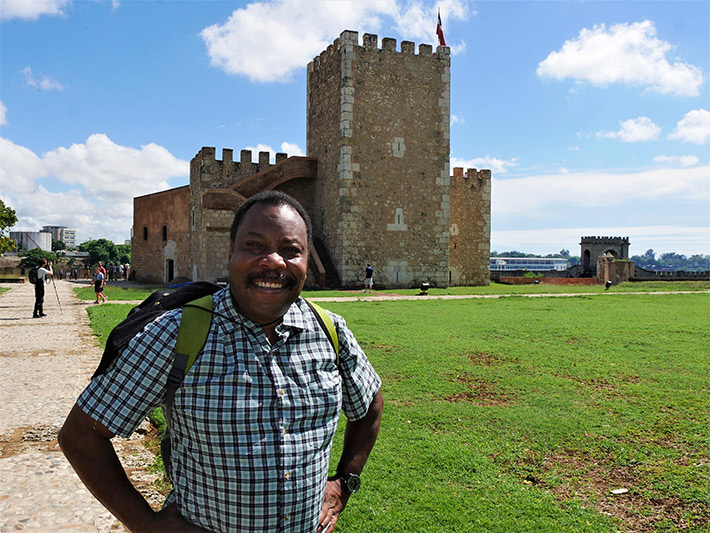 Hispaniola remained under Spanish control until 1697, when the western third of the island became the French territory. This area, which the French called “Saint Domingue” became home to large sugar plantations worked by several hundred thousand African slaves who also brought crop cultivation techniques with them.

In 1791, a slave revolt broke out in Saint Domingue. For fear of losing their colony to the slaves, the French abolished slavery in 1794. With calm in Saint Domingue, the French focused their soldiers on overwhelming the Spanish on western Hispaniola. In 1804, that western part of the island became the French-owned Republic of Haiti. Eastern Hispaniola next fell into contention between Spaniards and French.

In 1809, the eastern side of the island returned to Spanish rule. In 1821, the Spanish settlers declared an independent state, but weeks later, Haitian forces invaded the eastern portion of the island and incorporated Santo Domingo. For the next 22 years the entire island came under Haitian control. However, fueled by their loss of political and economic control, the former Spanish ruling class developed an underground resistance called “La Trinitaria.” After several attacks by La Trinitaria on the Haitian army, the Haitians retreated.

On February 27, 1844, the eastern side of the island declared independence and gave their land the name “Dominican Republic.”

The 70 years that followed were characterized by political unrest and civil war and government power struggles by Dominican strongmen. Disputes continued with Haiti and power returned to the Spanish for a short period of time. Turmoil in the early 1900s led the United States to intervene. In 1916, U.S. troops occupied the country and stayed until 1924 when a democratically elected Dominican government was put into place. However, the head of the army during the American occupation, Raphael Leonidas Trujilo, was a crooked repressive dictator. With America’s withdrawal, Trujilo rule lasted until 1961 until his motorcade was ambushed. The anniversary of his death is a public holiday in the Dominican Republic.

The Dominican Republic went through another series of leaders until 1965, when President Lyndon B. Johnson ordered U.S. troops to occupy the country again. Johnson intervened due to Cold War politics to prevent the Russians from gaining influence over another Caribbean island like Cuba. Thus, a rigged election in 1966 put Dr. Joaquin Balaguer, a member of the Partido Reformista Social Cristiano (PRD), in power for a reign that lasted until 1978.

Dominicans elected more members of the PRD, albeit with legitimate eleactions until 1996, when the other party was finally elected. In summary, the Dominican Republic endured zig-zag travels to free Democratic elections like most of the Caribbean today.