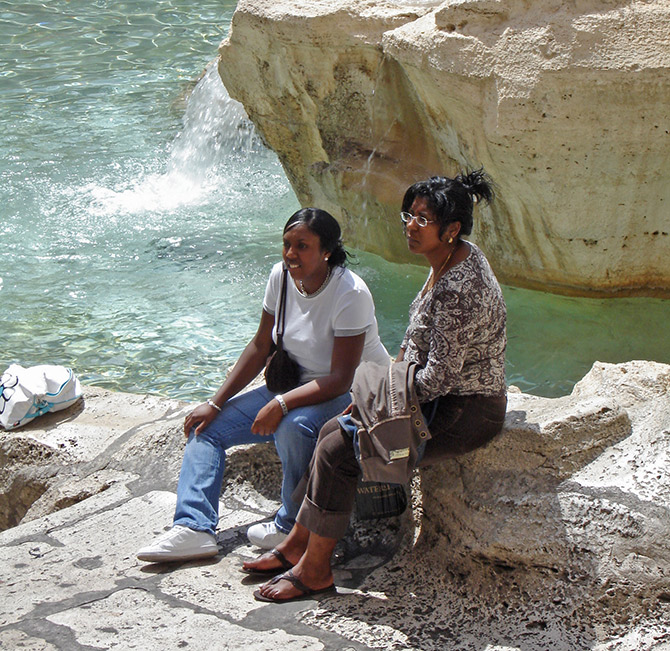 Rome Attractions in the Eternal City are vast. Yet, the fusion of centuries preceding Christ, the uniquely Italian yet international ambiance, outstanding cuisine, expressive denizens and wealth of historically significant tourist attractions are enough to turn any visitor into a big city enthusiast.

Spanning 150 square miles with a population of four million people, Rome exists in a series of interconnecting districts and neighborhoods layered with everything you can imagine from medieval bell towers to imperial temples, stunning architectural monuments, meticulously created statuary, historic churches, beautiful fountains, ancient ruins, ensconced catacombs and baroque basilicas, all interwoven with quintessential modern society which includes unbelievable shopping, delicious restaurants encompassing every cuisine imaginable, a nightlife scene unlike any other, incredible museums, and so much more.

Rome’s beginnings, depending on which historical account you adopt, are said to rest between 500 and 750 BC. Given the romans’ brutal domination of and tribute demands from the known world for centuries, it is not surprising to see the wealth of historic remnants of eras and events — Etruscan rulership, the rise of Christianity, Barbarian invasions, formation of the Holy Roman Empire, the French Revolution, Mussolini’s rule during World War II. All those eras leave a legacy through modern times.

The best way to get around the city is to buy a multi-day transit pass, which gives you unlimited use of Metro trains and buses that extend to every corner of Rome. There are many ways to explore Rome. An overview of the city can be achieved by walking tour for detailed exploration of a district or hop-on-and-off double decker tourbuses. You can always catch tourbuses at Termini Train Station to various locales throughout the city all day or over several days.

Ancient Rome is part of The Centro Historico (Historic Center), and encompasses Il Colosseo (The Colosseum), the thriving hub of the ancient city when completed in 80 AD as the world’s largest amphitheater where gruesome battles between gladiators and ferocious animals, brutal prisoner deaths, and other sports were the primary spectator activities. Things got very nasty at the the Colosseum.

Equally impressive, yet vastly different is the Vatican City. Also referred to as the Holy See, its where the Roman Popes have resided for over six hundred years. This City spans just over 100 acres and encompasses The Vatican, Vatican Museums (gateway to the Sistine Chapel) and library, Vatican Gardens, St. Peter’s Basillica, St. Peter’s Square and Belvedere Park. Considered by some to be the richest independent state in the world, Vatican city has its own newspaper, currency, broadcasting facility, stamps, and flag.

For many visitors to Rome, the most notable attraction is St. Peter’s Basillica, an inspirational masterpiece containing works of art by Michelangelo, Maderno, Bernini, Raphael and others in every aspect of the edifice. Those parts include the vaulted cupola, equestrian sculptures, Corinthian-fashioned columns, papal and saint statues and numerous monuments. There are also historic and symbolic altars, and the final resting places (under the Basillica) of numerous popes including St. Peter, its namesake and one of the apostles of Jesus.

Populate your itinerary with a Pantheon visit, one of Rome’s most famous attractions. Built in 27 BC and rebuilt between 117-120 AD, it is recognized for a massive, perfectly proportioned floating dome resting on an elegant drum of columns and pediments. The Pantheon was originally built as a pagan temple and later converted into a church. This historic and architectural masterpiece is situated in the Piazza Navona built in the Middle Ages, and replete with Renaissance and Baroque churches. Today, it is the place to see and be seen at the nearby boutiques, gelaterias and cafes.

Most likely the most international meeting place in all of Rome is Scalinata della Triniti dei Monti, the Spanish Steps. It’s where people watching, socializing with acquaintances from around the world, contemplating life and the wonders of Rome are the orders of the day. This multi-flight staircase has outstanding views of Rome and is popular year-round. Its most beautiful in Spring when the azaleas and verdant shrubbery are in bloom.

Above the Spanish Steps you will find the Triniti dei Monti Church, a Gothic and Renaissance-inspired building founded by the French in 1495 and one of the city’s best-known churches. Down below is Piazza di Spagna (Spanish Square) — named after the Spanish Embassy to the Holy See — containing the spectacular Fontana della Barcaccia. Stretching out like a handle to meet the square is Via Condotti, containing the most upscale designer boutiques (Gucci, Prada, Dolce, Gabanna), expensive restaurants and luxury hotels.

The incredible and awe-inspiring Palazzo Venezia, commemorating King Vittorio Emanuele II. Also formerly serving as both a Venetian and Austrian Embassy it is, in short, a stark white massive masterpiece of marble and stone dominating the Roman skyline for miles around. Leading off with the uniformed guard-flanked Tomb of the Unknown Soldier and eternal flame, you’ll find outstanding exterior monuments, unique statuary, galleries, exhibits and more, plus breathtaking panoramic views of Rome, particularly at sunset.

It’s challenging to describe what an impressive, inspiring and magnificent city that Rome is. It’s something you have to see and experience for yourself. Will the average average African American get extra attention when visiting these places? Yes, but most of it is good.