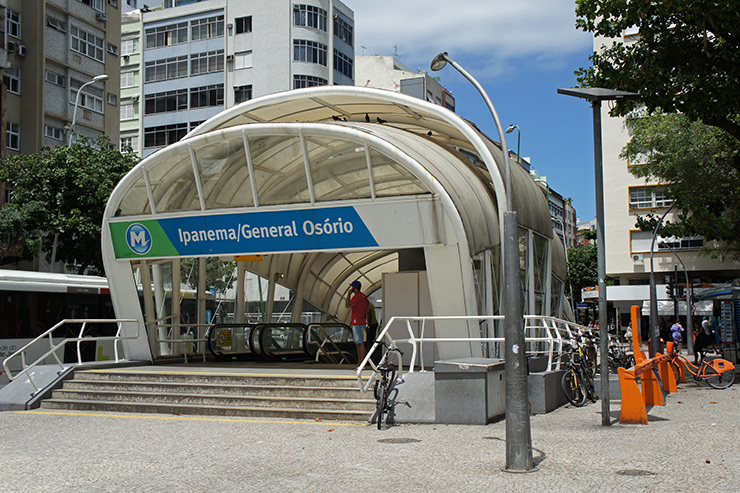 RIOgaleão – Aeroporto Internacional Tom Jobim (GIG) is one of the busiest airports in South America. Since 2012, every terminal and parking structure was upgraded for the 2016 Summer Olympics. Major airlines serving the airport include GOL Airlines, Aerolíneas Argentinas, KLM, American, United, Delta and Air Canada airlines. You can book direct flights from Miami, Atlanta, NYC, Houston and Toronto. The airport features WiFi, shopping, dining, lounge, passenger amenities and artwork sprinkled around each terminal. Don’t be surprised if you see a military jet take off. For historical reasons, some of GIG’s facilities are shared with the Brazilian Air Force. GIG Terminal Map

MetroRio, the rail rapid transit system, does not currently go to GIG Airport. But TransCarioca BRT (rapid buses) picks up passengers at Terminals 1 and 2, then goes to MetroRio Vicente de Carvalho Station, where one can transfer to MetroRio Line 2. Next, TransCarioca BRT line goes to Alvorada, where one can transfer to TransOeste BRT line. MetroRio operates Monday-Saturday 5am to Midnight; Sunday and holidays 7am to 11pm. One-way rare is R$3.50 (equals about US$1).

Assuming your international travel requires substantial luggage, Premium Auto Ônibus and taxis are better choices. Premium Auto Ônibus operates executive bus 2018 from GIG every 30 minutes between 05:30 and 23:30 hours. The route goes from GIG to the Central Bus Station, downtown Rio de Janeiro, Santos Dumont Airport, Copacabana, Ipanema and Alvorada Bus Terminal in Barra da Tijuca. Ticket counters for bus services are located at the terminal arrival areas. Taxis at the ground transportation level are plentiful. Though you can rent a car, its probably best to get to your hotel and deposit luggage first. Then, you can rent a car as you get comfortable with highways and driving styles in Rio, which are mostly similar to America.

Central do Brasil is Rio’s most important train station and terminal of its railway network and connection with Rio Metro and the Central bus station. Since international and interstate train service was canceled some years ago. Central Station is used mostly by SuperVia commuter lines in the region. Its does however, run one line to Olympic Stadium and another line to Maracana Stadium. Both SuperVia lines are popular with locals.

Though funding for construction is delayed, Brazil plans to build a High Speed Rail line between Sao Paulo and Rio de Janeiro’s Central do Brasil. The country is searching for new ways to get the HSR project funded.

MetroRio, is a rapid transit network inaugurated in 1979. When measured before its most recent expansion, MetroRio attracted over 625,000 weekday patrons to its 41 stations and 36 miles of track. So a number stations are as busy as Washington Metro System.

Metro Line 1 serves downtown Rio, South Zone tourist areas (Copacabana, Ipanema, LeBlon), and several neighbourhoods in the North Zone. It is fully underground while running from Uruguai Station to Ipanema/General Osório Station. Line 2 serves residential neighborhoods extending toward the north. It is a northwest-to-southeast line, and mostly at grade, but partly elevated. Metro Line 4, opened June 2016, connects Barra da Tijuca/Jardim Oceânico Station in the West Zone to Ipanema/General Osório Station on Line 1. Passenger trains vary between four and six cabins, depending on commute hour and major event. To the delight of patrons, many new train cabins have been added.

The fare costs around R$4.35 (about US$1.30) and the ticket can be purchased on the subway or when boarding select buses. Prepaid Card, valid on the MetroRio and BRT buses run by Metro company (not valid on regular city buses) can be bought at any Metro station. The card is free of charge, however a minimum prepayment of R$10 is required and recommended. Given the favorable exchange rate, why not put R$35 (~US$10) on your Prepaid Card to conveniently travel several times between Maracana Stadium Downtown, and the South tourist zone. MetroRio is open Monday-Saturday 5am-Midnight plus Sundays and holidays 7am-11 pm. See routes on MetroRio System Map

MetroRio will expand Line 3 from downtown Rio to the suburban city of Niteroi sometime in the future.