You are here: Home1 / International2 / Puerto Vallarta3 / Sculptures On The Malecon 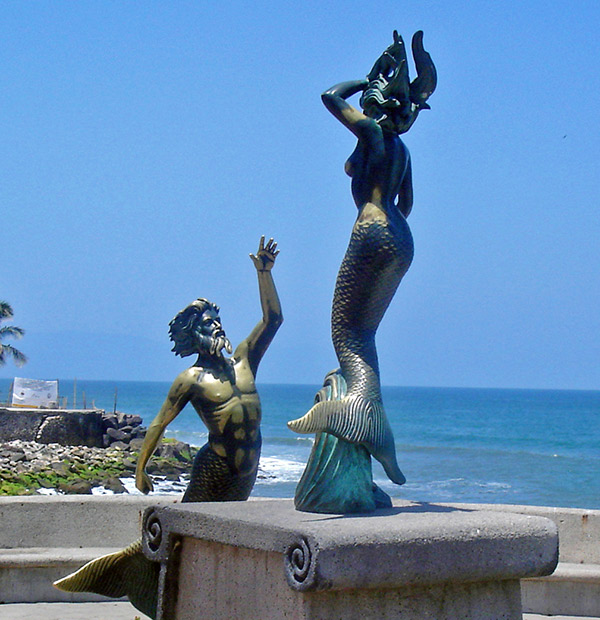 Triton & Nereid sculpture on the Malecon; (c) Soul Of America

Sculptures On The Malecon

Puerto Vallarta’s Bay of Banderas, home to some of Mexico’s finest resorts, golf, whale watching, sport fishing, surfing, jungle tours, horseback riding and some of the best restaurants in Mexico. And then there are the glorious Pacific sunsets. As the sun sets across the Pacific horizon of this resort city, you’ll notice some of the most beautiful rays – perfect for margarita conversations.

All of those features are grand. But the pride of Puerto Vallarta is the beach path of al fresco sculptures by some of Mexico’s finest artists, called the Malecon. Captivating, strategically placed sculptures draw romantic couples and friends alike to meet and be seen with them.

Nature As Mother by Adrian Reynoso depicts a spiraling wave on a snail, and in some obtuse way, represents the cycle of life.

Similarly, The Millenium by Mathis Lidice symbolizes the passage of time from the first living creatures emerging from the sea to man’s evolution today.

La Nostalgia, the most romantic sculpture, is said to grant long, happy marriages to couples that visit. Sculptor Ramiz Barquet was inspired to create the piece by the woman he loved, lost and later married. Lovers hopping onto it have worn its lap shiny.

Neptune and the Nereid by sculptor C. Espino and a favorite of men, depicts the Roman god of the sea and a mythical sea nymph.

The Seahorse by sculptor Rafael Zamarripa’ features a boy riding a seahorse. Its storied history began on the Malecon back in 1976, then was toppled and lost to the sea. Thankfully, a twin was reinstalled.

In Search of Reason by Sergio Bustamante inspires people to climb its 30-foot height. While you ask yourself what was the artist thinking, keep an eye on your kids who can’t wait to climb this one.

The Rotunda on the Sea by Alejandro Colunga was originally a very large ensemble of sea-inspired creatures in a semi-circular layout. It now consists of seven major pieces contained within a bigger rotunda.

Make your visit to Puerto Vallarta complete with several leisurely strolls on the Malecon, day and night.