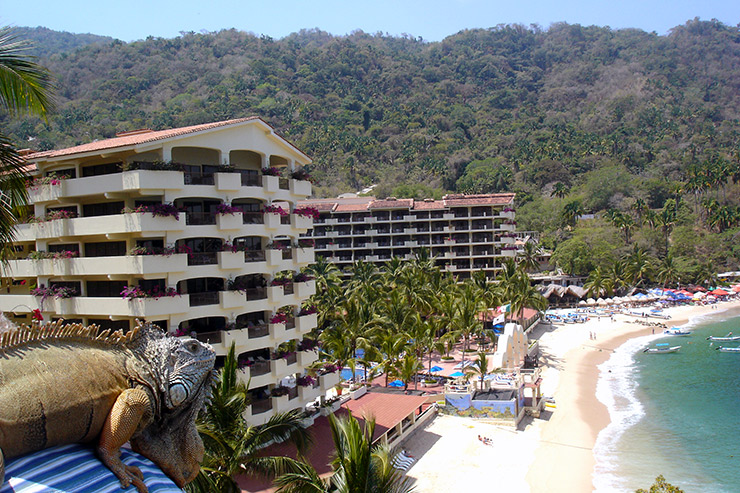 Playa de los Muertos
Dead Man’s Beach, located in the Zona Romantica, offers opportunities to Jet Ski, windsurf and even parasail and an assortment of excellent restaurants and bars. Try out some of the land sports as well, such as beach volleyball, which can be equally fun but cheaper than the water sports. The beach features plenty of space and a great spot for people-watching. Visitors also note that beachside peddlers can be particularly aggressive in selling trinkets. A firmly stated “no, gracias” cuts it short. Because of the high concentration of gay-friendly accommodations along the shore, Playa de los Muertos is also considered a party haven for LGBT travelers. You’ll find Playa de los Muertos running along El Malecon.

Playa de Destiladeras
Heading north from Nuevo Vallarta toward Punta de Mita, this handsome beach is easy to spot with its white-sand and mostly gentle waves beach along the north shore of Banderas Bay. Taking a bus from Bucerias the cost less than a dollar. Its near the prestigious Nahum complex. The beach is several miles long with soft powdery sand, and is nice, wide, flat and great for walking. It also has a gradual deepening of the water — that makes it a safe to roll in the surf or swim without ocean undertows. Vendors rent umbrellas, but bring your hotel towel.

Playa Las Animas
Is a beautiful little beach in the southern zone of Puerto Vallarta. It is the first stop water taxis make, called “pandas”, on the way in the southern section of the Banderas Bay. By land from Puerto Vallarta’s main square its near Boca – 11 miles away. Whether traffic is fast or slow, its he scenic ride between the jungle and hills on the left and turquoise sea waters on your right. You may see small fishing boats along its pier.

Mismaloya Beach
This the beach changed the future a Mexican town, from a sleepy palm tree laden fisherman’s village to a large world-renowned tourist destination. It was featured in several scenes of the popular 1964 movie, The Night of the Iguanas long before more resorts and villas were built here. You can imagine Ava Gardner and Richard Burton enjoying the beach scenes here, not to mention the crew. Its framed steep cliffs, stone walls and rocky outcroppings that provide a measure of seclusion and spectacular views from hotel rooms. Today, its surrounded by resort hotels, seafood eateries and merchants selling/renting all the comfort and fun amenities you would expect at a famous beach.

Playa las Gemelas
Located 10 miles south of downtown Puerto Vallarta, this beach is situated in front of condo and beach rentals. Hotel builders were attracted by its cerulean waves and sandy shore. Still, because Playa las Gemelas is relatively small, it can feel congested on warm weekends. To avoid the crowds, travelers should visit during the week and arrive in the morning to stake their spot in the sand. They should also pack their own supplies – drinks, snacks, sunscreen and towels – since there are no vendors or shops nearby. With its clear waters and sandy bottom, recent travelers liken Playa las Gemelas to a big swimming pool. They also say taking a cab or an Uber is the easiest way to reach it. Absent merchants, you’ll have to pack all your own supplies for a day’s outing. It’s located 10 miles down the coast from central Puerto Vallarta, but a cab ride usually takes about 30 minutes. Access is free.