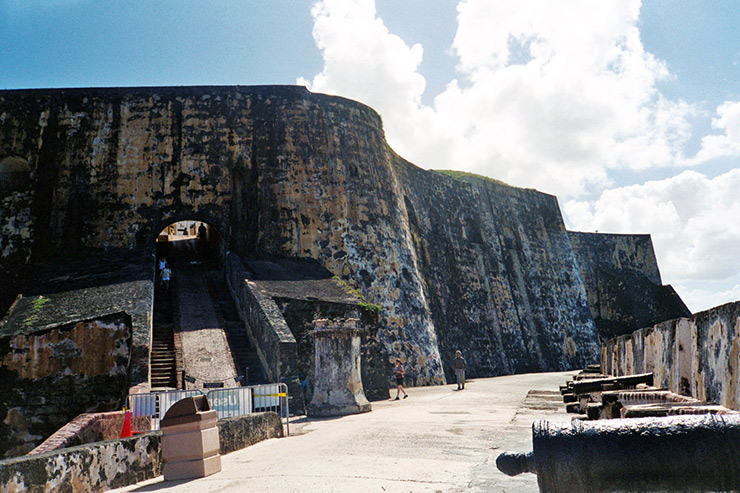 The smallest island of the Greater Antilles, Puerto Rico is roughly the size of Connecticut. Embraced by the Caribbean Sea and the Atlantic Ocean, Puerto Rico is approximately 2 hours from Miami (1,000 miles) and just under 4 hours from Atlanta, New York City and Boston.

The region also encompasses the two smaller islands of Culebra and Vieques off the east coast, and the tiny island of Mona, halfway between Puerto Rico and the Dominican Republic to the west.

About 100 miles long and 35 miles wide, Puerto Rico possesses a very diverse topography encompassing 9 lakes, over 50 rivers and streams, and the Cordillera Central (central mountain range) running through the center of the island, which extends between 1,000 and 3,000 feet, with Cerro La Punta as the highest peak at 4,398 feet. The busiest ocean port in the Caribbean, San Juan Bay brings in half of the region’s trade and over one million cruise ship visitors a year. Bayside shops carry everything from gold jewelry to island arts and crafts.

The population is a fusion of the indigenous Taino Indians the Spanish conquerors led by Christopher Columbus, and the African slaves brought by the Spanish as slaves. As a result, there are really no ethnic demographics stated beyond Puerto Rican and Hispanic, and those relating to other U.S. and non-U.S. citizens residing there.

Possessing a very rich, dynamic culture coupled with tremendous warmth and hospitality, Puerto Ricans have emerged since the 1500s in a variety of wonderful hues: fair, mocha, golden, dark-chocolate, brown, blonde, red, and brunette, to name a few. They are immensely proud of their African heritage, racism is really not an issue, and the people seize every opportunity to share that pride which appears in their blood, history, culture, cuisine and rhythm with everyone who visits the island.

Puerto Rico became a commonwealth and U.S. territory in 1898 as the result of the Spanish-American War where the U.S. captured all of Cuba’s possessions, then its denizens obtained U.S. citizenship in 1917 through the Jones Act. As a commonwealth, the island is closely associated with, but not tied to, the U.S. So the official languages are both Spanish and English, and most everything is written in both dialects.