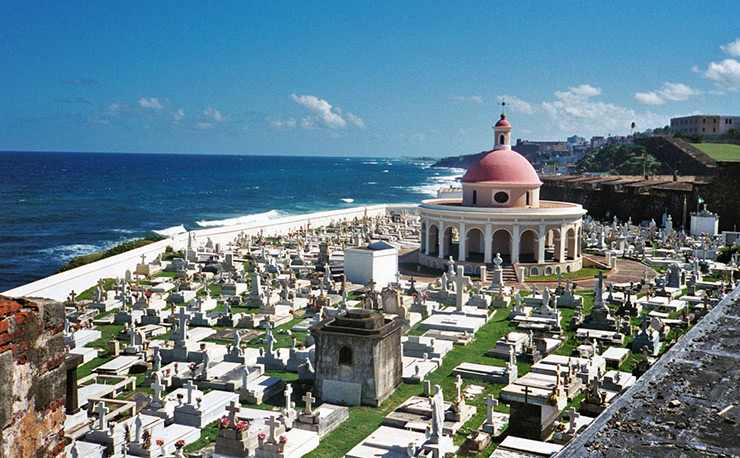 The precise year that Christopher Columbus landed on the picturesque island of Puerto Rico wavers between 1492 and 1493, depending on which historical account you read. However, the wonderful amalgamation of the island’s people encompassing the Taino Indians, Spaniards and Africans, is not in question.

Everywhere you look the culture depicts these three distinct influences, but they were not the only ones. Chinese workers built the railroads and remained, Spanish Loyalists fleeing revolution in South America, Corsicans who populated the coffee county, French immigrants from Haiti and Louisiana, a smattering of Scots and Irish, and droves of North Americans following the Spanish American War also made an impact on the cultural landscape here over the years.

The Spaniards originally named the island “San Juan Bautista” in honor of St. John the Baptist, and the capital was called Puerto Rico (“Rich Port”). Later, the names were switched, making the capital San Juan and the island Puerto Rico. After demonstrating to the Spanish their industriousness in mining gold and silver (the city was used as a transshipment port for gold mined in Puerto Rico and gold and silver from South America to Spain) and their agricultural acumen, the Indians were exploited and enslaved into hard laborers. After 50-plus years of this severe, suffering work which was foreign to them, loss of life of thousands attributed to failed uprisings against their domineering rulers, and death from diseases brought to the island from different parts of Europe, Puerto Rico’s Indian civilization was eventually wiped out.

In the early to mid-1500’s, concerns about threats from European enemies prompted Spain to begin constructing massive forts around the city of San Juan. The strengthening of El Morro, San Cristóbal, and San Gerónimo Forts as well as the city walls, were the stronghold elements of these successful defenses.

In 1570, the gold mines were declared depleted, and the Spaniards went in search of other peoples to work in the sugar cane, tobacco and coffee fields and plantations—the new growing island enterprises of the day. That’s when they began bringing Africans to the island as slaves. Given that Spanish women did not accompany the men on their new world journeys, the Spanish men mixed with the Indian and African women, resulting in an “original Puerto Rican” who generations later continues to be a blending of Indian, Spanish and African peoples.

The 18th century brought hurricanes, droughts, plagues, and a continuous threat of attack on the island’s shores, as the British, Dutch, and French remained intent on capturing Spain’s possessions in the New World. When the abolition of slavery was declared in Puerto Rico in 1873, the Africans living in the northeast side of the island founded the town of Loíza. Today from State Road #3 in Canóvanas north to the coastline and west to the Isla Verde sector of the metropolitan area, the people are all of African descent.

The United States entered the picture in 1897 when Puerto Rico was granted a Letter of Autonomy from Spain, allowing it to enter into free commerce with the U.S. and European colonies. One year later, the gains from the Spanish-American War made Puerto Rico a U.S. territory. A few decades later President Franklin D. Roosevelt launched the Puerto Rican Reconstruction Administration that provided agricultural development, public works, and electrification of the island. By 1951, Puerto Rico acquired the right to establish a government with its own constitution and, in 1952 The Commonwealth of Puerto Rico came into being.

In the time since 1952, a strong bond and relationship with the U.S. “mainland” has endured, although each of the island’s three political parties have their divergent views regarding how Puerto Rico should be positioned. Nevertheless, life in Puerto Rico largely resembles most U.S. mainland states in business, education, commerce, dining, day-to-day activities, and more. Puerto Rico is truly a spectacular oasis filled with a wealth of history, a vibrant culture, outstanding cuisine, enveloping music, and beautiful people that are so warm and welcoming, that one can’t help but fall in love with them and their island.