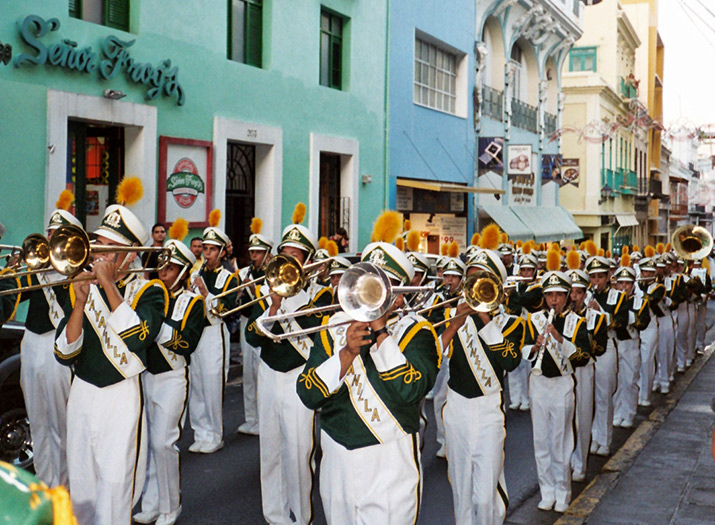 For a charming overview of Old San Juan, Puerto Rico historic sites, take the walking tour of Viejo San Juan. Get acquainted with the Old City. Hop aboard the no-charge trolley cars at anyone of the clearly marked stops. Narrow cobblestone streets, colorful colonial buildings, fortresses overlooking the Atlantic Ocean, fascinating museums and art galleries, handcrafts on the corners and everything bathed by a tropical breeze.

Bacardi Rum Factory
Take a taxi or ferry from the cruise port), the Bacardi Tour is one of the island’s favorites; The Mini-Tram provides a free fun ride across Bacardi’s Tropical Gardens as well as a tour with samples of the world-renown rum. The factory is located 15 minutes from Old San Juan in Cataño.
PHONE: 787-788-8400
WEBSITE: http://www.bacardi.com

Castillo San Cristóbal
San Cristóbal Fort stands guard at the entrance to what was once the eastern gate to the walled city of Old San Juan. It was begun in 1635 and was finished in 1678, although modifications were made well into the 18th Century.
ADDRESS: overlooking Plaza Colon, next to the city entrance
PHONE: 787-729-6777
WEBSITE: http://www.nps.gov

Fuerte San Felipe del Morro
El Morro, which means “promontory” in Spanish; surrounded by the Atlantic Ocean and San Juan Bay on the northern tip of Old San Juan, and is one of the largest forts built by the Spaniards (between 1540 and 1783) in the Caribbean, to protect San Juan from attack by sea. U.S. government later added an annex of its own during World War II. Among many attractions is a maze of secret tunnels, dungeons and a small museum with information on its history; a UNESCO World Heritage Site and a National Historic Site.
PHONE: 787-729-6754

Casa Blanca
The White House: for 250 years it was the residence of the descendents of Juan Ponce de León, the first governor of Puerto Rico; now a museum of 16th and 17th century family life that houses a miniature replica of a Taíno village.
ADDRESS: 1 Calle San Sebastián
PHONENE: 787-977-2700 or 2701

Fort San Cristóbal
Overlooking the land entrance to Old San Juan, Fort San Cristóbal is connected to El Morro through tunnels beneath the ancient walls (the tunnels are not open to the public). Designated as a National Historic Site and part of a World Heritage Site, its jurisdiction falls under the National Park Service.
PHONE: 787-729-6960
WEBSITE: http://www.nps.gov

El Palacio Santa Catalina
Also known as La Fortaleza (The Fortress), this palatial structure was built in 1540; La Fortaleza is the oldest governor’s mansion in the Western Hemisphere still in use. Proper attire is required and guided tours are available in English every hour, and in Spanish every half hour.
ADDRESS: Calle Recinto Oeste
PHONE: 787-721-7000

La Muralla
Built mostly between 1539 and 1641 using sandstone blocks up to 20 feet thick, the wall was completed in 1782; protected the city against enemy attacks; at the western mouth of the bay and you will see Isla de Cabras (Goat Island), and a small Spanish fort built in 1610.
ADDRESS: City Wall at the end of the promenade parallel to San Juan Bay.

Puerta de San Juan
San Juan Gate: one of six original massive wooden doors that centuries ago were closed at sundown to protect the residents, Puerta de San Juan is the point of re-entry inside the walls of the city
ADDRESS: West side of La Muralla at Calle Recinto Oeste

Luis A. Ferré Centro de Bellas Artes
Fine Arts Center: when anyone in Puerto Rico thinks of serious music, drama or dance, they think of the Luis A Ferré Centro de Bellas Artes. The modern architectural masterpiece in Santurce houses four theaters, ranging from a few dozen to almost 2,000 seats.
Ponce de Leon Avenue, stop 22 in the center of the Santurce area of San Juan
PHONE: 787-620-4444

Teatro Tapia
Built in 1832, Teatro Tapia is one of the oldest theatres in western hemisphere
ADDRESS: Calle O’Donnel and Calle Fortaleza
PHONE: 787-721-0180

El Yunque Tropical Rain Forest
The Caribbean National Forest, better known as El Yunque, is the only tropical rainforest managed by the U.S. Forest Service, and well-known for its dozens of trails, observation towers and waterfalls. Named after the benevolent Indian spirit Yuquiyu, the forest is home to some 240 different species of trees, 50 species of orchids, 150 kinds of ferns and 68 bird species, plus miles of marked hiking trails that allow you to explore some of the forest’s crags and La Coca waterfalls.
ADDRESS: From San Juan take Road 26 towards Carolina until you reach Road 3. Take Road 3 towards Fajardo for about 20 minutes until you get to Rio Grande. Take Road 191 to El Yunque