You are here: Home1 / International2 / Pondicherry 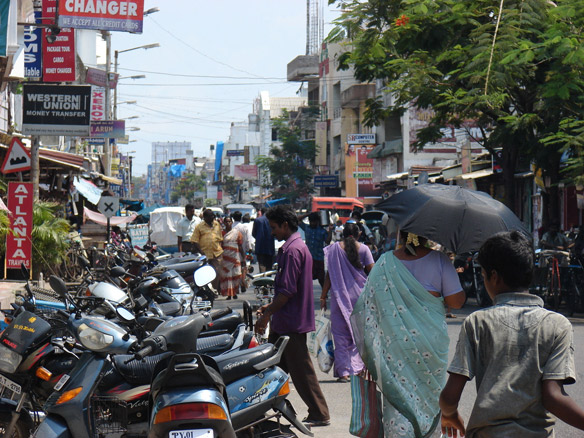 As a Francophile and a frequent traveler to India, I have long been fascinated by the prospect of visiting the one remaining French enclave on the subcontinent—Pondicherry. Located in the state of Tamil Nadu on the southeast coast, this seaside city still counts French among the languages spoken. It even has a French quarter— La Ville Blanche — complete with its own Hôtel de Ville (town hall).

I had the opportunity to visit Pondi (as the natives call it) for three days after a grueling, but successful week of business activities in nearby Chennai. I planned to use my brief time there as a retreat of sorts, as I needed to begin a couple of writing projects in a peaceful environment. But I also wanted to experience the culture in this unique part of south India.

I stayed at Le Dupleix, a small, handsome hotel named after the most successful French governor of Pondicherry, Marquis Joseph François Dupleix. Under his rule, the French gained control over much of south India and the British found their circle of influence restricted to Madras (Chennai). Dupleix’s expansion of French control extended the district of Pondicherry (now called Puducherry, a derivative of the Tamil word meaning “new settlement”) to areas that are now part of the states of Kerala and Andhra Pradesh. Pondicherry town is only a small part of this district.

The hotel occupies what was once the governor’s mansion. This 18th century building has been completely restored using traditional methods of construction and finishing. As an example, the walls of the hotel were refinished with a traditional lime plaster called “Chettinad Egg Plaster” consisting of egg white, powdered sea shells and yogurt. Each layer of plaster was polished by hand! Exquisitely carved wood paneling from Dupleix’s home adorns the walls. Each of the hotel’s 14 rooms is designed differently. Mine was located on the corner of the top floor, with floor-to-ceiling windows on three sides that overlooked lush trees shading the surrounding homes and businesses. 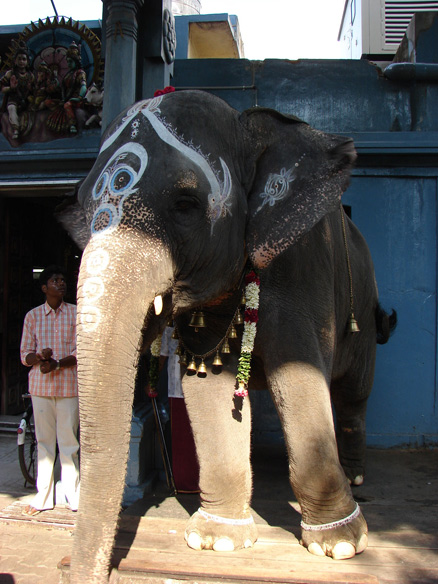 On the one day that I allowed for sightseeing, I spent four hours on a self-guided heritage walk. I obtained a map from the Pondicherry tourism office that provided routes for the French quarter and the Tamil quarter, which is roughly divided into Muslim, Christian and Hindi areas. While I didn’t attempt to visit every site listed on the map, I saw everything that I wanted to see. This included most of the French quarter, a Hindi temple, a mosque, the Grand Bazaar, and a couple of grand Catholic churches. 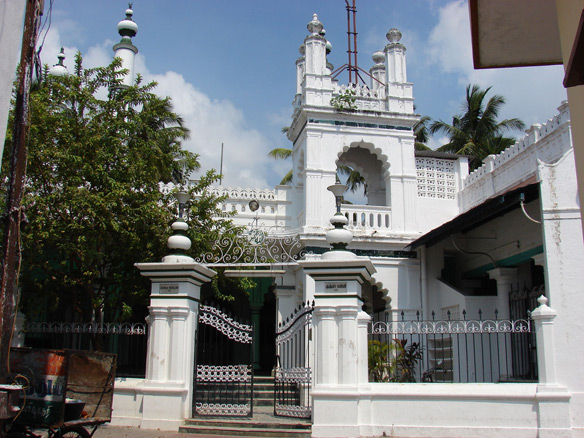 The French quarter is on the easternmost side of the city, bordered by the Bay of Bengal. The beach is long and narrow and not particularly beautiful. Still, if you love the sea, it serves its purpose. Along the road that parallels the beach (Goubert Avenue) are the tourist office, a statue of Gandhi, and a beachside café. Many government buildings are located along this road, including the Hôtel de Ville. With the exception of a few buildings at the southern end of the beach, most of the structures are not very interesting from an architectural standpoint.

Going westward, however, things change dramatically. One immediately notices the prominence of French colonial architecture along rue Dumas, one block away from the beach. Numerous villas sprawl behind high, brightly painted walls behind which foliage and flowers grow abundantly. The Eglise Notre Dame des Anges rises above the dwellings in the neighborhood, looking as pristine as the day it was built. Today’s edifice, constructed in 1855, is the fourth iteration of a church that was razed by the British in 1761. Masses are performed in French here. The entrance to the Hôtel de Ville lies on this street. Relative silence reigns, as signs forbidding the honking of horns (a ubiquitous practice for drivers in India) are posted throughout the French quarter.

While I didn’t hear much French spoken in the streets, people who greeted me during my walk said “bonjour” and addressed me as “Madame”.

One feature of this section of the quartier that immediately captured my interest was the sidewalks and gutters. The broad sidewalks are built up to almost a foot above ground to accommodate drainage, a system that is lacking in other areas of India that I have visited. On many streets, the edge of the sidewalk is marked with alternating black and white rectangles; whether this is to alert pedestrians or drivers of the location of the edge of the sidewalk, I do not know. In this part of La Ville Blanche, however, they served to further emphasize the presence of the gutters for me. I noted that most people prefer to walk in the street, even though the sidewalks provided more shade. (It was amazingly hot at 8 AM, the time that I began my exploratory trek.)

On Rue Suffren near the western edge of the French quarter lies a villa that houses the Alliance Française, the French language and cultural organization with affiliates throughout the world. It was abuzz with predominantly “60-something” Francophones who were waiting for some event to take place, or perhaps to embark on a tour. Taking a quick look around the premises, I found a large courtyard, which serves as common ground for a dining area and a library, among other things. A large, overhead fan hanging from an arcade bordering the courtyard provided a cool breeze to augment the effect of the trees that shade the courtyard. 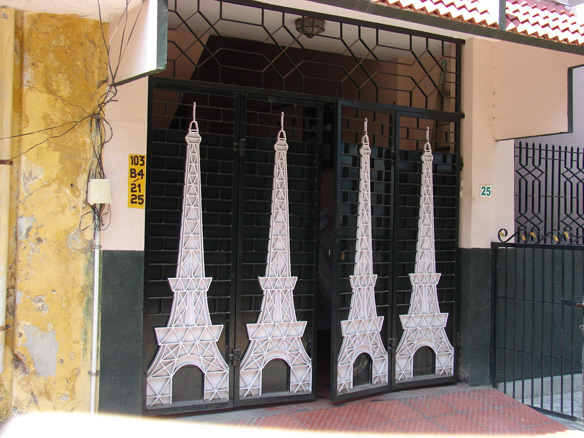 Four Eiffel Towers of a door in the Muslim Quarter; credit Discover Paris

Leaving the Alliance Française, I crossed the canal that separates the French quarter from the Tamil quarter, which was formerly known as La Ville Noire, or Black Town. I immediately noted a change in the architecture compared to the French quarter—the style is called “vernacular” and it is prevalent in Tamil Nadu.

In the Muslim area, a distinctly Islamic flavor is present in the façades of buildings and in the grillwork that covers windows and entryways. Amusingly, a grill in this area bore the image of not one, but four Eiffel Towers! 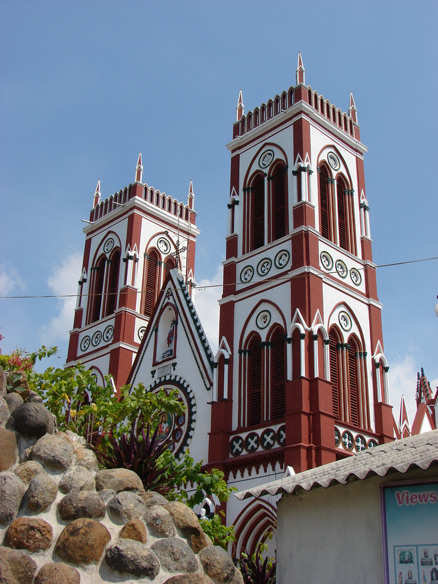 The streets in this area were not as well kept as in the French quarter and gutters were not as numerous. Women with large steel tubs filled with fruits and vegetables wended their way through the streets and cried out from time to time to announce what was available for sale. I observed a man with a large cart filled with produce doing the same. I stopped briefly at a mosque before making my way toward an immense structure in the distance. It was the Sacred Heart Church—Pondicherry’s Gothic marvel. I was surprised and touched to see several persons in the church with heads bowed intently or praying aloud at the feet of a statue of a prostrate Jesus. It was a poignant reminder that several faiths co-exist in India.

The main thoroughfare of Pondicherry, Rue Mahatma Gandhi, runs through this part of town. Following this street from Sacred Heart several blocks northward, I came to the Grand Bazaar. Upon ducking into this dimly lit, enclosed marketplace, one has the impression of entering Ali Baba’s cave. This side of the market is devoted to produce. It was so dim inside that it was difficult for me to see the merchandise, though I wondered later if I simply had not given my eyes time enough to adjust to the relative darkness after having been in brilliant sunlight. Walking up a slight ramp, I came to a better lit area that was entirely devoted to seafood. Here, young cats dined on the odd bits of fish, shrimp heads and tails that were piled in several locations on the floor while women standing above them made their purchases. All the vendors in the bazaar were women.

Despite the geographical division of the French and Tamil quarters, one finds elements of each culture in both quarters. A Hindi temple, complete with live elephant, and the world-renowned Sri Aurobindo Ashram (a spiritual and educational center) are located in the heart of the French quarter. “The Mother” (née Mirra Alfassa; 1878-1973), a Paris-born disciple of Sri Aurobindo, is responsible for having developed the center into what it is today. Though not as numerous as in the Tamil quarter, decorations made with rice flour on the ground in front of the entrance to a dwelling or business (called kolams) can be seen around La Ville Blanche. On the western side of the canal, I saw Catholic schools and convents in the Tamil quarter. In addition to the Sacred Heart church, the colossal Cathedral of the Immaculate Conception is also located there. One of the great Christian churches in Pondicherry, the cathedral’s architecture was inspired by the Val-de-Grâce church in Paris. 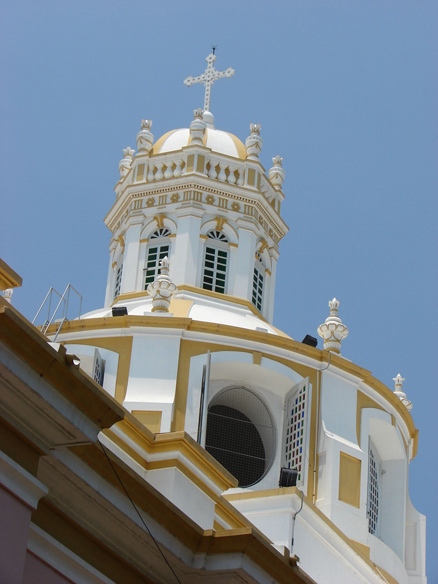 All in all, I consider my brief visit to Pondicherry to be a rewarding experience. Restful yet productive, it also allowed me to satisfy my yearning to see this little French corner of India. For Francophiles visiting India, this town is a “must do”.