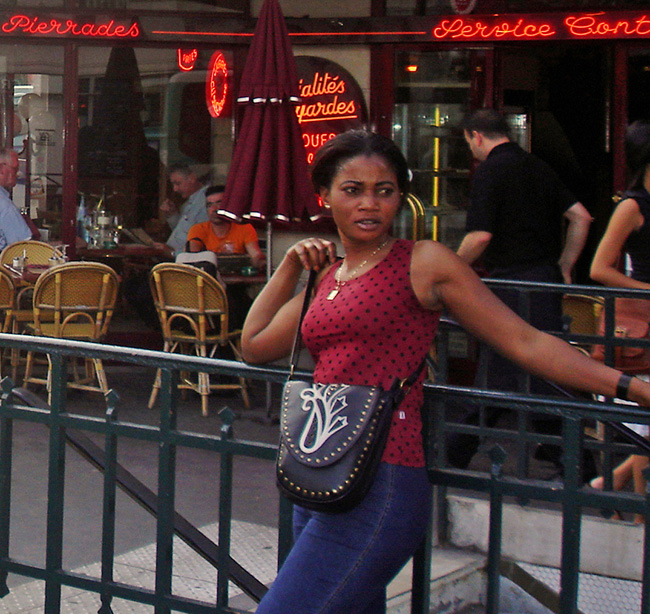 Sistah waiting for taxi in Paris

Even in spring or summer, check the weather report before leaving your hotel. Paris often has sunshine and rain on the same day.

Though French is proudly the official language and English is spoken by many locals. Locals respect Americans more when they first attempt to speak French.

Everyone uses the Paris Metro to get around and many visit the train stations.

Electricity connection is different than America, so bring an adapter or buy a more expensive one at the airport.

Buy a Paris Museum Pass to avoid long lines and save money.

Don’t take close up photos of the American Embassy. Armed guards will not look kindly at you as they approach.

Pedestrians do not have the right of way. When crossing the street at a major intersection, look both ways and walk swiftly.

Locals dress chic at nice restaurants and galas. During summer months however, wearing jeans and a t-shirt is acceptable. For clues, note how locals dress entering the Metro station. Dress in a similar fashion. Women wearing short-shorts may result in unwanted attention from many men.

Since Paris is a walker’s paradise, bring good walking shoes.

For budget meals, if you want more than a quick hamburger, try lunch specials at the sidewalk cafes. Places serving American cuisine usually have large portions.

Use French when explaining that you want “take-out”, even if the waiter appears to speak English. One sister told her English-speaking waiter to take away the remaining half of her pizza. He threw it in the garbage because “take away” doesn’t mean “take-out” to English as a Second Language speakers in France.

Hotels have expensive rates on international phone calls. To avoid them, schedule with friends & family back in America when you plan to use Apple FaceTime for iPhone-to-iPhone/iPad calls. Otherwise use Skype for Android device calls.

Unless you are fluent in French, bring a French phrasebook. You will use the French equivalent for the following English words/phrases often so memorize their French pronunciation before your trip: Sir, Madame, Hello, Please, Thank You, Excuse Me, Goodbye, I don’t understand, Where is?, How much?, Do you speak English and Where is the toilet?

Charm and good manners are appreciated by the French. You are expected to greet small shop owners, elderly people, etc. The more you use in French (Sir, Madame, Hello, Please, Thank You, Excuse Me), the more help you will receive. Avoid being an “Ugly American.” Start every interaction in French, then follow with English with a pleasant voice. You will receive assistance from most people, if they understand some English.

Paris hotel rooms are very small compared to the U.S., so pack accordingly. If you request a non-smoking room in a non-American brand, it can mean that they just opened the windows to air it out before you arrived.

Air conditioning is not available in many older hotels.
Confirm that breakfast buffet is included in your room price before going to the breakfast room. If you need to cancel a hotel room, confirm the hotel’s cancellation policy and get the cancellation “in writing” in order to avoid cancellation fees.

Public display of affection among couples is more common than the U.S. Some sisters, especially single women age 35 and over, may receive more attention from local men than they are accustomed to in the U.S. If the attention is unwanted, firmly say “No.” Seek assistance from others if necessary.

Several Metro stations attract hustlers trying to sell you something or want to take you somewhere. Don’t engage in conversation with these men. Just walk away.

American sisters may notice a significant increase in the number of French sisters dating European men compared to the U.S.

Compared to major U.S. cities, Paris is a safe city. You should use common sense when walking around. Sisters traveling alone should assume they are traveling in a major U.S. city and take the necessary precautions.

Pickpockets don’t fit a profile and include children. Use care at tourist attraction areas and on public transportation.

Many homeless people sleep in the Metro stations and near ATM machines. They are usually harmless, but often beg for money in 2-3 languages.

Walking along the Champs Elysees, a sister decided to stop and look around. She was approached by a young girl with a card that stated that she was mute, poor, from a family of many children and she hand signalled for a donation. When the sister refused to give the young woman money, she said “Ah! You are American”, then turned the card over from the French side to the English side. The mute girl suddenly discovered her voice!

Many sisters and brothers living in Paris are from French-speaking African and Caribbean countries. Don’t expect them to greet you the same way that they do in America. If you want to see people of African Descent concentrated in one area, check out Little Africa (Metro Station: Chateau Rouge) or the “Black Hair” area (Metro Station: Chateau d’Eau). It’s like visiting Harlem or a city in West Africa.

If you have not traveled to Africa before, you may not have experience with the way that Africans may stare at African Americans. Usually, they are staring out of curiosity.

One sister had many local people of African descent stare at her on the Metro trains and various places around Paris without speaking to her. Due to the language barrier and culture, many locals did not know how to approach her. The U.S. custom of a head nod or “Hello” was not familiar to them.

Currency is the Euro and major credit/debit cards are accepted by most establishments. Banks are open from Monday-Friday 9:30am-5pm. Some are open on Saturday. Bring at least one debit card and one credit card from America. ATMs are plentiful and the most convenient way to get Euros.

The ATMs only accept PIN numbers with 4 digits, so check with your bank before going. Use the ATM card to purchase Euros, since they usually have a better rate than many currency exchange offices.

Locals don’t wear money belts because they stand out as “tourist.” Get one that you wear inside a shirt or blouse. Otherwise, place money in hidden pockets or deep inside your bag, so that it’s hard for pickpockets. Put only things that you are willing to lose in your visible pockets. When using the Metro, carry little cash, a debit card, and a copy of your passport for identification. It’s easier to replace those items.

Don’t be the sister who wore a visible money belt as a purse and had it stolen.