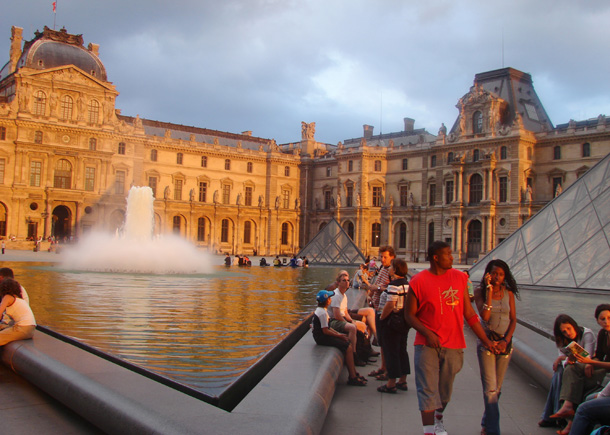 Musee National de L’Orangerie
Located in the Tuileries Gardens, this elegant museum invites you to view Claude Monet’s vast collection of Water lilies, as well as master works by Renoir, Cézanne, Matisse, Picasso, or others; you can rent English audioguides for a small fee
ADDRESS: Jardin des Tuileries, Paris
DAYS & HOURS: Wed-Mon 9a-6p; closed on May 1, July 14 and December 25
PHONE: +33 (0) 1 44 77 80 07
TRANSIT: Concorde Metro Station and a nearby Batobus Stop at the Louvre
ADMISSION: Normal admission; No entry fee on the First Sunday of each month
WEBSITE: http://www.musee-orangerie.fr

Centre Pompidou – Musee National D’Art Moderne
The Musée national d’art moderne showing over 1,300 works, and a more diversified itinerary to highlight the artists of the first half of the 20th century; Twenty or so exhibitions a year, spanning 20th-century art as it shone through painting, sculpture, photography, architecture, design, video productions and more. The striking building of the 20th century, was designed by Renzo Piano and Richard Rogers. The top floor opens out onto a wide-open, far-reaching view of Paris, featuring the Sacré Coeur, Notre Dame, Eiffel Tower, Pantheon. There are also a fine gift shop, restaurant and a bar; you can rent English audioguides for a small fee
ADDRESS: Place Georges Pompidou, Paris
DAYS & HOURS: Fri-Wed 11a-9p; Thu 11a-11p
PHONE: +33 (0) 1 44 78 12 33.
TRANSIT: Rambuteau, Hôtel de Ville, Châtelet-les-Halles Metro Stations and Batobus Stop at the Louvre Hôtel de Ville
WEBSITE: http://www.centrepompidou.fr/en

Arc de Triomphe
A unique panoramic view over the Champs Élysées, the most beautiful avenue in the world; In 1806, Napoleon I ordered the construction of the Arc de Triomphe to honour the Grande Armée. Inspired by the arches in Antiquity, this iconic monument carries the illustrious names of the nation and houses the tomb of the unknown soldier, for whom the flame is lit every evening; the layout makes for a thorough understanding of the monument’s history and its national and international symbolic importance; soak up the unique panoramic view over the Champs Élysées from the terrace.
ADDRESS: Place Charles de Gaulle, Paris
PHONE: +33 (0) 1 55 37 73 77
TRANSIT: Charles de Gaulle-Etoile Metro Station and Batobus stop near Champs-Élysées
DAYS & HOURS: Daily 10a-11p; last entry 45 min prior to closing; closed on January 1, May 1 and December 25
WEBSITE: http://www.arcdetriompheparis.com

Louvre Museum
A world landmark, it is located on the Right Bank of the Seine in the 1st arrondissement. The Louvre features 35,000 objects from prehistory to the 21st century, exhibited in 650,000 square feet. Originally built as a fortress in the late 12th century under Philip II, the Louvre is the world’s most visited museum today. The museum opened in 1793 with majority of the works being royal and confiscated church property. The collection was increased under Napoleon and for a time, the museum renamed the Musée Napoléon.
DAYS & HOURS: Open Wednesdays-Mondays 9a-6p (until 10p on Wednesday and Fridays)
ADDRESS: Musée du Louvre
TRANSIT: Métro: Palais-Royal Musée du Louvre (lines 1 and 7)
WEBSITE: http://www.louvre.fr/en

Musée d’Orsay
Housed in the former Gare d’Orsay, a Beaux-Arts railway station built between 1898 and 1900. The museum holds mainly French art dating from 1848 to 1915, including paintings, sculptures, furniture and photography. It houses the largest collection of impressionist and post-impressionist masterpieces in the world, by painters including Monet, Manet, Degas, Renoir, Cézanne, Seurat, Sisley, Gauguin, Van Gogh and many others.
DAYS & HOURS: Tuesdays-Sundays 9:30a-6p (until 9:45pm on Thursdays)
WEBSITE: http://www.musee-orsay.fr/en/home.html

Musée du quai Branly
Features the indigenous art and cultures of Africa, Asia, Oceania, and the Americas. The museum collection has 450,000 objects, of which 3,500 are on display at any given time, in both permanent and temporary thematic exhibits. Opened in 2006, it received 1.3 million visitors in 2013. It serves as both a museum and a center for research. The museum takes its name from the bank of the Seine at that location, which is named for the French scientist Édouard Branly.
ADDRESS: 37, quai Branly, Paris
PHONE: 01.56.61.70.00
TRANSIT: Metro: Pont de l’Alma (RER)
DAYS & HOURS: Tue-Sun 10a-6:30pm, Thurs until 9:30pm, Closed Mon
WEBSITE: http://www.quaibranly.rf