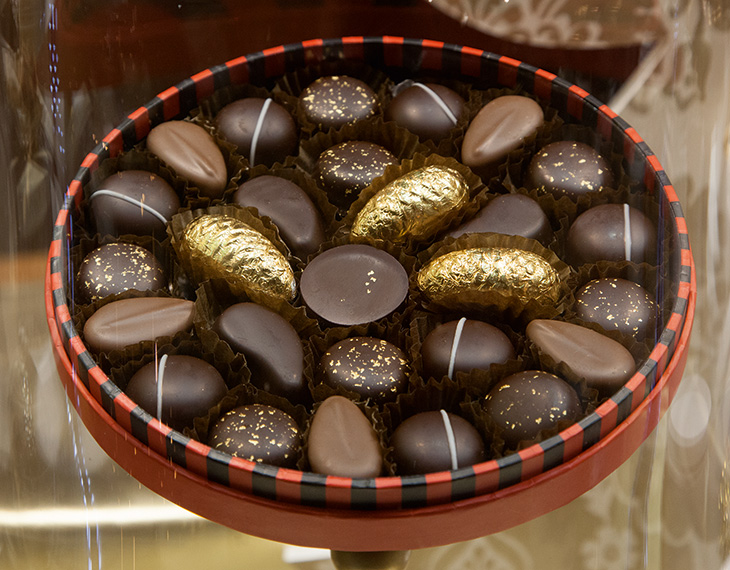 Monique Wells, founder of Discover Paris!, has lived in Paris with her husband, Tom Reeves since 1992. She was named Black Culture and Heritage VIP in Paris. She has authored several wonderful books and itineraries, including Paris Reflections: Walks Through African American Paris and the Black Pearl Walk. Enjoy Monique’s insights of Paris Gourmet Chocolatiers.

For adults with a discriminating palate for chocolate, not just any store-bought confection will do. Fortunately for them, Paris Gourmet Chocolatiers offer many choices. The Left Bank seems to attract these artisans, perhaps because it is an area of Paris known for its creative energy.

The Saint-Germain-des-Prés area is particularly favored in this respect. Pierre Hermé has a boutique on rue Bonaparte, and Pierre Marcolini has one on rue de Seine. At over 140 years old Ladurée has a shop on the corner of rue Bonaparte and rue Jacob. These well-established professionals have gone global, with shops in the United States, Japan, and the Middle East.

Other chocolatiers are less known, but just as talented and creative. Only a few blocks away from the famed Deux Magots and Café de Flore, and only a half a block away from Ladurée, one finds the colorful boutique of Pascal Caffet. Caffet and his wife, Florence, have worked together for years to build their establishment. They started in the city of Troyes, but realized that they needed a foothold in Paris, if they wanted to take their business to the next level. Caffet is a pâtissier; he works with chocolatier Alexandre Gyé-Jacquot, who, at the age of 32, has the distinction of being a Meilleur Ouvrier Chocolatier (loosely translated as Best Chocolate Artisan) of France.

The brochure that presents Pascal Caffet’s chocolate collection is stunningly attractive. Each individual bonbon might well be a precious stone, shown to its best advantage and accompanied by a succinct description of its composition. The source of the majority of the cocoa used for fabrication is duly noted, with Venezuela being favored for dark chocolate and the Ivory Coast being favored for milk chocolate. 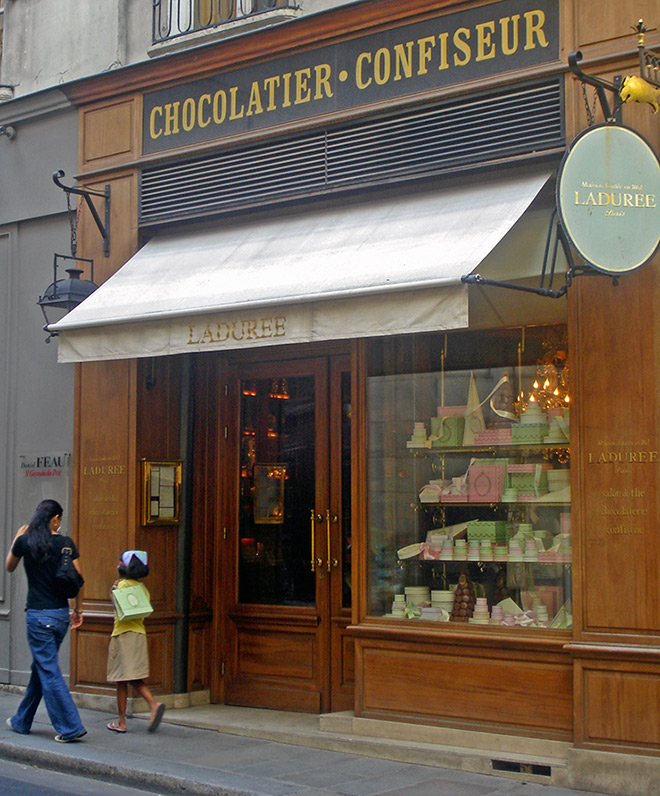 Flavors run from the traditional to the slightly exotic.Ganaches (fillings) might be as simple as caramel or an almond or hazelnut praliné, or they might be perfumed with passion fruit or Earl Grey tea. Bonbons shaped like champagne corks are filled with raspberry-, hazelnut-, or champagne liqueur-flavored ganaches. Then there are the chocolate-coated almond-paste creations, flavored with kirsch, orange, lime, or pistachio. There are also mini bars of solid chocolate from Venezuela, Madagascar, Brazil, Ivory Coast.

Going a bit deeper into the Left Bank, one comes to the boutique of yet another one of France’s up-and-coming chocolatiers — Jean-Charles Rochoux. This middle-aged man is fulfilling his lifelong dream of creating fantasies in chocolate.

The following is one of the entries that one finds under “The Ideas Laboratory” on Rochoux’s website, ”Because of the many hours of work that it needs, because it disappears as soon as it is consumed, even though it has been yearned for, chocolate represents a form of ultimate, absolute luxury.” This sentiment embodies the spirit of the artist and his attitude toward his chocolate creations.

Imagine chocolate-covered strawberries mounted atop a solid bar of chocolate. Rochoux’s Saturday chocolate bar (la tablette de samedi) bursts with the flavor and juices of a different fruit every weekend. Only the freshest, highest-quality fruits are chosen for his bars. Though Rochoux prefers to change fruits weekly, in the early spring, his choices tend to be limited to strawberries and raspberries. He favors the prized Gariguette strawberry for his tablettes. This French strawberry fetches a handsome price in the market because the plants only bear fruit once during the growing season, and Rochaux’s use of it naturally drives up the price of his product considerably.

When asked whether or not his clientele readily purchases such items, he responded that his clients come to him for quality, not for price. But he also emphatically stated that his customers come from a wide range of economic backgrounds and that even those who are on restricted incomes or are struggling financially can find their pleasure in his boutique. They may come in less frequently than others, or they may buy fewer items, or both. But they come because they seek the gratification that only a well-crafted morsel or bar of chocolate can provide. 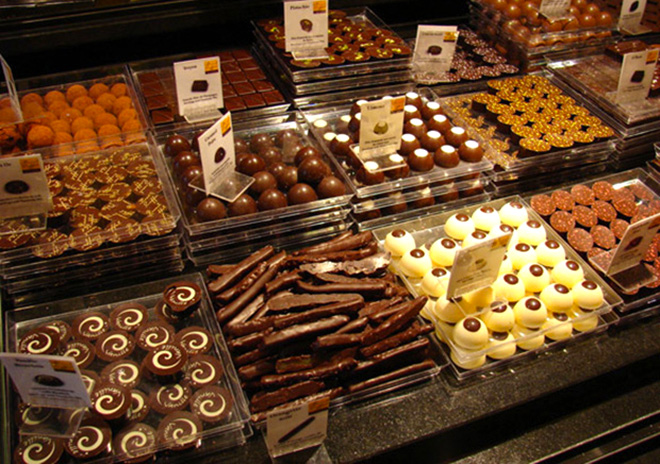 Here’s a few tips for shopping in a French chocolate boutique. Dark chocolate creations tend to outnumber milk chocolate ones, no matter which boutique you visit. However, the same ganache filling can often be found coated in dark or milk chocolate. White chocolate is almost an afterthought. Be prepared to find an overwhelming selection!