You are here: Home1 / International2 / Paris3 / Black Images at The Louvre 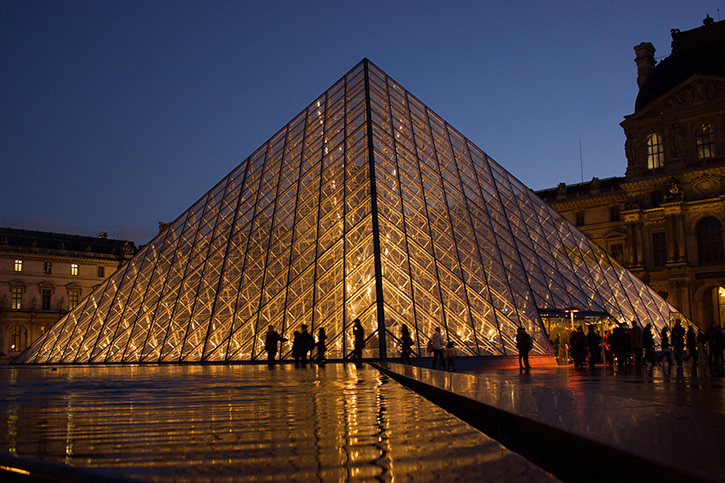 Black Images at The Louvre

Paris has a feast of Black Images at The Louvre, including marble statues and several of the finest Impressionist paintings, sculptures and craftwork. Some are by people of African descent; others by people of European descent.

The Louvre is the most visited museum in the world. Its permanent collections consist of antiquities from Rome, Etruria (Italy), Greece, the Near East, and Egypt; Islamic art; sculptures; decorative arts; graphic arts (prints and drawings); and, of course, paintings. However, few travelers realize that the Louvre’s collections contain magnificent works that depict Africans and persons of African descent. 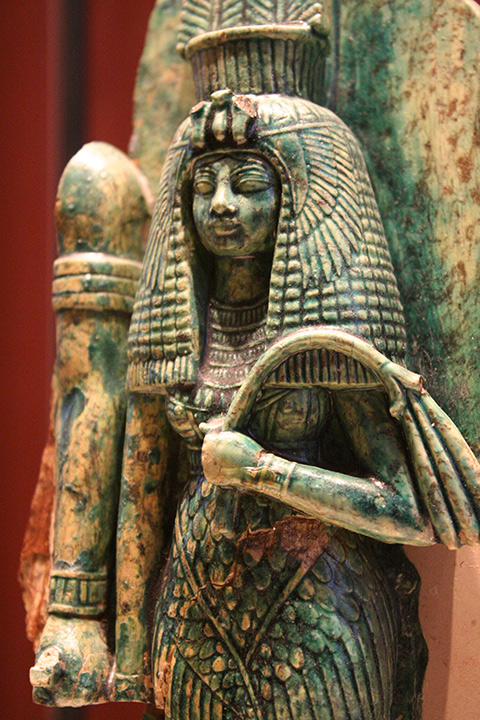 Egyptian antiquities from the Pharaonic period are displayed on the ground and 1st floors of the Sully wing, while oeuvre from the Roman and Coptic periods are found on the ground floor of the Denon wing. Among the works from the Pharaonic period is an exquisite bronze statuette of the black pharaoh Taharqa (25th Dynasty) kneeling before the gilded falcon god Heme. It is found in Room 29 on the first floor of the Sully wing. On the same floor, Room 24 houses a beautiful steatite and enamel statuette of Queen Tiye, wife of Amenhotep III (18th Dynasty) and grandmother of Tutankhamun, more popularly known as King Tut. Many Egyptologists believe that Tiye was of Nubian origin.

A small display of artifacts from the kingdoms of Napata (the land from which the Nubian pharaohs of the 25th Egyptian Dynasty came) and Meroë, in what is now Sudan, can be found on the first floor landing of the Sully wing between Rooms 26 and 27. A fine, life-sized carving of a Nubian woman is featured here.

The Louvre owns a striking Grecian aryballos (a jar used for transporting perfumed oils) that portrays the face of a black person on one side and a white woman on the other. Dating from 520-510 BC, it is displayed in the Galerie Campana IV of the Sully wing, in Room 43. This object was the focus of a conference on Greek women in 5th century BC Athens that took place during Toni Morrison’s program at the Louvre entitled Etranger Chez Soi (The Foreigner’s Home). On the shelf next to it is a wine jug from the same period that depicts the head of a black man. A third item of interest in this room is a white alabaster vase dating from 480-470 BC, which shows a drawing of a black warrior. His outstretched arms bear weapons – a bow in one hand and an ax in the other. This vase is part of a group of approximately forty vases called the Group of the Negro Alabastra; other examples from this group can be viewed at the Harvard University Art Museums, the Museum of Fine Arts in Boston, and the British Museum in London.

The Louvre’s graphic arts collection is little known because its many of its works are fragile and therefore not on permanent display. However, persons wishing to view one or more pieces of the collection can arrange in advance to see them in private. From an Afro-centric perspective, the most interesting work may well be Eight Studies of Heads (ca. 1715-1716) by Jean-Antoine Watteau. Three of the heads are of young black men. Watteau used two of the three in subsequent paintings. His Three Studies of the Head of a Young Black (1715), also known as Three Negro Boys, is part of the Louvre’s graphic arts collection as well. The head on the right in this study is represented in Watteau’s The Music Party at the Wallace Collection in London. These chalk-and-graphite-on-paper drawings portray the subjects with sensitivity unclouded by stereotypical notions. 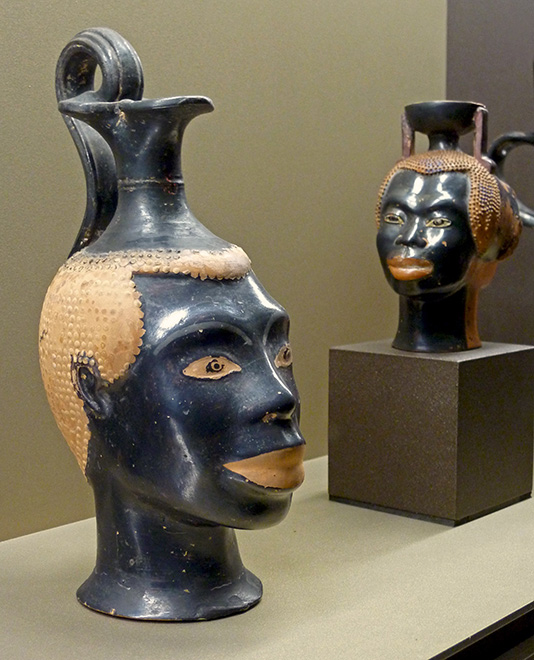 In contrast to Watteau’s drawings, which were made in preparation for paintings, Jean-Auguste-Dominique Ingres created the sketch of his Odalisque with a Slave (1858) after he created both versions of the painting of the same name. Though the sketch is at the Louvre, the original painting (1839) is at the Fogg Museum in Cambridge, Massachusetts, and the second version (1842) is at the Walters Art Gallery in Baltimore, Maryland. Ingres drew a series of preparatory studies for the two women in the foreground of this work, but no such drawings are known to exist for the black eunuch in the background.

The lion’s share of European works that depict black images at the Louvre are found in paintings. Artists from the Northern schools (Flemish, Dutch, Scandinavian), Italy, and France all represented blacks on canvas. A recurring theme for these works is the Adoration of the Magi, where one of the three kings who visited the Christ Child was represented by a black man to emphasize the global influence of Christianity. Interestingly, many artists chose to give the black king a central position in the painting, while the infant Jesus and mother Mary are positioned to the side. An excellent example of this can be seen in Peter Paul Rubens’ famous Adoration of the Magi (1626-1627, oil on canvas) in Room 17 of the Richelieu wing.

Guerrier Noir at The Louvre

Raft of the Medusa by Théodore Géricault (1819, oil on canvas) was the focal point of Toni Morrison’s inaugural conference for a six-week, multidisciplinary program called Etranger Chez Soi, held in November and December 2006. This painting was also the backdrop for an improvisational slam poetry session on one evening during the event. It is located among the many oversized Romanticist paintings in Room 77 on the first floor of the Denon wing.

The scene that Géricault depicts in Raft of the Medusa was inspired by the tragic story of the shipwreck of the French ship La Méduse in 1816, and the abandonment of the lower ranked crew and passengers by the ship’s captain and senior officers. Though the name of only one black was found in the list of survivors (Jean-Charles, black soldier), and a written account of the affair mentions a black man only in the context of being responsible for throwing the dead and dying overboard to lighten the raft on which the abandoned men were floating, Géricault chose to represent three blacks in this work. The one at the pinnacle of the pyramid, frantically waving toward a ship on the horizon, represents hope. Géricault took particular care in developing his rendition of this man, making an oil study of him in addition to the usual preparatory pen and ink sketches that artists commonly used to create their compositions.

Two additional paintings in Room 77 depict black individuals: The Women of Algiers in their Apartment and The Death of Sardanapalus. Both are works by Eugène Delacroix, one of many painters of the 19th century who was deeply influenced by Orientalism – a fascination with the colors, and the real and imagined culture of North Africa.

Delacroix painted The Death of Sardanapalus (1827, oil on canvas) prior to his first visit to North Africa, while Women of Algiers (1834, oil on canvas) was inspired by sketches that he made during his first visit to Morocco, Andalusia, and Algeria in 1832. He apparently added the figure of the black woman at the far right of Women of Algiers as an afterthought; the only known sketch of her was made from a model who posed for him in his studio in Paris. Studies for both of these paintings, including a sketch of the black slave in The Death of Sardanapalus, are found in the graphic arts collection at the Louvre.

Perhaps the single, most striking portrayal of a person of African descent in a painting at the Louvre is Marie-Guilhelmine Benoist’s Portrait of a Negress (1800, oil on canvas), found in Room 54 of the Sully wing. Its subject is a domestic brought from the French Caribbean to France by the artist’s brother-in-law. Painted during the first period of emancipation in France (emancipation in 1794, reinstatement of slavery in 1802), Benoist may have been inspired by prints of the era that touted the freedom of France’s former slaves. Interpretations of the subject’s expression and demeanor range from sadness (perhaps due to having been taken from her home in the islands) to poise and self confidence (due to her newly obtained status of equality). 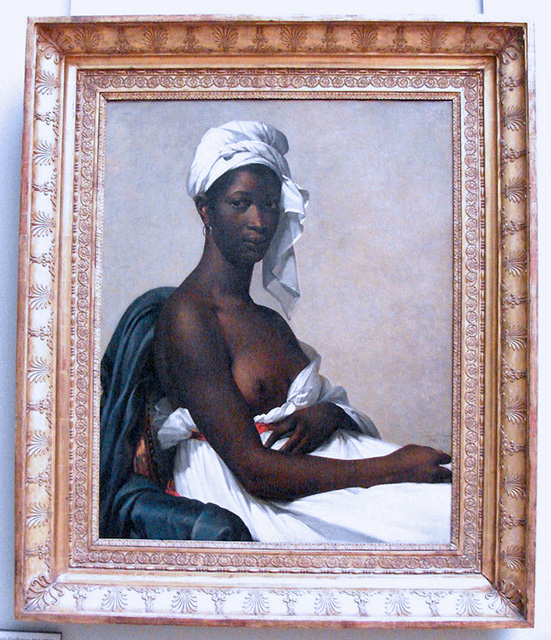 Portrait of a Negress by Marie-Guilhelmine Benoist at The Louvre; credit: Discover Paris!

Other works in which blacks are depicted in paintings at the Louvre include Veronese’s The Wedding at Cana (1562-1563, oil on canvas), Le Sueur’s The Sermon of Saint Paul at Ephesus (1649, oil on canvas), and Coypel’s Young Black Holding a Basket of Fruit and Young Woman Caressing a Dog (1682, oil on canvas).

The Louvre also houses part of the Musée du Quai Branly’s collection of art and artifacts from Africa, Asia, Oceania, and the Americas.These works are found in the Pavillon des Sessions of the Denon wing.