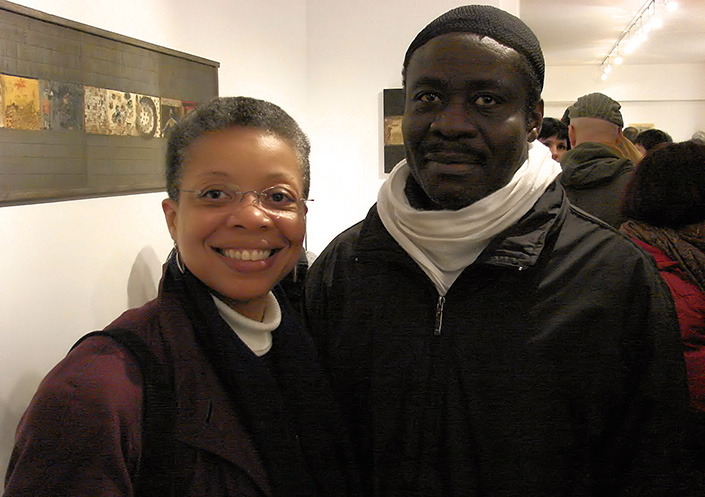 Monique Wells, founder of Discover Paris!, has lived in Paris with her husband, Tom Reeves since 1992. She was named Black Culture & Heritage VIP in Paris. She has authored several wonderful books and itineraries, including Paris Reflections: Walks Through African American Paris and the Black Pearl Walk. Tom is the author of Paris Insights-An Anthology and the Paris Insights blog. He is co-owner of Discover Paris! Enjoy Monique’s insights on African Diaspora Art of Paris.

Paris is well known for its museums and art galleries, with genres ranging from classical to contemporary. It is a place where African art and imagery had a profound influence on Western artistic expression, particularly in the Paris-born Fauvist and Cubist movements that signaled the transition from traditional to modern art. It is also a place where African-American artists have found inspiration for over 100 years.

Paris remains a city where both ancient and contemporary African oeuvres are readily available for viewing and for purchase. The Musée Dapper has presented expositions of African art since 1986. It is the first museum in France that is entirely dedicated to ancient and contemporary art from Africa, the Caribbean and their Diasporas. The Dapper organizes one to two exhibits of ancient sculpture and artifacts per year, accompanied by a satellite exposition of contemporary art (photography, painting or sculpture). The museum also has a café-restaurant, bookstore, and theater.

The Musée du quai Branly is the other major museum in Paris where one can view ancient African art. Built at the behest of French president, Jacques Chirac, its mission is to highlight the art and civilizations of Africa, Asia, Oceania and the Americas. The permanent exposition consists of 3600 works. Many of the large cubes that protrude from the façade of the building contain exhibits devoted to Africa. Among the more than 250,000 artifacts in its catalog, the African collection numbers 70,205. Part of the quai Branly collection is housed in the Pavillon des Sessions at the Louvre. 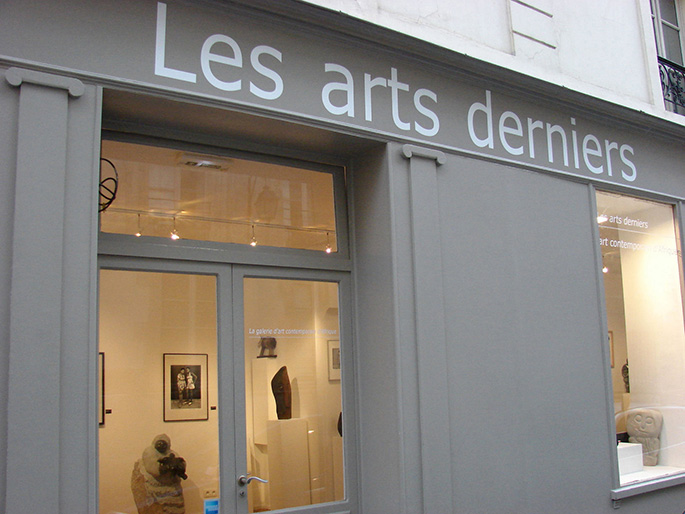 A large number of antiquities dealers and galleries sell tribal art and antiquities on the rue Guénégaud and neighboring streets in the 6th arrondissement. Among them are AEthiopia (23, rue Guénégaud) and Noir d’Ivoire (18, rue Guénégaud). Each September, an art show called Kaos, Parcours du Monde features these works. Christie’s Education Paris was a participant in the 2006 event, presenting lectures on how to become a collector of tribal art.

Contemporary African artists abound in Paris, but venues that exhibit their works are few. Les Arts Derniers is the only professional gallery that is exclusively devoted to promoting these artists. Formerly located in a large space in the 15th arrondissement, it has recently relocated to a smaller, but more strategic, location in the Marais. Owner Olivier Sultan moved his gallery here to take advantage of the proximity of other contemporary art galleries and maximize exposure for his artists. Sultan chose the name “Les Arts Derniers” (literally “the latest arts”) for his gallery in direct opposition to the term “arts premiers”, a euphemism for “primitive arts”. His mission is to dispel the notion that African art is something to be considered apart from art created by non-Blacks, and to have his artists’ works viewed and critiqued on equal footing with European artists.

Ernest Dükü is one of the artists who has exhibited at Sultan’s gallery. A native of Côte d’Ivoire, he moved to France in 1982. His art is a unique mix of painting and sculpture that has roots in his formal education as an architect. He takes inspiration from the art forms of ancient Egypt as well as Akan tribal symbols from his homeland, delving into the esthetics and the spirituality of the two cultures. By contemplating the convergence of the symbol-based writing represented by Egyptian hieroglyphs and the geometric, zoomorphic and anthropomorphic forms of the weights used by the Akans to measure the value of gold dust throughout the centuries, he examines the Akan world through “Egyptian eyes”.

Dükü exhibits his work in France and in Africa. He was awarded a gold medal at the Arts-Inter exposition in Aix-en-Provence. He presented his work at the Biennial of Visual Arts in Douala, Cameroon. 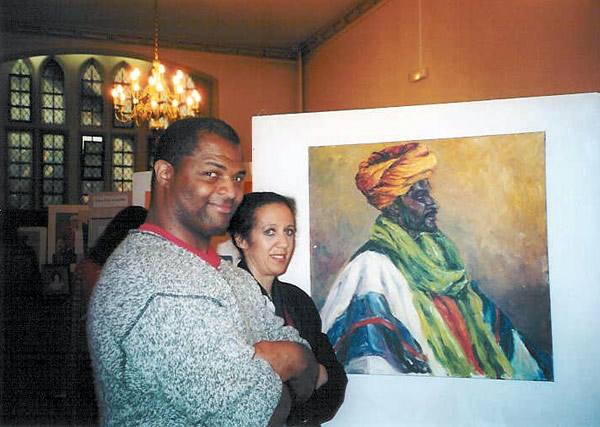 Turning to African-American art in Paris, several works by Henry O. Tanner are on reserve at the Musée d’Orsay. Unfortunately, they are rarely on display. Tanner is the forbearer of many African-American artists who sought their muse in Paris, from the early 20th century to the present day.

Joe Johnson is one of several contemporary African-American artists living in Paris. A student of fine arts and graphic design in the early 1980s, he turned away from this pursuit to explore other avenues of life for several years. In 1998, he returned wholeheartedly to the arts and began a fulltime career as a painter/sculptor. He resumed his studies at Parsons Paris School of Design in Paris, receiving a Bachelor of Fine Arts in 2002.

Johnson is a keen observer of the cultural melting pot that is Paris. He has observed the scarred and tattooed faces of West Africans, the painted faces of Sri Lankans and Indians celebrating Hindu festivals, and the veils worn by women of North Africa, all in the City of Light. Inspired by this rich cultural diversity, he explores the concept of identity by painting portraits of persons of different ethnic groups. His works can be viewed at his studio by appointment.

Ealy Mays knew that he wanted to be an artist from the age of 3. He describes himself as a Global Contemporary Artist, saying that leaving the United States has freed him from the constraints that American convention places on the African-American artist. He made Paris his base of operations 10 years ago and currently has a studio on rue Christine in the 6th arrondissement.

Mays is a prolific painter; he has produced series as varied as “Blue Watermelon”, “Wishbone”, “Space” and “Metro”. His most recent series is “Submarine”, which includes works entitled U.S.S. Aunt Jemima and U.S.S. African American Submerged. One always finds elements of social commentary in his oeuvres, even if they not immediately apparent. He frequently exhibits at a neighborhood watering hole called Bob Cool, where he sometimes joins African-American bartender Patrick behind the bar to serve customers and regale them with stories about his West Texas heritage. If Mays is not at the bar, which is only a half-block from his studio, then Patrick is certain to be able to tell you of his whereabouts. 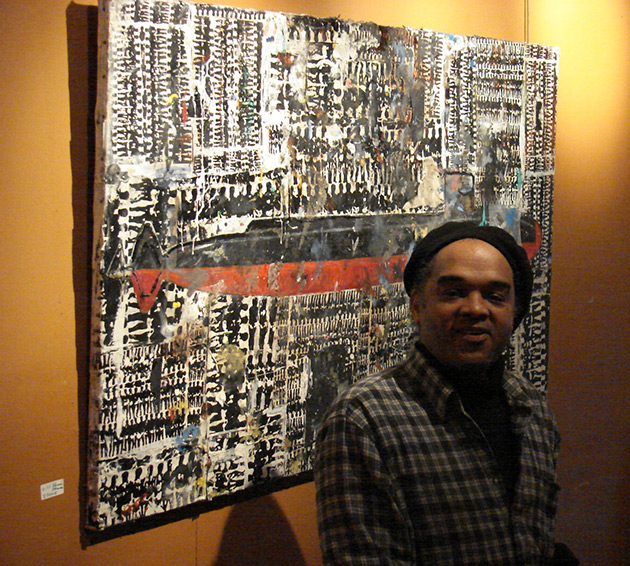 African-American photographers are less common in Paris, but are represented nonetheless. Kim Powell can be counted as one of the few. Photography has been her passion since she was 8 years old, when she received her first camera as a birthday present. She began to seriously study the art when she arrived in Paris almost 17 years ago, taking courses at Parsons School of Design, the Paris Photographic Institute (SPEOS), and the International Center of Photography in New York.

Powell is a commercial photographer as well as an artist. She photographed Paris’ flea markets for the book entitled Bit by the Fleas, and captured images of the Balenciaga gowns worn by Mona Bismarck for an exhibit entitled Perfection Partagée at the Mona Bismarck Foundation in Paris. She frequently exhibits at shows sponsored by the Association of American Wives of Europeans. One of her unique artistic photographic series is entitled Beach Trash, inspired by a bright blue plastic bag that she saw while walking on the beach one day.