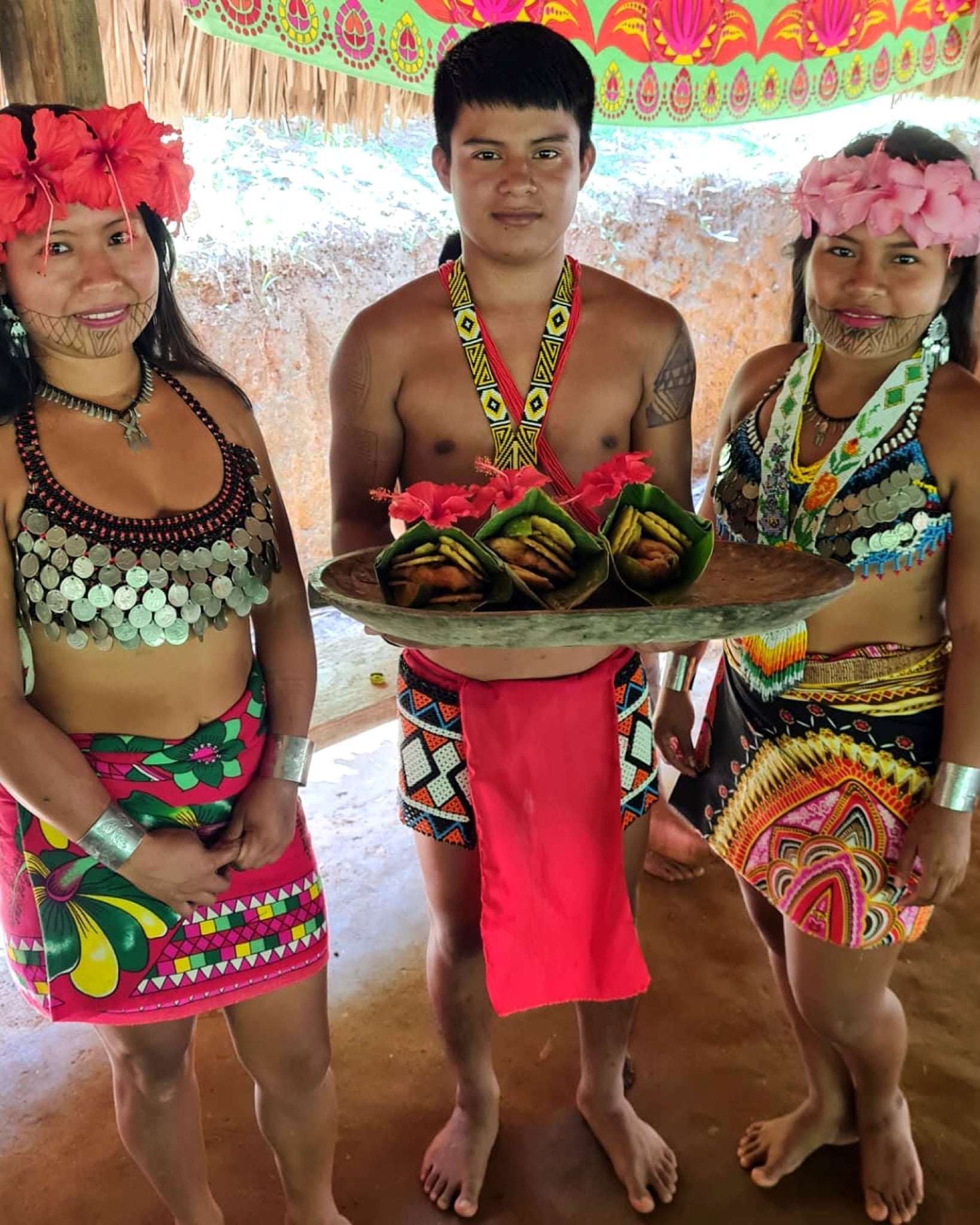 Panama was home to some of the first pottery-making in the Americas, which date back to 2500–1700 BC. The monumental sculptures at the Barriles site are also important traces of these ancient isthmian cultures. Before Europeans arrived Panama was widely settled by Chibchan, Chocoan, and Cueva peoples. The largest group was the Cueva. The size of the indigenous population of the isthmus at the time of European colonization is uncertain. Estimates range around 200,000.

When Panama was colonized, the indigenous peoples fled into the forest and nearby islands. Scholars believe that infectious disease was the primary cause of their population decline. The indigenous peoples had no acquired immunity to diseases such as smallpox which had been chronic in Eurasian populations for centuries.

Rodrigo de Bastidas sailed westward from Venezuela in 1501 in search of gold and became the first European to explore the isthmus of Panama. A year later, Christopher Columbus visited the isthmus. Vasco Núñez de Balboa’s from the Atlantic to the Pacific in 1513 demonstrated that the isthmus was indeed the path between the seas, and Panama quickly became the crossroads and marketplace of Spain’s empire in the New World.

In 1514, Spanish King Ferdinand II assigned Pedro Arias Dávila as Royal Governor of Panama. In 1519, Dávila founded Panama City. Gold and silver were brought by ship from South America, hauled across the isthmus, and loaded aboard ships for Spain. The route became known as the Camino Real, or Royal Road.

Though Panama remained under Spanish rule from 1514–1821, Spanish authorities had little control over much of the territory of Panama. Indigenous people resisted Spanish attempts to conquer them or missionize them. However, Panama was enormously important to Spain strategically because it was the easiest way to transship silver mined from Peru to Europe. Silver cargoes were landed in Panama and then taken overland to Portobello or Nombre de Dios on the Caribbean side of the isthmus for shipment.

Because of incomplete Spanish control, the Panama route was vulnerable to attack from pirates, and from “new world” Africans called cimarrons who had freed themselves from enslavement and lived in communes or palenques around the Camino Real and on some of the islands off Panama’s Pacific coast. One such famous community amounted to a small kingdom under Bayano, which emerged from 1552 to 1558.

Sir Francis Drake’s raids on Panama in 1572–73 were aided by Panama cimarrons. Spanish authorities had to make an alliance with them that guaranteed their freedom in exchange for military support in 1582.

In 1671, the privateer Henry Morgan sacked and burned the city of Panama, which was the second most important city in the Spanish New World.

In 1744, Bishop Francisco Javier de Luna Victoria DeCastro established the College of San Ignacio de Loyola in 1749. By this time, however, Panama’s importance and influence had become insignificant as Spain’s power dwindled in Europe.

As the Spanish American wars of independence were heating up all across Latin America, Panama City was preparing for independence; however, their plans were accelerated by the unilateral Grito de La Villa de Los Santos (Cry From the Town of Saints), issued on November 10, 1821, by the residents of Azuero without backing from Panama City to declare their separation from the Spanish Empire. In both Veraguas and the capital this act was met with disdain, although on differing levels. To Veraguas, it was the ultimate act of treason, while to the capital, it was seen as inefficient and irregular, and furthermore forced them to accelerate their plans.

Since 1821, Fábrega convened every organization in the capital with separatist interests and formally declared the city’s support for independence. No military repercussions occurred because of bribing of royalist troops. In the 80 years following independence from Spain, Panama was a subdivision of Gran Colombia, after voluntarily joining the country at the end of 1821.

The U.S. government, working with separatists in Panama, engineered a Panamanian declaration of independence from Colombia, then sent warships and marines to Panama. 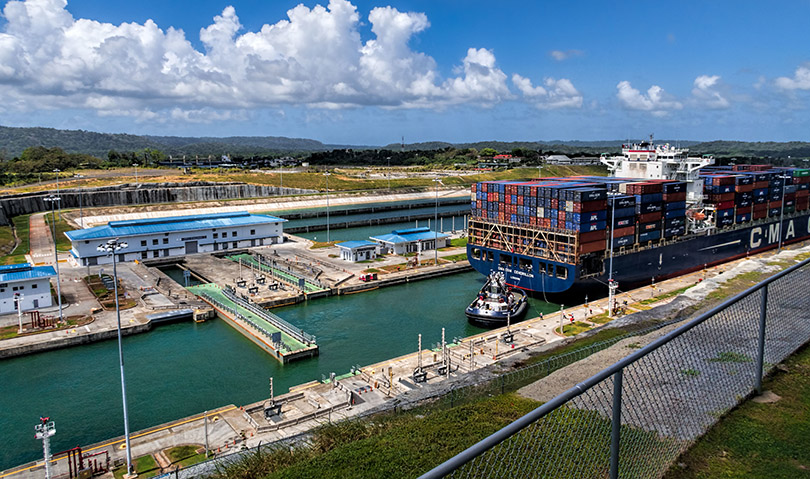 The U.S. intent to influence the Panama Canal’s construction led to the separation of Panama from Colombia in 1903. When the Senate of Colombia rejected a treaty on January 1903, the United States decided to support the Panamanian separatist movement. In November 1903 Panama proclaimed its independence and entered a treaty with the United States without the presence of a single Panamanian. The treaty granted the United States rights to govern a Panama zone roughly 10 miles wide and 50 miles long. In that zone, the U.S. would build a canal, then administer and fortify it in perpetuity.

From 1903 to 1968, Panama was a constitutional democracy dominated by a commercially-oriented oligarchy. But during the 1950s, the Panamanian military began to challenge the oligarchy’s political hegemony. The early 1960s saw also the beginning of sustained pressure in Panama for the renegotiation of the Hay–Bunau-Varilla Treaty, including riots that broke out in early 1964, resulting in widespread looting and dozens of deaths, and the evacuation of the American embassy.

The constitution was changed in 1972 and enabled the military to create the Assembly of Corregimiento Representatives, which replaced the National Assembly. The new assembly, also known as the Poder Popular (Power of the People), was composed of 505 members selected by the military with no participation from political parties, which the military had eliminated. In 1981, President Torrijos died in a plane crash which altered Panama’s political evolution.

Despite the 1983 constitutional amendments which proscribed a political role for the military, the Panama Defense Force (PDF), as they were then known, continued to dominate Panamanian political life. Meanwhile, General Noriega’s regime had fostered a well-hidden criminal economy that operated as a parallel source of income for the military and their allies, providing revenues from drugs and money laundering. Toward the end of the military dictatorship, a new wave of Chinese migrants arrived on the isthmus.

His military dictatorship assassinated or tortured more than one hundred Panamanians and forced at least a hundred more dissidents into exile. Noriega’s regime was supported by the United States and it began playing a double role in Central America. Noriega supplied Nicaraguan Contras and other guerrillas in the region with weapons and ammunition on behalf of the CIA.

In 1987, the retired Colonel Roberto Díaz Herrera denounced the regime. He revealed details of electoral fraud, accused Noriega of planning Torrijos’s death, and declared that Torrijos had received 12 million dollars from the Shah of Iran for giving the exiled Iranian leader asylum.

President Ronald Reagan began a series of sanctions against the military regime. The United States froze economic and military assistance to Panama in the middle of 1987 in response to the domestic political crisis in Panama and an attack on the US embassy. The sanctions failed to oust Noriega, but severely hurt Panama’s economy. Panama’s economy declined.

In February 1988, General Noriega was accused of drug trafficking by federal juries in Tampa and Miami. In April 1988, President Reagan invoked the International Emergency Economic Powers Act, freezing Panamanian government assets in all U.S. organizations. In May 1989 Panamanians voted overwhelmingly for the anti-Noriega candidates. The Noriega regime promptly annulled the election and embarked on a new round of repression.

The United States invaded Panama in December 1989 to “safeguard the lives of U.S. citizens in Panama, defend democracy and human rights, combat drug trafficking, and secure the neutrality of the Panama Canal”. The estimates for civilians killed in the conflict range from 200 to 4,000. In December 1989, Noriega was captured and flown to Miami to be tried and convicted. The most heavily affected district was the El Chorrillo area of Panama City, where several blocks of apartments were completely destroyed.

Though imperfect and gentrification is a challenge today, some good came from U.S. intervention. Panama leveraged the canal to transform itself into a financial & corporate hub for Latin America. Panama City has nearly 100 local and international banks. Balladares was sworn in as a democratically-elected president in 1994 and the country remains self-governed.

In 1999, Mireya Moscoso, the widow of former President Arnulfo Arias Madrid, took office after defeating PRD candidate Martín Torrijos. During her administration, Moscoso attempted to strengthen social programs, especially for child and youth development, protection, and general welfare. Moscoso’s administration successfully handled the Panama Canal transfer and was effective in the administration of the Canal.