You are here: Home1 / International2 / Olinda 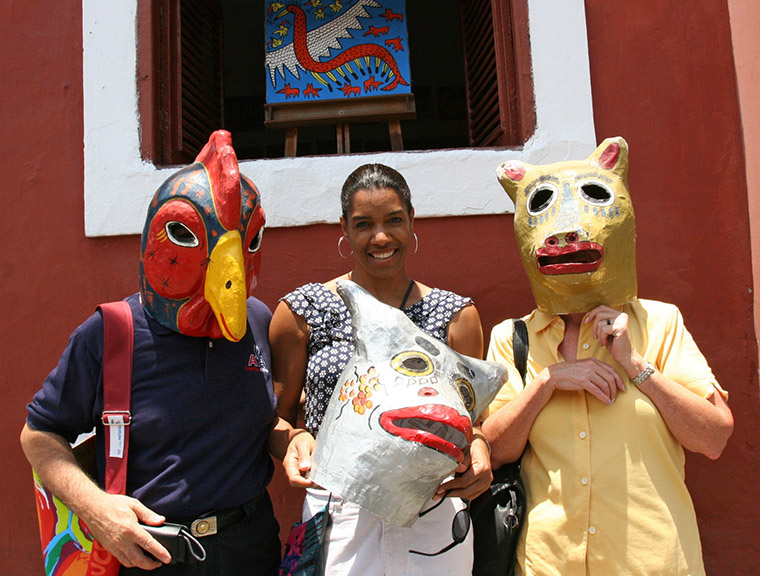 After walking up a steep, cobble-stoned street to the crest of a hill overlooking Olinda, I gaze below and involuntarily exclaim, “Oh. Wow.”

I learn that the city got its name when its founder, Duarte Coelho Pereira, first saw this exact view and expressed a similar sentiment in his native tongue. “Linda” means beautiful in Portuguese, an apt description for what lay at my feet.

The Atlantic’s indigo surface is fading to pale blue near the crescent coastline. Palm trees fringe the shoreline, their fronds swaying in the ocean breeze. Rich vegetation sprouts among houses covered in red tiles, and bushy Mangabeira and Pau Brazil trees fill in the lush setting. Wisps of white clouds hang overhead.

It’s an arresting sight. But as picturesque as Olinda looks from this hillside, it is even more striking up close. 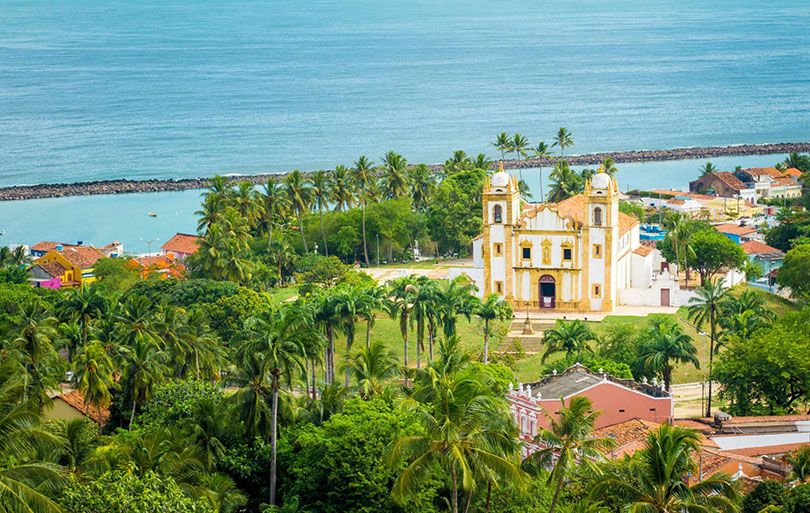 Ancient church near the beach in Olinda; credit Brazil Tourism

Many of these dwellings are ateliers (art studios and galleries) that offer an all-you-can-consume smorgasbord of styles, media, color, and aesthetics. More than 120 in number, they represent the twin charms of Olinda – historical authenticity and devotion to the arts.

UNESCO has declared Olinda’s historic center a World Heritage Site because the city is so fervently dedicated to preserving its past. The ateliers – with their arched windows, iron balconies, fancy white trim, and colorful facades – are examples of that dedication; they look as if they’ve been transported from the 1600s.

We tour one such renovated space, Estacao Quatro Cantos, housed in a two-story coral building. The heavy wooden doors, crafted from the original structure’s oak ceilings, open onto a bright showroom. Here, we get a glimpse of Olinda’s other charm – its art and cultural scene. 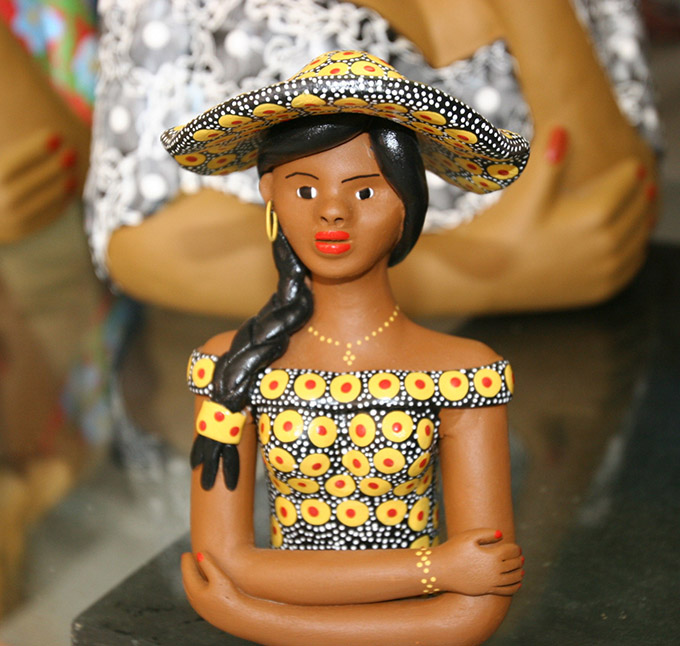 Watercolors, acrylics, abstracts, and still-lifes cover the walls, and ceramic pottery, small sculptures, and stands carrying beaded jewelry sits on display tables. The back patio serves as a café where you can grab a cup of gourmet coffee while admiring what can only be described as a hanging garden of oversized porcelain teardrops.

I come across the intertwining of history and art often. For example, a brilliant, elaborate mural of Maracatu – the embodiment of the African spirit – is painstakingly painted on the wall of a building erected centuries ago.

Works by Brazilian artists such as Vila Nova decorate the lobby of Pousada do Amparo, a hotel whose quaint rooms and rustic kitchen harken back to Olinda’s early years. The owner, Bento Campelo, provides my favorite quote about the city’s cultural push: “Olinda is pressing art deep into the souls of ordinary people.”

The Mayor’s expansive office is set in a colonial building whose cornflower blue walls exhibit numerous pieces of art. A collection of paintings by Olinda Artist Bajado depict Carnival dancers and religious rites in prominent colors of red, blue, and black.
Mayor Calheiros tells us that Olinda is known as Brazil’s First Capital of Culture. “We have a rich, intense sense of culture,” he says, citing “Olinda, Arte em Toda Parte” as one demonstration of the fact

Translated as “Olinda Art is Everywhere,” this annual November festival features concerts, dance performances, video showings, poetry readings, and of course, art. True to the event’s name, artwork can be found in bars, restaurants, hotels, inns, museums, and churches in addition to the ateliers.

And art can also be found in many boutiques and shops, such as Artes do Imaginario Brasileiro, which offers a vast array of paintings, sculptures, statues, masks, and clothing. A shopping break comes in handy because Olinda is blanketed across seven hills and strolling its streets can give you a workout.

Emporio do Carnival is an unusual retail outlet because it sells primarily the colossal puppet costumes that partiers wear during Carnival. Step inside, and you’re dwarfed by wall-to-wall dolls, clowns, and what look like storybook characters.

Just like celebrations in Rio and Salvador, party-goers from around the world take to the streets of Olinda in a mass of fanciful, colorful humanity. But unlike the others, this city’s Carnival is free, and everyone participates. More than a million celebrants attend. 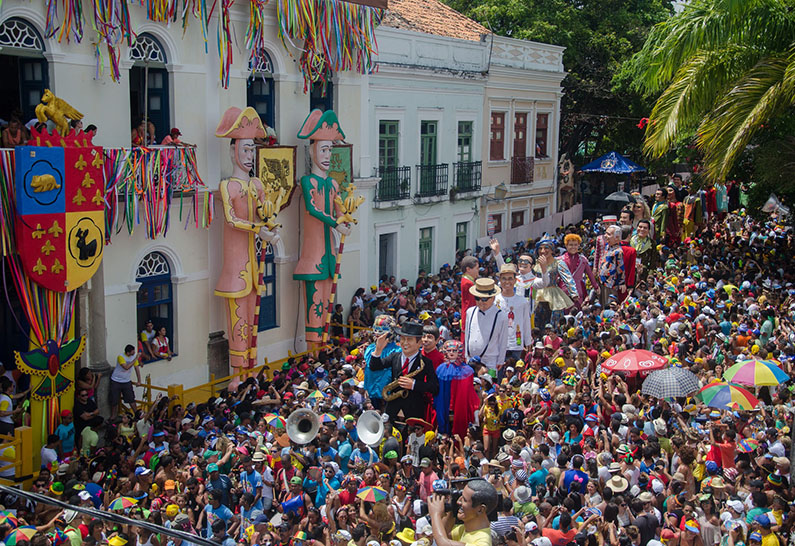 Pernambuco Carnival celebrations will blast Frevo music, which has its origins in the African-Brazilian martial art Capoeira. It’s characterized by a feverish rhythm played by brass bands. Dancers gyrate, leap and twist while twirling colored parasols.

Frevo is just one example of the African influence in Pernambuco, where many say the culture of the Motherland is more pervasive than in other parts of Brazil. I notice the touch of Africa throughout Olinda. The Church of the Rosary of Black Men was built by slaves who were forbidden to worship with whites. They hosted their own religious gatherings called “Congos” here.

And, the curves of Olinda’s ubiquitous red roof tiles were made from slaves shaping the pre-hardened, unmolded clay across their thighs.

I see a life-sized black-as-night rag doll wearing a dress of purple flowers sitting in the window of a lavender gift shop called Portal dap Artep. Her skin tone is at one end of a spectrum of complexions I notice; as in the rest of the country, Olinda is home to sisters and brothers of every skin color imaginable – from light cream to smooth obsidian.

On more than one occasion, I hear that Pernambuco is closer to West Africa’s Senegal, 2,000 miles away than it is to Southern Brazil. 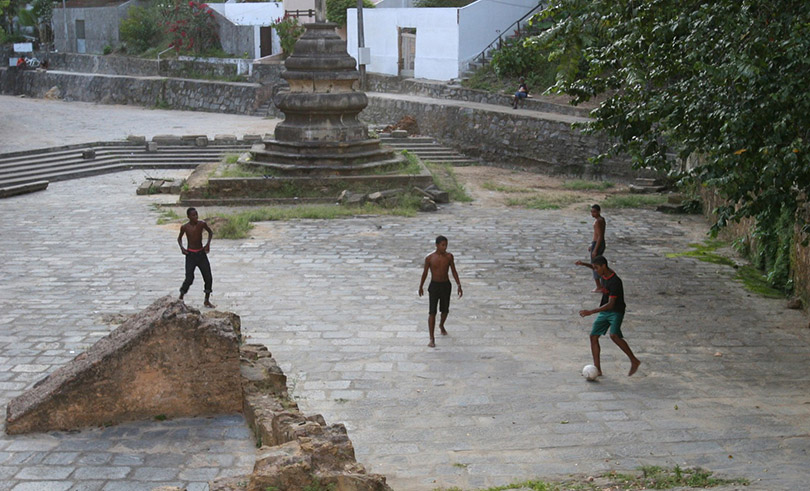 Playing street soccer in the ancient ruins of Olinda; (c) Soul Of America

Other sites to see in Olinda include Riberia Market with its abundance of artwork and handicrafts; the Museum of Contemporary Art, showcasing many artists from all over the world; and the Church of St. Savior of the World, Alto da Se. Located at the highest point in the city, the church is steps away from the view that evoked my initial awe of this city. Seeing Olinda from this perspective makes you fully appreciate how it got its name.

The restaurants and hotels (pousadas) to consider when planning a visit to Olinda include:

From the street, you descend steep and rocky stairs. The faint of heart can take a glass elevator down into what likes like a forest before entering the quaint dark-wood dining room of Beijupira. A glass wall, framed by more trees, overlooks Olinda, providing an eye-catching view of red-tiled roofs, abundant vegetation, and the glistening Atlantic Ocean.

The treehouse-evoking restaurant takes its name very seriously: All fish on the menu is Beijupira, a warm-water fish once strictly reserved for royalty. This is early in my trip when I foolishly thought I didn’t like fish, so I order the Honey Shrimp with Papaya Rice, which is excellent.

As with many restaurants and hotels in Olinda, eating in Maison do Bomfim is like dining in an art gallery. The brightly lit restaurant specializes in French cuisine, and I order a usual combination – steak in a blue cheese sauce. It was delicious. In its “Best of Recife Guide,” the Brazilian news and feature magazine Vejá listed Maison do Bonfim as serving the “Best French Food” in the area.