Mexican vacations usually conjure images of jet setters reclining on hot sands by day and burning up salsa dance floors by night. But a more culturally significant travel experience awaits in the City of Oaxaca. Lovers of history churches, cultural centers and vibrant marketplaces will find an embarrassment of riches in this sprawling city laid at the feet of the Sierra Madre Mountains in southern Mexico. — Jeanette Valentine, Soul Of America

Oaxaca’s charms are many, not the least among them the architectural marvels of its churches and convents. Perhaps the most visually alluring of the former is La Iglesia de Santo Domingo de Guzman. From a distance, its baroque façade appears to rise from an expansive bed of agave plants, the sword-leafed cactus from which tequila is made. It’s a fanciful first glimpse of the 16th-century church, whose interior walls feature intricate carvings and metal work in a dazzling display that seemingly soars to the sky. Not to be missed is the jaw-dropping splendor of the gold-leaf covered alter.

The church sits adjacent to the Santo Domingo de Guzman Cultural Center, a beautiful former convent that houses artifacts culled from the ruins of Monte Alban, one of the world’s oldest stone cities and a World Heritage Site (more on Monte Alban later). Sweeping arches, grand cloisters, roman columns and pristine patios evoke an air of refinement that carries into an interior brimming with history. The Center includes the Oaxaca Cultures Museum and The Friar Francisco de Burgoa Library, which contains books and documents dating back to 1484. Visitors peering through the Culture Center’s windows are treated to the lush, verdant Oaxaca Historical Ethnobotanical Garden. The grounds hold more than 1,300 varieties of plants indigenous to the region. 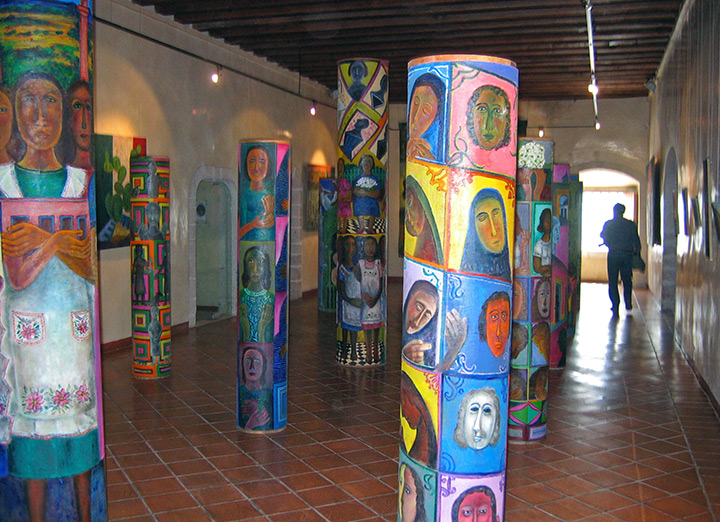 Yet another example of baroque architecture is the Cathedral of Oaxaca, a grand church that anchors the town’s Zocalo, or main square. The entire area bristles with activity no matter the time of day or night. The cobble-stoned plaza comes alive with children chasing one another, vendors hawking souvenirs for tourists, musicians blaring band music and couples strolling hand in hand.

Also a former convent, Santiago Apóstol, can be found in the town of Cuilapam de Guerrero, about six miles south of Oaxaca. On a crystal clear day, the sand-colored stones from which the complex is built contrasts sharply with the reddish hue of two large domes and the brilliant blue of the sky, making for post-card perfect photos. Built in the 16th century, Santiago Apostol’s open-air nave reflects the local preference for outdoor religious services; people considered traditional in-door churches claustrophobic.

In the shadow of the great Cypress is a white confection of a church, trimmed in blue and rust and sitting before a meticulously maintained garden. Playful topiaries – including a squirrel and a sombrero-wearing, troubadour – stand like leafy statues amid the roses. Like most large churches in Mexico, El Templo de Santa María de la Asunción boasts an elaborate, golden alter worth viewing. 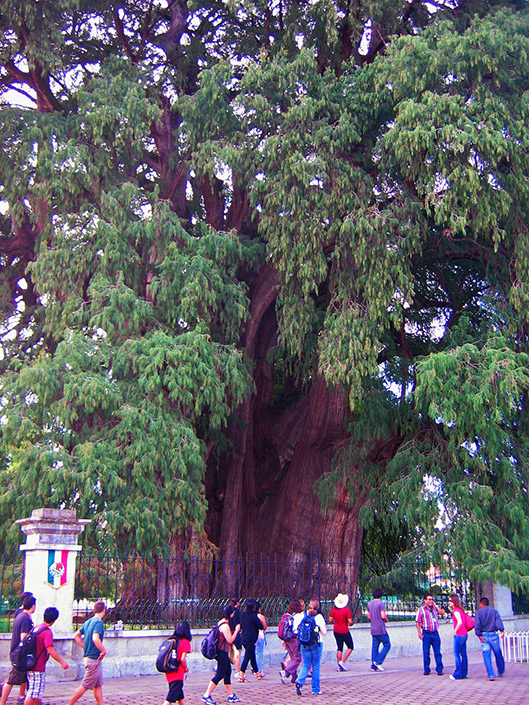 For those who appreciate the liveliness of Mexican mercado, Tiacolula de Matamoros near Oaxaca does not disappoint. Under tarps seeming to stretch for miles, vendor stalls crowd shoulder to shoulder hawking everything from food to artwork to clothes to live animals destined for slaughter.

Pyramids of bread loaves, buckets of grains and spices, displays of leather belts and purses, hats, pots and pans, t-shirts, turkeys and ubiquitous baskets of ruddy-colored fried grasshoppers. It’s all there, along with an array of aromas and sounds that alternately delight and shock the senses: the perfume of flowers, the musty smell of livestock, the hum of a radio blaring Mexican ballads, the loud yelps from sellers to entice prospective customers.

The smoky aroma of barbecuing wafts through the air near the carnerciera, the butcher section where razor-thin flank steaks sizzle over stand-up grills lining the middle aisle. Carcasses of cows and pigs hang in the back of some stalls, with choice cuts of meat displayed on the counters in front of them. One entire row contains nothing but sellers of fried pig skins, the crunchy snack eaten like potato chips. Looking like crispy, golden sheets hung on clothes lines, each skin comes from the hide of one pig and measure yards and yards across.

Frenzied activity in the surrounding market contrasts sharply with the somber interior of the Church of the Martyrs, which sits in its midst. Etched on the wall of the church are vivid and chilling depictions of the death scene of each disciple of Jesus. It’s a place of worship not for the faint of heart. 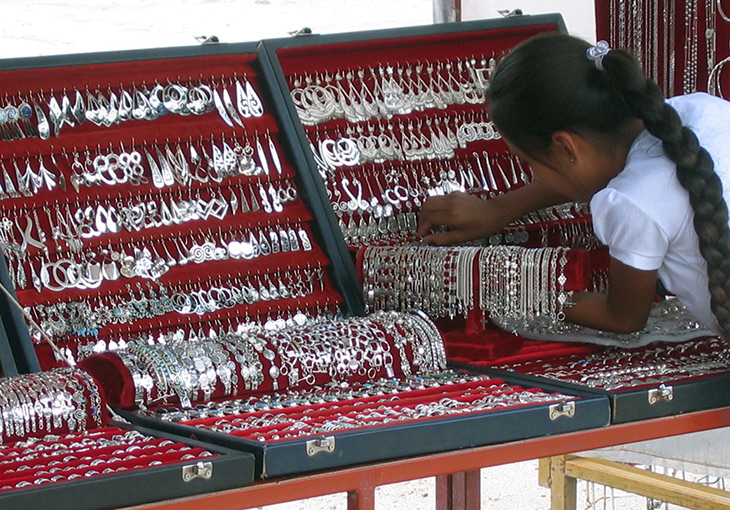 More light-hearted adventures can be found in the villages outside of the city limits, where folk arts and crafts are lovingly created. Each locality claims a particular skill that generations of artisans have past down to their progeny. As a result, individual towns are known for producing a singular art form or craft, including pottery and textiles. Villages worth a visit include: