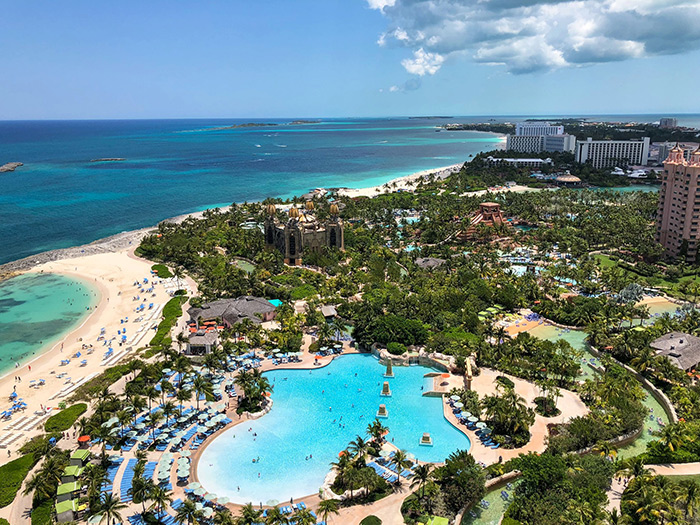 Atlantis
Its as if an alien space ship abducted a billion dollar Las Vegas resort, then parked it in The Bahamas. This multi-story, salmon-colored seaside resort includes Aquaventure, a 141-acre waterscape with a thrilling Mayan Temple water slide, a mile-long river ride with high intensity rapids, wave surges, special effects and Climbers Rush (12 climbing surfaces). Dolphin Cay lets you experience the shallow water antics, speed and agility of dolphins in an extraordinary, 14-acre dolphin habitat. Atlantis Pools & Lazy River Ride satisfy every taste, from the formal splendor of the Royal Baths Pool to the relaxed atmosphere and fun of the River Pool to expansive Kids Pools. Enjoy miles of pristine Beach stretching in both directions from the resort, also Paradise Lagoon offers swimming, sunbathing and a variety of water sports. Last but not least, there’s a world class casino with enough games, artwork and eye-candy to satisfy a Las Vegas ex-patriot.
ADDRESS: Paradise Island
PHONE: 888-528-7155

Prince George Wharf
This is the largest cruise port in the Caribbean, adjacent to downtown Nassau. When you disembark from a cruise ship, you will notice a large straw market for gifts sold by cheerful merchants. What a wonderful way to support the local economy and pick a and colorful hat and other gifts to remind you of a great time in the Bahamas. You can pick up brochures and maps from the Ministry of Tourism Information Centre in Rawson Square.

Parliament Square
The traditional centres of the Government of The Bahamas located in the heart of downtown on Bay Street. As a former British colony, The Bahamas continues the tradition of a parliamentary government composed of a Senate, House of Assembly, Prime Minister, Supreme Court and a Court of Appeals. Changing of the Guard ceremony, held every two weeks, also continues the eye-catching British tradition.
ADDRESS: Bay Street, Downtown Nassau

Queen’s Staircase
Nassau’s most visited attraction. Climb the 66 steps carved of solid limestone by slaves in the late 18th century. The 102-foot staircase is named in honor of the 66 years of Queen Victoria’s reign. Today, a thick canopy of trees surrounds the steps creating a cool area during the hottest days.
ADMISSION: FREE
ADDRESS: next to Fort Fincastle Water Tower

Fort Charlotte
Built in 1789 by Lord Dunmore and named in honor of the wife of King George III, this fort has never fired a shot in battle; includes a water-less moat, drawbridge, ramparts and dungeons. Fort Charlotte commands another fine view of Nassau Harbour. It is easy imagine the commanding outpost it afforded marauding pirates of the day. Tours are conducted Monday-Sunday.
ADMISSION: FREE
ADDRESS: West Bay Street
PHONE: 242-322-7500 Ministry of Tourism or 242-325-9186

The Cloisters
Stroll about the remains of a 14th century French Monastery that was imported, stone by stone, to the United States by the newspaper baron William Randolph Hearst in the 1920s. Forty years later the Cloisters were bought by Huntington Hartford and installed at the top of a hill on Paradise Island overlooking Nassau Harbour. This scenic site is popular for weddings, but planners have to book many months in advance.
ADDRESS: Cloister Road, Paradise Island

Blue Dolphin Cay
Located 3 miles northeast of Nassau, Blue Lagoon Island is home to dolphins and sea lions at Dolphin Encounters. You can swim in a hidden lagoon with clear blue water, snorkel right off the beach and see coral reefs teeming with numerous species of tropical fish, sunbathe on white-sand beaches surrounded by coconut palm trees, and walk through lush natural vegetation that is the habitat for nesting birds. For convenience, purchase a package that includes round-trip boat transfer to Blue Lagoon Island, lunch, free access to the Inflatable Aqua Park, use of the facilities, beach sports and game equipment. Water sports equipment is also available to rent: paddleboards, kayaks, clear bottom kayaks, water bikes, underwater scooters and snorkeling gear. Its a great way to spend the day on one of the top-voted family attractions in the Bahamas. It began in 1989 when two Atlantic Bottlenose dolphins were rescued from an aquarium that closed in Nassau. In 2006, it expanded to include six California Sea Lions that had lost their habitat at Marinelife Oceanarium in Gulfport, Mississippi during Hurricane Katrina. Once again, Dolphin Encounters created a large, all-natural habitat for the rescued five females and one male sea lions. Dolphin Encounters is a member of the prestigious Alliance of Marine Mammal Parks and Aquariums.
ADMISSION: Blue Lagoon Beach Day Package
Adults – $69
Children ages 4-12 – $45
Children ages 3 and under pay for lunch only, if needed
ADDRESS: One Marina Drive, Paradise Island
PHONE: 242-363-1003
WEBSITE: http://www.dolphinencounters.com/blue-lagoon-island/