You are here: Home1 / International2 / Nantes 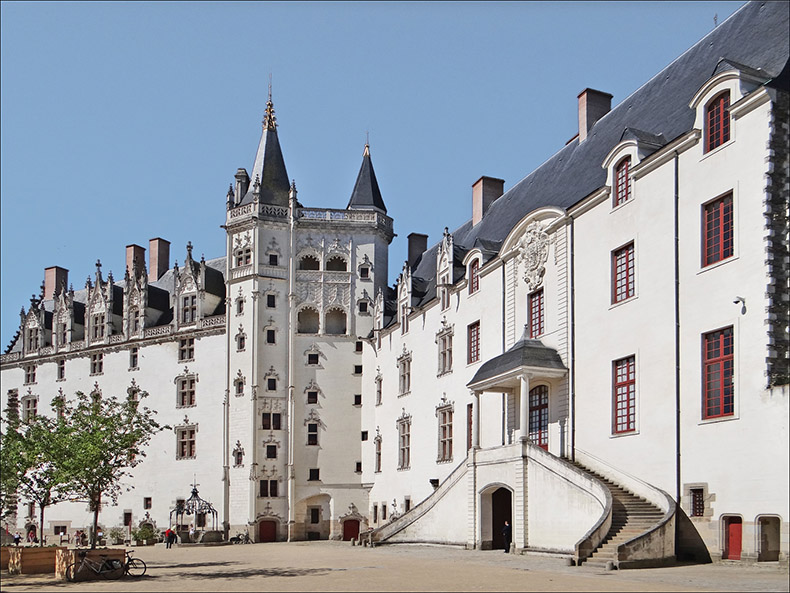 Memorial to the Abolition of Slavery in Nantes is a commemorative reflection on the role that the city played in the slave trade, as well as for calling attention to the plight of the millions of people who live in forced labor today — Monique Wells, Entree to Black Paris

Memorial to the Abolition of Slavery in Nantes, France

From 17th to 19th century, Nantes was a prosperous city due in large part to its participation in the triangular trade, sending the greatest number of French slave ships from its ports to Africa and then to the Americas. The memorial marks a great step in the city’s efforts to acknowledge this horrific past, which was ignored for years, to educate its citizens about it, and to reconcile with it.

Located on the Loire River, Nantes had a booming maritime industry for centuries and profited from its proximity to the Atlantic. Prior to engaging in the slave trade, it opened trade routes to the Far East and the French colonies in North America. 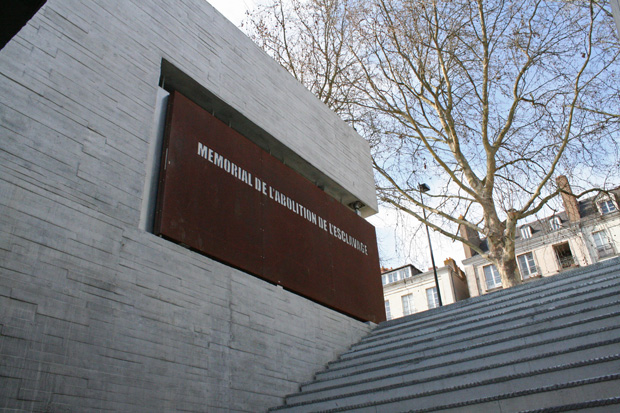 Memorial to the Abolition of Slavery

The project for the memorial was launched in 1998 after the vandalization of a statue that had been erected in honor of the 150th anniversary of the permanent abolition of slavery in France.

Slavery in France was first abolished in 1789, re-established under Napoleon Bonaparte in 1802, and definitively abolished in 1848. The proposal submitted by artist Krzystof Wodiczko and architect Julian Bonder was accepted in 2005, and construction began in 2008.

The memorial consists of two levels along an esplanade measuring 75,350 square feet on quai de la Fosse on the north bank of the Loire River. On the ground level are 2000 transparent plaques embedded in concrete, 1710 of which bear the names of individual ships that left Nantes for the purpose of acquiring slaves and selling them in the French Caribbean.

The other 290 plaques present the names of slave ports in Africa and ports of origin for slave ships in Europe, such as Liverpool, England.

A steep flight of stairs leads to the lower level, which is a long passage under the quay that evokes the hold of a slave ship. Visitors descend the stairs to read proclamations imprinted on glass slabs, including Article 4 of the 1789 Declaration of the Rights of Man: “No one shall be held in slavery or servitude; slavery and the slave trade shall be prohibited in all their forms.”

Other slabs bearing quotations from various official documents and declarations from individuals such as Nelson Mandela, Franz Fanon, and Martin Luther King, Jr. line the passage. Together the slabs of glass form a single unit that protrudes above ground at a 45° angle, representing the historic rupture of the world with the practice of slavery. Words such as “freedom” and “slave” are displayed on these slabs in as many as 48 languages. 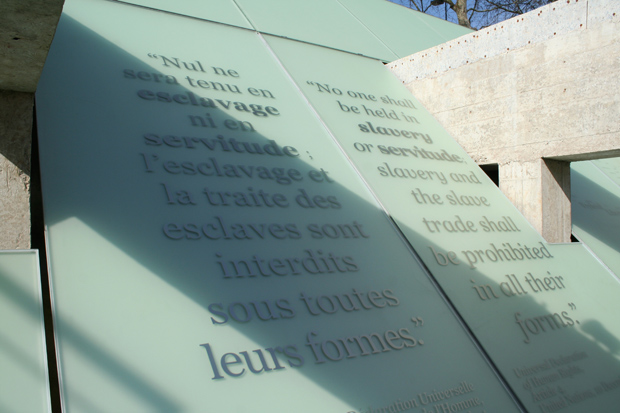 Panel displaying Article 4 of the Declaration of the Rights of Man; © Discover Paris!

At one end of the underground passage, a window looks out onto the Palais de Justice (the municipal court house) that lies across the river. A room in red and black at the other end displays the dates that slavery was abolished in various countries around the world.

The memorial cost at least 6,900,000 Euros to build. It was financed with European, local, and regional funds. The French national government declined to provide financial support for the memorial, even though it is the only one of its kind in Europe.

I strongly recommend a visit the Museum of the History of Nantes prior to visiting the memorial to get a true sense of the significance of the memorial with regard to Nantes’ collective memory about its role in the slave trade. Of the thirty-two rooms there, twelve contain information and artifacts pertaining to the slave trade and seven are completely dedicated to the subject.

The museum is located in the Château des Ducs de Bretagne (Castle of the Dukes of Brittany). 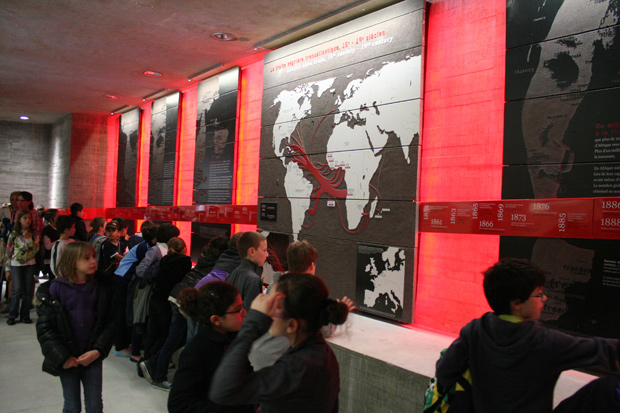 Room presenting Timeline of the Abolition of Slavery; © Discover Paris!

While the memorial is a site for reflection, the museum is a site for education. Several interactive displays present information in multiple languages, including English. Models of slave ships, a miniature sugar plantation, and examples of the implements used to restrain and punish slaves are among the items displayed there.

Prominently displayed historical documents provide important detail about the slave trade. These include bills of sale, illustrations of the cargo hauled on slave ships (including the distribution of slaves in the space between decks), and shipping lists that indicate the number of slaves captured, those allotted as “bonuses” to the captain and crew, those dying during transport, and the final number sold. 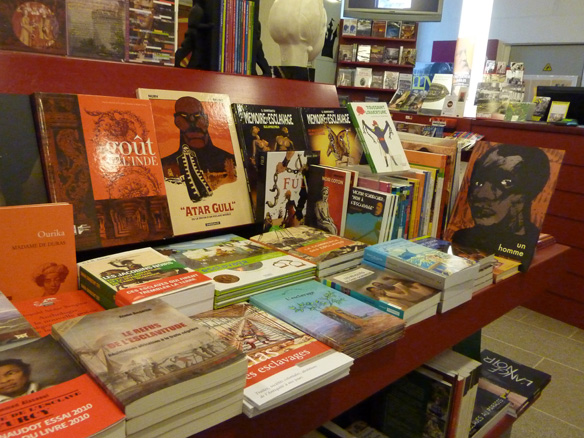 At least one document indicates the length of time (several months) that a ship spent on the western coast of Africa acquiring a full load of cargo prior to setting sale for the Antilles.

One room displays luxury items that successful slavers could hope to acquire through their trade. Porcelain dishes, furniture made of mahogany, and a silver chocolatier (a pot created specifically for serving chocolate) are exhibited here.

In another room, a portrait of a successful slaver, aristocrat Pierre Grégoire de Roulhac, shows him feeding a morsel of sugar to his dogs. This gesture would be equivalent to feeding dogs caviar today.

The slave-trade circuit display in the museum is extremely well presented and could easily take a half-day to explore thoroughly. The museum’s bookstore has an impressive collection of publications on slavery, the slave trade, and related topics. All books are in French.

Along the 1 mile route between the museum and the memorial, the city has erected eleven illustrated panels that present the history of Nantes’ slave trade. Images on these panels are taken from items on permanent display at the museum. A brief English-language translation is provided at the bottom of each panel. 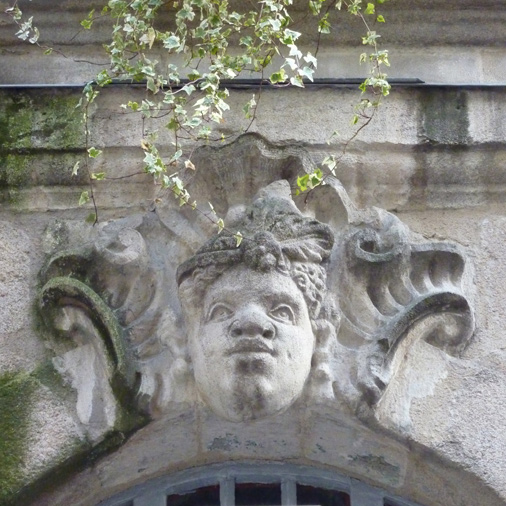 Of particular interest along the route is Ile Feydeau, an area where many successful slave traders purchased property for their sumptuous personal residences. It’s also where many merchants sold merchandise made from raw materials brought back from the French Antilles during the third leg of slave trading voyages.

Several buildings on this small stretch of land are adorned with mascarons – stone carvings that depict the faces of persons from foreign lands (including Africa), representations of the Greek god of Sea, Neptune, and likenesses of owners and their families. A panel that presents a brief history of the merchants stands on the south side of the island.

Paris to Nantes is only 2 hours 15 minutes by TGV high speed train. The city is clean and easy to navigate. The people are friendly. The château, where the museum is located, is a pleasant five-minute walk from the train station.

The memorial is three tram stops on line 1 from the château. A walk between the château and the memorial takes roughly one-half hour.

A visit to Nantes to see the pertinent sites of the history of the slave trade (the Museum of the History of Nantes, the panels, and the memorial) is a day-trip from Paris.