You are here: Home1 / International2 / Mumbai 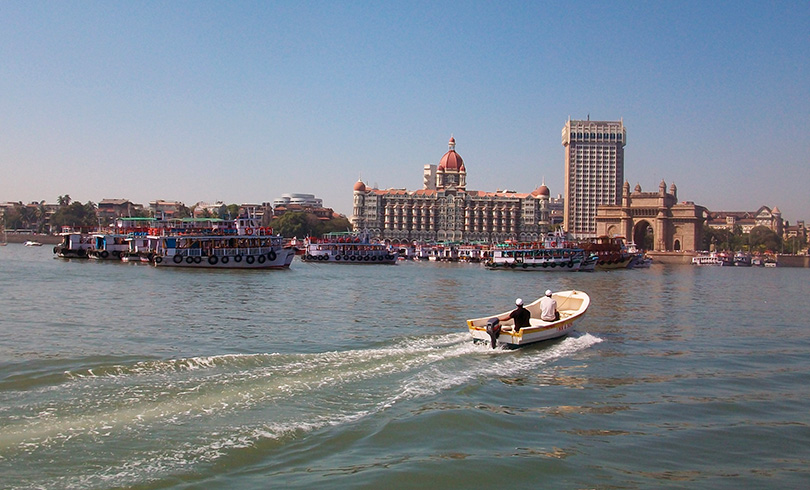 The Gateway to India seen from Mumbai harbor; (c) Soul Of America

Slowing Down for Mumbai

I was choking on a samosa that my boyfriend, Patrick, and I had just bought at dusk on a street corner in Mumbai. A crumb of the savory pastry tickled my windpipe, and a dozen men in line turned to stare as I tried to cough it up. They chattered in Hindi, frowning with concern.

While slapping my back, Patrick pantomimed to the vendor that I needed water. The men passed back a bottle, hand-to-to-hand, as if in the fire brigade. With a few gulps, I was fine.

The incident occurred our first night in the city and lingers because of what it says about exploring Mumbai. What I have come to call “the choking samosa” was the best I’d ever had: a crisp, light crust and an ideal ratio of potato, lentils, and onions laced with ginger, chilies, and spices I could never find at my local grocery store. And I wolfed it down so fast that I choked.

Like the samosa, Mumbai is not a destination to consume in a rush, not a place where you flit from attraction to attraction without contemplation. It sits almost at the midpoint of the West Coast of India, and everything about this metropolitan area of 20.5 million residents is big and bold. Rich in history, sights, sounds, aromas, tastes, and people, Mumbai requires savoring.

We had just three days to do it. 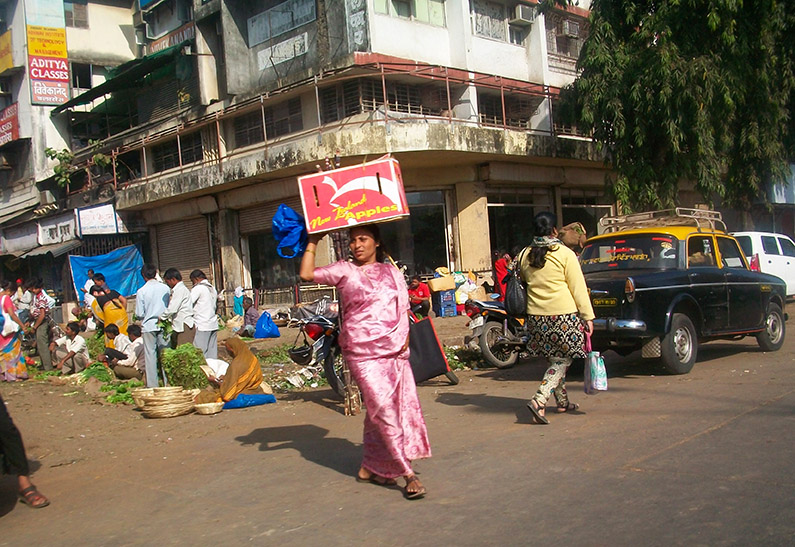 Lady coming from a street market in Mumbai; (c) Soul Of America

Thanks to serendipity, on our second day, we were able to tour the city with insiders. A year earlier at Boston’s Logan Airport, my friend Shelly happened to strike up a conversation with Mumbai residents and young professionals Ankush Deshpande and his wife, Anjali Vashistha. Shelly mentioned that she had friends planning a trip there.

A flurry of emails ensued, eventually resulting in Patrick and I sitting in the cushioned back seat of Ankush’s new car. He’d brought along his sister and brother-in-law, Manasi and Nikhil Joshi, to treat us to the wonders of the city. The hospitality they provided us – two complete strangers – was amazing.

They picked us up at our hotel in South Mumbai, The Renaissance, and we headed for the nearby Gateway of India, an 85-foot-tall fortress of an arch at the edge of Mumbai Harbor. It was built in 1924 when Great Britain ruled India, serving as the ceremonial entrance to the city for the Viceroys and other British dignitaries. The Gateway ranks as the top tourist attraction in Mumbai.

Through the archway, we saw pinpoints of sunlight twinkling on the turquoise waters of the Arabian Sea. Sailboats and yachts bobbed next to rowboats and tugs. Gulls cawed and swooped through air-cooled by a morning breeze. I did what we always do in the presence of splendor: I framed the images with my camera. Click…click…click. 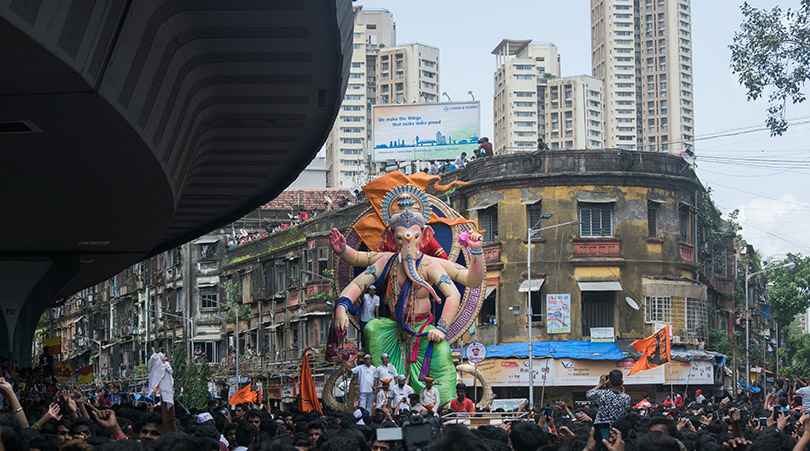 Then, I stopped shooting. We were at the beginning of a month-long trip through India. I wanted to make memories to hold dear for a lifetime. Shouldn’t I capture more pictures? Shouldn’t I savor? So, I stood and just took it all in.

I marveled that President Obama had looked upon this same scene. Behind us stood the Taj Mahal Palace Hotel, a five-star majestic symbol of aristocracy that the U.S. government rented out in its entirety for the president’s visit in 2008.

Over-the-top regal with its Gothic architecture, the hotel looks like a palace literally “fit for a king.” Rumors claim that the Indian industrialist Jamsetji Tata built it in 1903 after being refused entry to the elite Watson Hotel, which was restricted to “whites only.” But many have challenged that account, insisting he merely wanted to build grand accommodations worthy of Mumbai.

Our next stop was a mouthful – The Chhatrapati Shivaji Maharaj Vastu Sangrahalaya. Formerly known as the Prince of Wales Museum of Western India, it offered a sweeping overview of the continent’s history, religions, and culture. Surrounded by manicured lawns, immaculate gardens, and palm trees, the museum houses 50,000 exhibits divided into Art, Architecture, and Natural History.

My favorite was a detailed wall-mounted timeline depicting India throughout the ages. Among dozens of facts we learned was that Mumbai’s original name, Bombay, was changed in 1995 as an homage to the Hindu goddess, Mumbadevi.

Our hosts also took us to a viewing area on the coast to see Haji Ali Dargah, a mosque that some call the most recognizable landmark of Mumbai. It sits on an islet 1,500 feet off the coast of South Mumbai, connected to the mainland by a narrow causeway that 40,000 Muslim pilgrims cross each Thursday and Friday to worship.

Next, we stopped at the largest and most expensive home in the world, Antila. With a price tag of $1 billion, the residence was commissioned by India’s richest man, Mukesh Ambani, for himself, his wife, and three children. We sat just outside the mansion, gazing up at its 27 stories and 398,000 square feet. 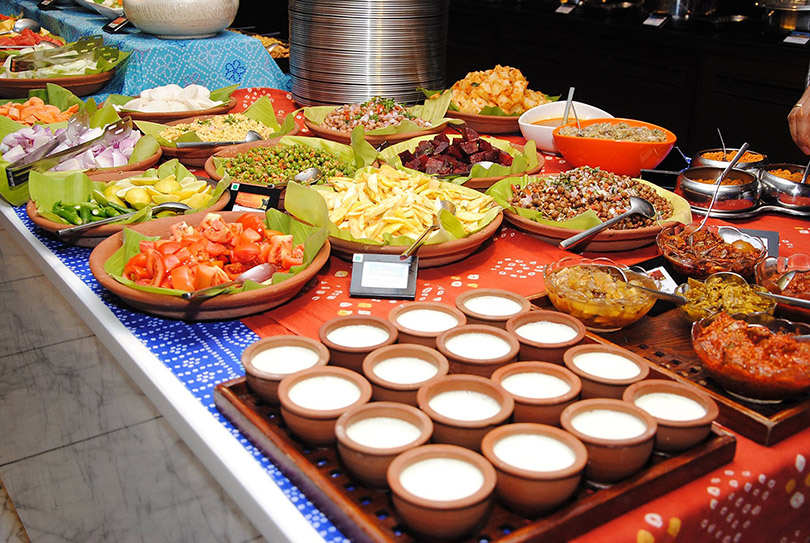 And we lunched at a popular, upscale restaurant, Status, famous for its Gujarathi Thali. The expansive dining room was packed and buzzed with conversation and laughter with nary a tourist to be found. Ankush, Manasi, and Nikhil gave us a literal hands-on lesson in eating Thali (pronounced “tally”), small individual bowls of traditional vegetarian dishes arranged on a large, round metal tray that we all shared. We scooped up the rice, curries, dal (lentils), and veggies with our fingers and were rewarded with bursts of spicy flavors that delighted our tongues. It reminded me of eating an Ethiopian meal.

A highlight of the day came when Ankush insisted that he take us home to meet his family. We drove across the iconic, sleek Bandra Worli Sea Link Bridge, whose center section resembles two towering back-to-back triangles. Ankush’s household, which included his wife Anjali and his parents, welcomed us like family. We relaxed in their cozy, contemporary home for refreshments and a lesson in cricket, India’s national sport that is somewhat similar to baseball. The giant flat-screened television was broadcasting a game.

Closer Look at a Mumbai Neighborhood
My boyfriend and I spent two days investigating a Mumbai neighborhood near our hotel to vibe with the locals.

Mubai History
Mumbai’s History begins with the Koli tribe of fishermen and a maritime trade outpost with Persia and Egypt in 1000 BC. 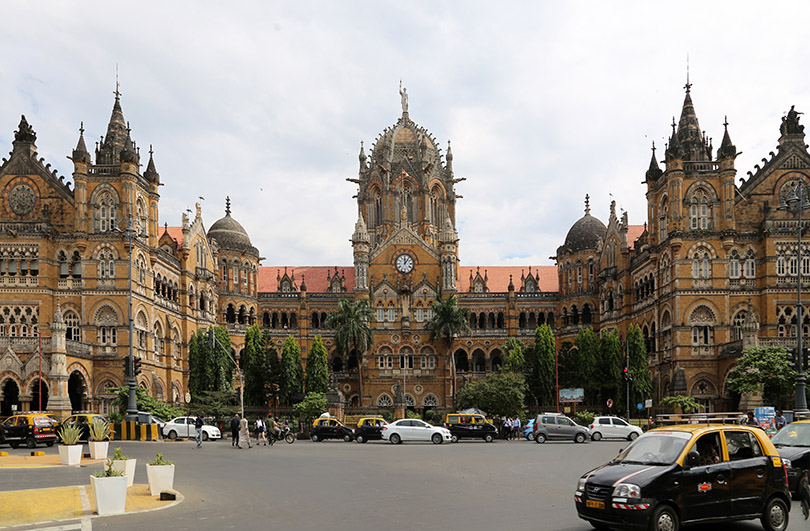