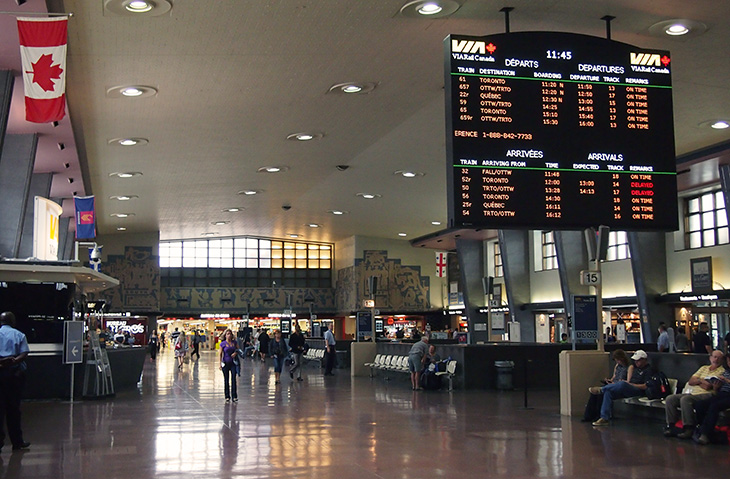 Montreal Trudeau International Airport (YUL) is the 2nd busiest airport in Canada and has United States border pre-clearance. Hence, flights from the USA are considered “Transborder” rather than “International” flights. The airport is named in honor of Pierre Trudeau, the 15th Prime Minister of Canada and divided into three concourses. Star Alliance and SkyTeam have a large frequent flyer lounges within the airport. Pay-In lounges are available to all passengers, regardless of airline or frequent flyer status. MONTREAL-TRUDEAU INTERNATIONAL AIRPORT MAP

Check the luggage policy for your airline and confirm your flight at least 24 hours in advance. Make a copy of your passport/flight itinerary/hotel reservations and leave it with someone at home. Pack headache and other medicines in your hand luggage.

About 30 air carriers transport more than 14 million passengers to/from 130 destinations. Runways were recently lengthened to handle an Airbus A380 plane. The International Terminal expansion completes in 2016. There is free WiFi through the airport.

Taxis and shuttle buses await you at the Arrivals roadway. The airport is located 13 miles west of downtown Montreal. The 747 Express airport bus runs 24/7 between Montréal-Trudeau Airport and Gare d’Autocars de Montréal bus station at Berri-UQAM Métro station. The 747 Express bus costs $10 (coin only on the bus). Purchase the ticket machine at the airport, which accepts credit/debit cards and bills. Consider purchasing your roundtrip ticket marked for usage on a later date.

Gare Centrale is a utilitarian building from the outside, but very functional inside. It handles an average of 49,000 daily patrons and is the second-busiest train station in Canada. The main concourse occupies the block bounded by rue de La Gauchetière, Robert-Bourassa Boulevard, René Lévesque Boulevard and Mansfield Street. Its street address is on de La Gauchetière. The station is served by Via Rail and Amtrak intercity trains, AMT commuter trains and Montreal Metro trains.

The architecture of Gare Centrale is an Art Deco-International mix of styles. The large concourse has most ticket counters and kiosks pushed to edge of the room, leaving more space for crowds. There are two large interesting bas-reliefs depicting Canadian life, arts and industry included in the bas relief. There are 2 stairwells and 5 escalators for easy access to 14 underground tracks. In 1966, Gare Centrale and Place Bonaventure were connected underground by the Bonaventure Metro station.

Opened in 1966, Montreal Metro was the first subway system in the world to run entirely on rubber tires rather than steel wheels. Rubber enables a quieter ride for passengers and buildings above the tracks. Unlike most Metro systems, it is built entirely underground due to Montreal’s winter conditions, which would make rubber tires impractical.

Montreal Metro is used by nearly 1.3 million patrons each weekday. Despite only 4 Metro lines and 68 stations that cover 43 miles in Montreal, it attracts over 400,000 more daily passengers than Washington Metro having 6 lines and 91 stations that cover 117 miles. Its mostly clean stations are as busy as a typical NYC Subway station. Aesthetically, every Metro station platform area has a different layout and motif. Metro starts at 5:30a and ends at 12:30a. For nightlife convenience, Metro ends at 1:00a on Fridays and Saturdays.

Société de Transport de Montréal (STM) runs Montreal Metro and buses. Purchase Metro ticket here. MONTREAL METRO SYSTEM MAP. As you see from the Metro Map, lines are by color. Trains are named for the last direction stop on their line. Anticipate higher traffic at stations that intersect Metro lines or AMT commuter rail lines, such as Bonaventure, Lucien-L’Allier, Jean-Talon, Lionel Groux, Snowden, Berry-UQAM, Parc, Vendome and De La Concorde Metro stations. When approaching each station, the station name is announced in French. If you’ve read your map, you might find it easier to note the electronic display system showing the next station plus connecting metro lines.

http://www.stm.info/en/info/faresOpus Card Tickets can be bought at any Metro station booth (cash only) or machine (cash, credit/debit card). Transfer mens you stay in the station to switch trains. Once you leave the Métro system, you have consumed a ride on your trip ticket. Keep your ticket as proof of purchase. Ticket inspectors with wireless machines often board trains.

Tourists usually purchase Opus cards having 2 trip, 10 trip, daily, weekend, 3-day or weekly trip capacity. Even if you’re a car-only person in America, try the Metro for at least 2 trips in one day, if only to experience this interesting part of Montreal. So plan on spending $6 to $25.50 to use the Metro. Children under 5 ride for free.

If you miss your stop or realize you’ve headed in the wrong direction, no need to pay again. Simply get off, walk up the stairs or escalator without exiting through the turnstile, walk down the other side of the station to the opposite track platform. Longueuil Station at the end of the Yellow Line, is the only station that does not provide this simple no-cost correction. There, you have to pay for a new ride.

Montreal is much safer than American metro areas of similar 2 to 4 million population. A single person can go anywhere on the system in the day time. But at night, there are a few dicey Metro Green Line stations on just east of downtown where there have been reports of electronics theft and aggressive panhandling.

Like Metro systems worldwide, prevent being targeted by pickpockets as a vulnerable tourist. If traveling alone, avoid reading paper maps or tourist books on the Metro. Instead, read the larger paper map or the map on your computer/tablet in your hotel room. With that practice, you’ll be quick and confident reviewing the same map inside the train before de-boarding.