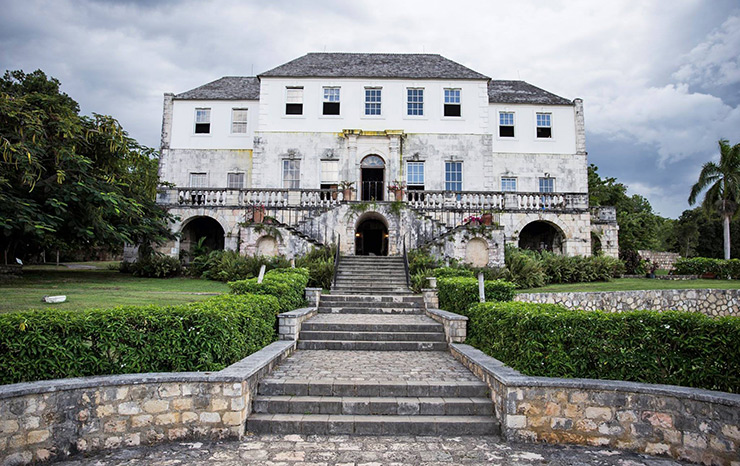 Rose Hall Great House, built on a 1700s plantation, is said to be haunted by the White Witch; credit Jamaica Tourism Board

Montego Bay History, like most of the Caribbean, begins with the Tainos, an Arawak Indian tribe originating from South America over two thousand years ago. The peaceful Tainos, Jamaica’s first inhabitants, greeted Christopher Columbus when he arrived in Montego Bay in 1494. Columbus called the Bay “El Golfo the Buen Tiempo”. When Spaniards settled here after 1510, they called it the “Bahia de Mantega” because of the large quantities of pigs’ lard they exported to colonies in South America and the Caribbean. Traversing centuries of dialectical change, Bahia de Mantega evolved to “Montego Bay.”

Initially, Spaniards after Columbus settled near St. Ann’s Bay. They eventually moved to Villa de la Vega, now called “Spanish Town”, to become the island’s primary port of governance. Disease, inter-marriage and skirmishes ultimately wiped out the Tainos. But Montego Bay became the capital of the Parish of St. James and the second city in Jamaica. With the British occupation of Jamaica in 1655, St. James was among the second group of Parishes founded in 1671.

By the 1650s after many wars with the Spaniards, the British captured Jamaica. In a last defiance against their British conquerors, the Spanish settlers freed and armed their slaves, who sought refuge in the island’s interior. The Maroons, as these ex-slaves came to be called, continuously defied the new British colonizers. Jamaicans proudly boast that they have one of the few armies to prevent a complete British takeover of their island. Maroons still exist in Jamaica.

Montego Bay remained a small town until 1721, when Captain Jonathan Barnett sub-divided a portion of his sugar cane fields and created Charles Town. It became Charles Square, now called Sam Sharpe Square, and Barnett Town. Commerce flourished, resulting in the rapid expansion of waterfront activities. Fort Montego was built near Montego Bay on a small bluff to protect the town. With more ship captains feeling safer from invasion by French and Spanish forces and from pirates, more commercial growth occurred.

Under British governance and enslavement of Africans throughout the 1700s, Jamaica produced nearly a quarter of the world’s sugar on vast plantations. The vilest of chattel slavery practices existed on those sugar plantations. As a result of chattel slavery and the Maroons, Jamaica conducted more slave uprisings than any other Caribbean island. Frequent slave uprisings coupled with brutal reprisals by the plantation owners, eventually troubled the European Christian conscience.

Over a century, anti-slavery sentiments grew stronger in Europe. Jamaica played a strong role in the British Emancipation Act of 1834 to free all slaves under the age of 6. Others were to serve a period of apprenticeship for 4-6 years. But plantation owners continued to abuse their apprentices, triggering full emancipation to all Jamaicans in 1838. Many former slaves and apprentices left the plantation to settle in other areas of this large island.

With the drop in sugar plantation productivity and profitability, Jamaica diversified its economy. Plantation owners recruited indentured workers from China and India. After their period of indenture, many Chinese and Indians stayed on the island, adding to Jamaica’s eclectic mix of cultures. Bananas and coffee were added to the list of cash crops in Jamaica’s economy.

Jamaican politics also transformed with the end of slavery. In 1866, the island implemented the crown colony system of government from Great Britain. Under the new system, promises of education, health care, infrastructure and social reforms a newly freed generation build their hopes. But decades later, hopes turned into disappointment and civil unrest, heralding the birth of the trade union movement.

Today, Montego Bay is divided into the built up city of Falmouth since the 1700s, a long hotel strip area and outlying hotels and villas on the hillside. “MoBay”, as some locals like to boast is where parts of the James Bond movie “Live and let Die” were filmed.