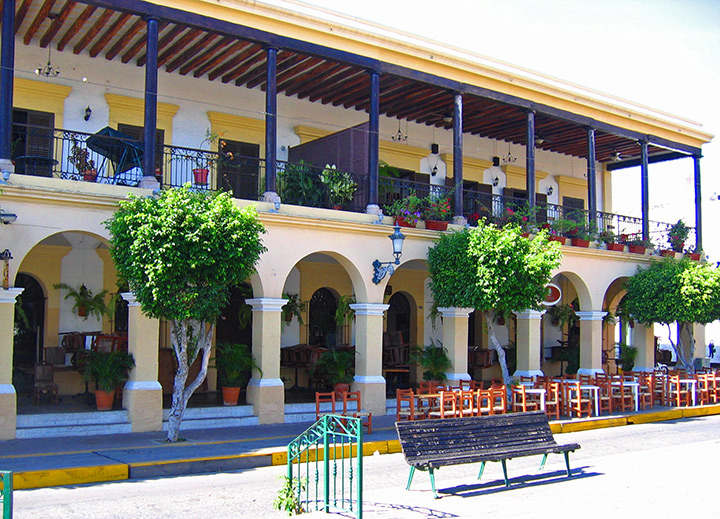 Casa Machada, one sample of restored buildings in the historic district of Mazatlan; (c) Soul Of America

Mazatlan History begins with In pre-Hispanic times in Mazatlán, which means “place of deer” in Nahuatl. It was populated by Totorames Indians, who hunted, gathered fruit, grew crops and fished. Strong evidence suggests their presence in the region for over 1,000 years. Scientists have found petroglyphs on off shore islands that date back as far as 10,000 years.

Spanish explorer Nuño de Guzmán founded a settlement here in 1531, but it was not successful. Sailors called the place the Islands of Mazatlan because of the many hills, lagoons and estuaries in the vicinity of the natural harbor there. The name Mazatlan was first mentioned about 1602, but it referred to a small village of San Juan Bautista de Mazatlan which is 30 miles south of the current city of Mazatlan. That village today carries the name of Villa Union. Spanish galleons departed the harbor laden with gold taken from the inland mines in the region.

And when gold enters the equation you can bet there are the legends of pirate treasure buried up and down the coast in various coves. It appears that French and English Pirates were the first to take advantage of the benefits of Mazatlan’s hill screened harbor to hide in. They would pounce on those Spanish Galleons up and down the Pacific coast. Colonial government finally took action against the pirates. Reportedly, the pirates were gone by 1800, but the legends of buried gold persists until today. Nevertheless, slavery, slaughter and disease took it’s toll on the local Indian tribes.

The first permanent Spanish colony was established in the 1820s and Mazatlán remained a fishing village throughout most of the 19th century, as reflected by the simple historic buildings from those times. Ironically, the town of Mazatlan was developed by German immigrants who built port facilities to import agricultural equipment and started international trade.

The Port of Mazatlan was occupied by American troops in 1847 during the Mexican American war, and in 1864 by the French, during the American Civil War when a group of Confederate soldiers took the city. Mazatlan served as the Capitol of the Mexican state of Sinaloa from 1859 to 1873 when it had a population of only a few thousand people.

When Porfirio Diaz (1876-1910) took over as president, the railroad arrived, the port and lighthouse were modernized, and the cathedral was finished. There was a new age of education, arts and journalism flourished. The Teatro Rubio was completed in the early 1890’s which became a premier opera house. During the revolution of 1910-17 General Venustiano Carranza ordered a bi-plane to drop a crude bomb of nails and dynamite in Mazatlan. The bomb killed two citizens and wounded several others. Order was restored in the 1920’s until the 1930’s depression hit.

Although tourism here started in the 1930s, it mainly for charter-fishing and hunting. General tourism took off after World War Two, with more port improvements and new highways. Resort hotels appeared along Playa Olas Altas, Mazatlán’s first tourist beach in the 1950s.

By the 1960s, the jet age enabled tons of American tourists to discover the beautiful white sand beaches and increase demand hotels, restaurants, watersports and of course, the now famous Malecon along the coast.