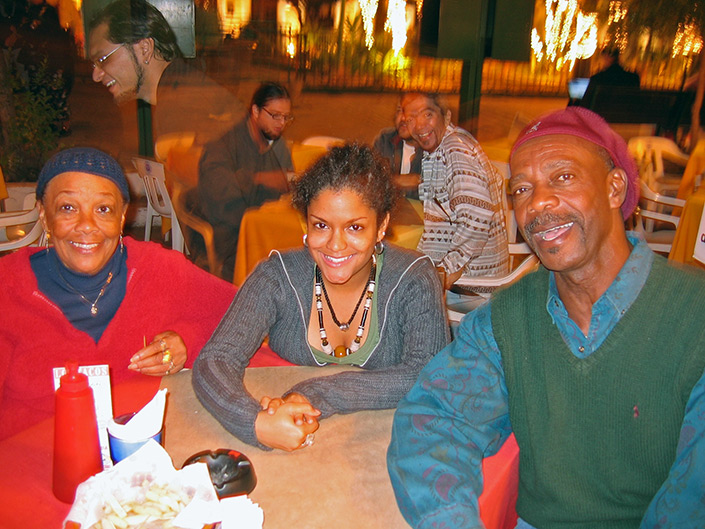 Though most visitors are attracted to Mazatlan for the pristine beaches, resort hotels and great restaurants, it is this plaza in a district called “Centro Historico,” that inevitably draws them again and again. Come visit to dine, shop, check out nearby museums or just sit in the sun and soak up the sense of community found among friendly residents. They are eager to provide directions to any parts of the city — Jeanette Valentine, Soul Of America

I am savoring fork-tender flank steak one evening outside of Pedro y Lola’s, an always-crowded restaurant that fronts Plazuela Machado, Mazatlan’s chic, revitalized town square. The plaza is ablaze with strings of lights draping trees and shrubs. The air hums with conversation, most in Spanish, but some in English, as tourists join locals dining alfresco and knocking back icy marguaritas from Goliath-sized glasses rimmed in lime and salt. In the background, bluesman Gene Grooms, a soft-spoken brother from British Columbia, is strumming his guitar and crooning like a native son of the Mississippi Delta.

With its open-air cafes, art galleries, crafts shops and museums, Plazuela Machado operates in much the way it did more than a hundred years ago – as the heart of Mazatlan. The plaza was built during the city’s mid-19th century hey day, when its commercial port did a brisk trade sparked by the local mining of silver and gold.

Mazatlan is a sprawling city that sits on the Pacific Ocean just parallel to the southern tip of Baja California. It is known by many names: “Shrimp Capital of the World,” “Pearl of the Pacific” and “Land of the Deer” a literal translation of Mazatlan from an Indian language called Nahuatl.

Look again to Plazuela Machado. An expanse of well-cultivated greenery studded with palm trees, it is named after Juan Nepomuseo Machado, a businessman of Filipino descent who made his fortune in mining and shipping in the mid 1800s. The neo-classical buildings that line the plaza date back to the 1830s, their warm yellows, peaches and burgundys making the foliage appear all the more verdant.

Commanding one side of the square is the grand Teatro Angela Peralta, or Angela Peralta Theater, a restored live performance venue and professional performing arts school where audiences can enjoy opera, ballet, theater and dance. The building is named after the world-renown opera diva Angela Peralta, who came to Mazatlan to perform in 1883 and died of yellow fever in the theater ten days after her arrival. I visited the city in December and was lucky enough to catch the theater’s impressive production of “The Nutcracker.” 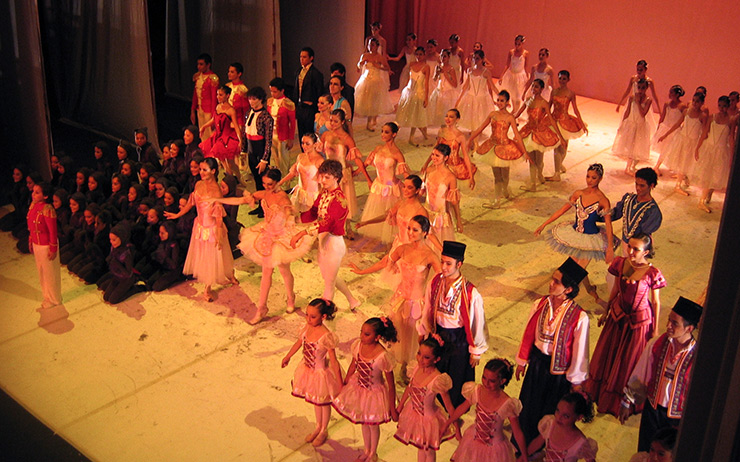 In the plaza and all around Mazatlan, colors delight the eye. Buildings, houses and storefronts are swathed in brilliant oranges, greens, blues and enough other hues to shame a box of Crayola crayons. Bushy clusters of Bougainvillea, their red and purple flowers so rich they look like velvet, seem to sprout on every corner.

If the renovated Plazuela Machado is Mazatlan’s hip, happening future, Plaza Revolución just a few blocks away is its relaxed, dignified past. The pace is slower here, where towering palm trees shade senior citizens lounging on wrought-iron benches. Other adults mill about chatting while children run through broods of pigeons, scaring them into flight. This is Old Mazatlan. A few vendors are selling t-shirts and bead necklaces, but most of the folks lingering in the square look more like residents than tourists. 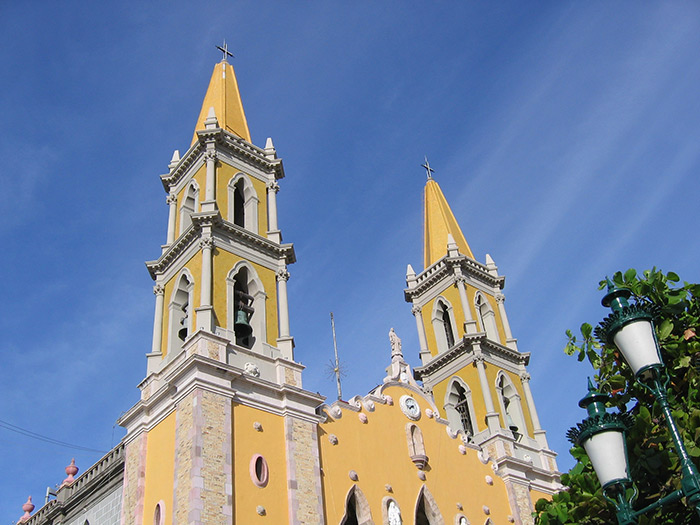 Cathedral of the Immaculate Conception, Mazatlan; (c) Soul Of America

That’s not the case across the street, where the canary yellow Basilica de la Inmaculada Concepcion (Cathedral of the Immaculate Conception) rises majestically, drawing a steady stream of gawkers to its twin bell towers. The Basilica is a marvel of Baroque architecture with a grand, almost sky-high interior dome that stops you in your tracks with its beauty. More than 90 percent of Mexico is Catholic. Devotion to the church can be seen in elaborate alters like this one, with its tall statues of saints and massive Roman columns flanking an elevated life-sized portrait of Jesus Christ.

Half a block from the cathedral is the Mercado Centro or the Central Market, a vibrant landscape of fruit and vegetable stalls, pottery and craft shops and souvenir venues hawking everything from Frida Kahlo handbags to Spider-Man piñatas. The doughnut-like scent of freshly made churros – long, circular fried-dough pastries sprinkled with powered sugar – hangs in the air. 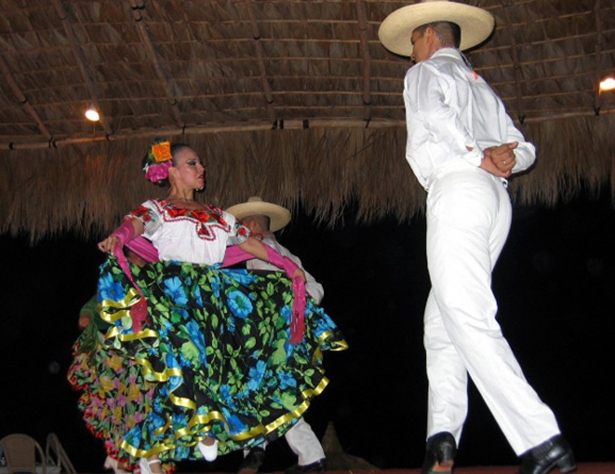 “Senora, you look so pretty today,” one enterprising salesman calls out to me before delivering a heavy-handed pitch for an aqua-blue sun dress. Around the corner, the butchers’ aisles (la carniceria) showcase dark-pink cuts of beef, sausages bursting their seams, flank steak sliced dime-thin and hefty pork roasts marbled with strips of fat. If you can’t find what you’re looking for in the Mercado, the narrow streets around it offer endless storefronts brimming with inexpensive clothes and jewelry.

To experience the true culture of rural Mexico, I go on a day trip offered by the local tour company Pronatours. Within an hour’s bus ride are several “pueblos,” or towns, worth exploring. The homes that line Malpica’s narrow, dusty streets are simple, square structures painted bright pinks, greens, purples and yellows. Chickens scatter as children laugh and play nearby.

Victor, the guide for our tour group, leads us down a path until we come to a make-shift craft store with a smiling middle-aged woman behind a card table displaying good-luck figures carved from driftwood. Further on is a tile-making operation. The craftsman is manipulating the levers and gears of what we’re told is a centuries-old press that cuts, sands and paints 12” tiles. Down the street, we watch as sheets of piping-hot pastries are pulled from a huge stone oven at the local bakery. The warm sweet rolls practically melt in my mouth. 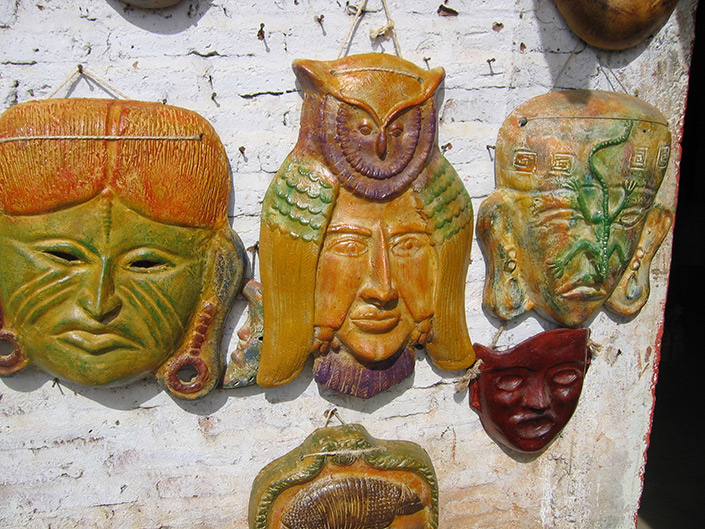 The pueblos Concordia and Copala (pronounced co-PAH-la) lie in the foothills of the lush Sierra Madre mountains. Both have grand cathedrals in their town squares — 18th century San Sebastian Church in Concordia and 17th century Iglesia de San Jose in Copala. Each colonial town offers histories rich with drama. For example, Concordia endured savage pillaging at the hands of French soldiers who invaded in the mid 1800s. When a feisty widow told the French General, “You are not worthy of being called a man,” rather than killing her, he burned Concordia to the ground. A mural near the downtown square depicts the history.

Currently, the town is known for its ceramics and expert furniture making. We tour a furniture-making operation where artisans painstakingly carve and sand wooden masterpieces, including heavy rocking chairs that are said to last a 100 years. 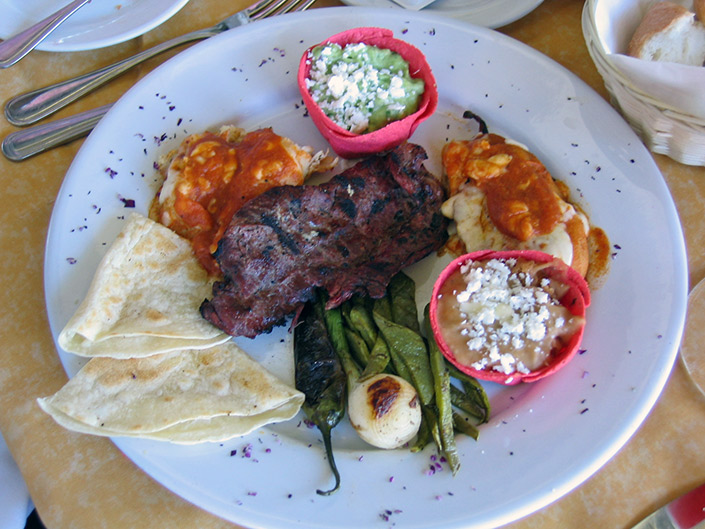 In Quelite (kuh-LEE-taye), a must-visit is El Meson de Los Laureanos, a restaurant with enough artifacts to be a museum itself. Decorated by multi-hued murals against walls of deep golds, reds and oranges, the restaurant serves the tenderest pork and freshest tortillas – made before your eyes on the premises – I’ve had in my life. The town also boasts the region’s largest rooster farm, where squawks pierce the air like a “cock-a-doodle-doo” soundtrack, cranked up high and stuck on repeat. The farm breeds and grooms about 2,500 birds for cockfighting, an unofficial national sport. Roosters out-number people in Quelite.

After an energetic day of absorbing local culture, I am eager to relax on the balcony of my room at the Hotel El Cid Marina. El Cid owns several properties in Mazatlan, and true to its name, the one I stay at fronts a picturesque marina where dozens of yachts are anchored. The hotel itself is beautiful, with magenta Bougainvillea wrapping around tangerine-colored buildings, and the staff is first-rate. But I am unimpressed by the artistically served, but not so flavorful food at the hotel’s restaurant (American cheese on enchiladas?). Guests at one El Cid hotel have access to activities at others, and so one night I am able to attend a dinner performance at another El Cid property. The buffet meal of authentic Mexican fare is hearty, and the colorful floor show featuring dancers in regional costumes and a mariachi band is thrilling. 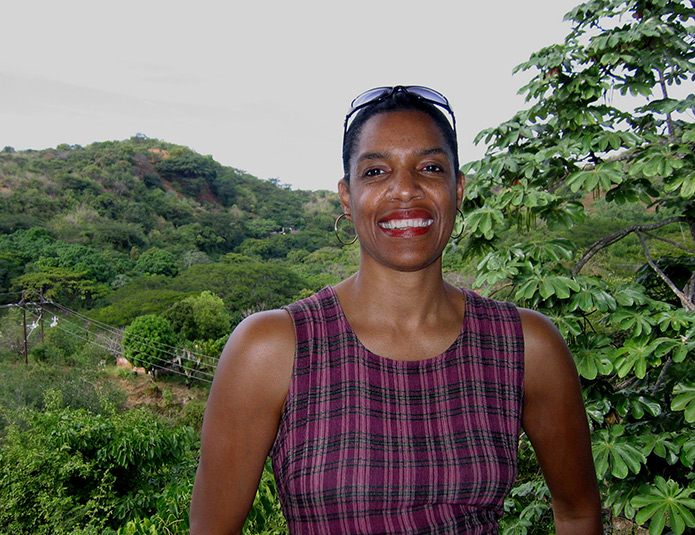 Jeanette Valentine on the patio of Daniels Restaurant, Mazatlan; (c) Soul Of America

It’s a testament to the city’s charm that more and more folks from the United States and Canada are packing up all of their earthly belongings and moving here for good. They have found, as I did, that Mazatlan is an irresistible combination of tropical paradise and historical elegance that exists in few other cities in Mexico. To find events during your visit, pick up a copy of the ubiquitous “Pacific Pearl,” a monthly English newspaper, or visit http://www.pacificpearl.com.