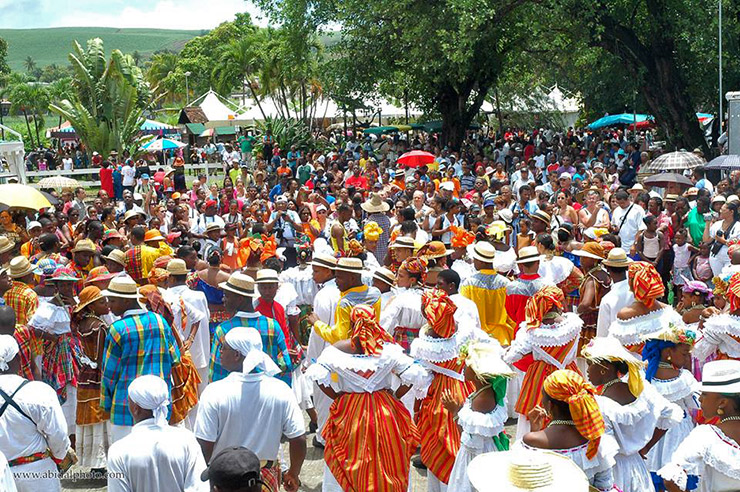 If want to party on Martinique, then you must experience French Caribbean music. Men and women dance with intertwined bodies in total harmony. Simple descriptions like this filled magazines and newspapers around the world during the 1980s, when “Zouk Fever” exploded. A dance full of sensuality, Zouk Fever became an icon of the Caribbean and a synonym for its charm.

The rhythm, whose name is slang for the word “party” in Creole, was born in the late 1970s in Guadeloupe, French West Indies, with the debut of the legendary band Kassav, founded by Jacob Desvarieux and the brothers Pierre and Georges Decimus. The idea, supported by renowned musician Freddy Marshall, was to give a more modern guise to carnival music from Martinique and Guadeloupe. The band released their first album Love and Ka Dance in 1980. However, it was in 1985 that they achieved global recognition, with the hit “Zouk la sé sèl médickaman nou ni,” which means “Zouk is the only medicine we have” in Creole.

In addition to sharing the birthplace of Zouk with Guadaloupe, the beautiful island of Martinique is where “Zouk Love” was born – a slower, more melodic and sensual rhythm. One of the biggest successes came with Jocelyne Béroard, who became one of the leading vocalists of the band Kassav, in 1983. The Martinique native also recorded an album with Philipe Lavil, featuring the famous hit “Kole Séré,” one of the most played songs in the history of Zouk Love.

Over the years, Zouk Fever has strengthened the vitality of other Caribbean dances around the world, such as Salsa, Merengue and even the Brazilian Lambada, often confused with the Love version of the music from the Antilles.

These various influences and blends with Jamaican Reggae or the Angolan Kuduro led to new styles of Zouk, is proof of its cultural richness. Besides the traditional and Love versions of Zouk, there are other styles: Betón, played in carnival music from Martinique; American R&B, which French purists prefer to call Zouk Nouvelle Génération; and even the newly created Soulzouk, widespread in Brazil.

When walking through the streets of Fort de France, the capital of Martinique, or between small townships in the interior of the island, it is common to hear the native melody in its various forms. Bars and restaurants use it as background music, conveying a compelling sense of joy and seduction.

In the famous nightclubs specializing in Zouk Fever, such as the Cotton Club or Le Negresco, local dancers mingle with tourists, who have fun while sipping the typical drink Ti Punch, a version of the Brazilian caipirinha, with lime, sugar cane syrup and white rum. There is also a tropical version called a Punch Planteur, with citrus fruits, roots and herbs–a blend that harmonizes perfectly with the infectious swing of the Caribbean.