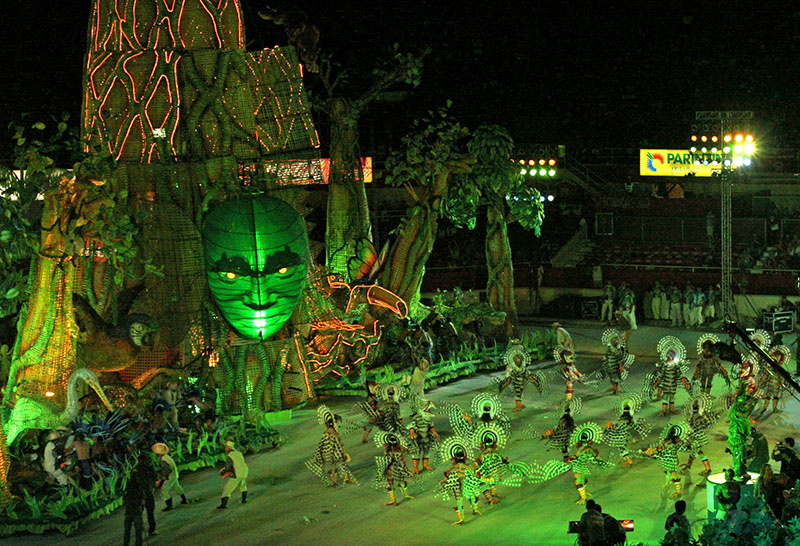 Why only fly to Manaus to explore the Amazon River, when you can include the fabulous Parintins Festival with Brazilians?

I and ten other world-traveling journalists and authors have never seen anything like it before in the entire world. The 5½ hour performances cause the stadium to rock and roll like no other event that I have witnessed. It is like July 4th, Christmas, New Year, Easter, Mardi Gras, and Superbowl events rolled into one.

The men are in the best dressed “most handsome” category who sing, dance, and gyrate in a way that can compete with the best male dancers. Best of all, all this is done in good taste.

Not only is the stadium rocking and rolling during the nightly performances, but the entire town of 100,000 also becomes transformed into two camps of red or blue with the addition of 100,000 visitors.

All over the town, spontaneous celebrations of dancing, eating, and friendly shouting matches break out all over the city. Special boats are brought in to handle the crowds as visitors swamp the city. It seems everyone is in a great mood to party 24/7 and have a great time for the five days that constitute festival week. 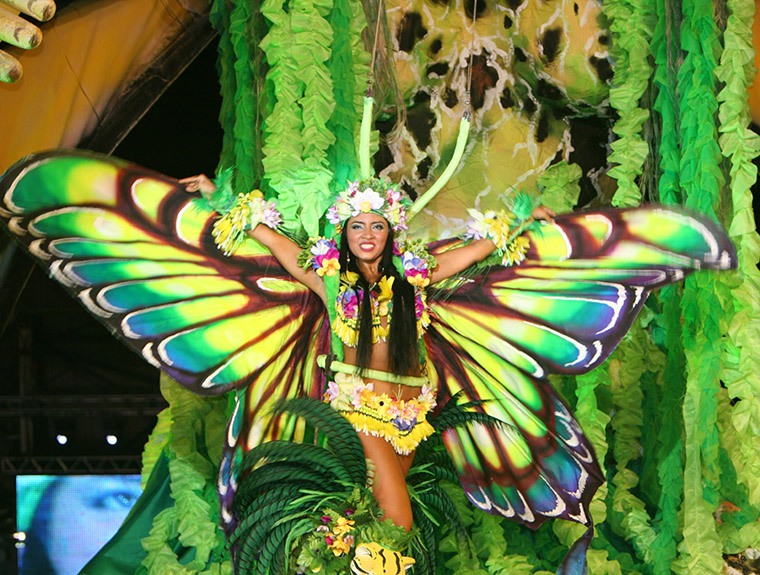 We journalists got in on the feasting as we had the honor of being invited to the home of Sandro Putnoki as he celebrated with family and friends. We had an extraordinary time and felt like family ourselves as we feasted on feijoada, the national dish of Brazil. It consists of beans, pork, collard greens, farofa (manioc fried flour), and slices of orange.

Yeah, that’s right, it is soul food. We also drank Caipirinha, Brazil’s national cocktail, made with cachaça, sugar, and lime. Cachaça is Brazil’s most common distilled alcoholic beverage. Like rum, it is made from sugarcane.

Cachaça is made from sugarcane alcohol, obtained from the fermentation of sugarcane juice which is afterward distilled. We also had some really great local Brazilian beer as well as other Brazilian dishes. Sandro insisted that we all take and wear the Garantido shirts and take a Garantido mug. We all wore them proudly as we enjoyed the fellowship.

I was reminded of how we Americans enjoyed such great family feasts.

We also met the lead singer for Garantido, David Assayag, and his family. We were much surprised to learn that he is blind. He is so expertly led by his lovely wife during the performance we were oblivious. Everyone was so nice and so hospitable we were all loath to leave and catch our plane to return to Manaus.

Sure enough, we almost missed out flight. However, before we leave, let us return to the festival. 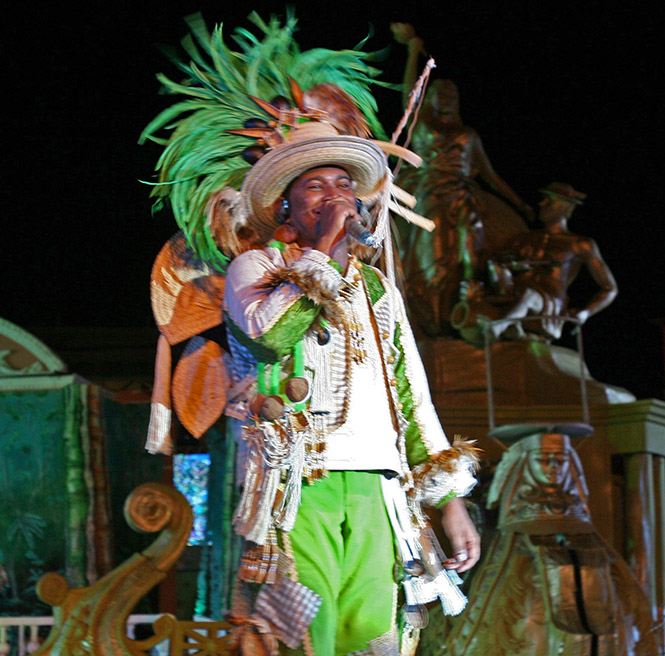 When I went into the factory of the blue team and happened to have on a red shirt, I was refused entry until I changed my shirt. They are fierce in determination to beat the other team in the annual three-day face-off in a series of performances that lasts three days.

The winner has bragging rights for the full year.

For 2½ hours, one team, the Blue Team, and 18,000 of their supporters dance and sway to a pounding syncopated beat of drums and other percussion instruments, horns, flutes, organs, and other instruments.

As the teams perform in the arena, the supporters in the stands act as a giant, swaying organism acting in unison with squads of team leaders who direct their movements. They shout in unison, they sing in unison, they dance in unison, and they throw things in unison; stars, batons, banners, and confetti.

And that is just the beginning.

Teams of performers exhort the crowd and urge them on as they bring hundreds of giant floats in one continuous gigantic performance. Floats is an understatement. Created worked over a year, these floats breathe fire, hang from cranes, and possess wild wonderful colors and shapes.

They are brought in pieces and put together, or hang outside the stadium walls peering in like some giant Gulliver. Some floats tower 50-60 feet high. They are gigantic spectacles of living color, wondrous to behold.

All the while, fireworks periodically explode just outside the stadium, to the cheers of thousands of other supporters outside the arena.

Most amazing of all, the supporters of the red team, the Garantido, all 18,000 of them are deathly quiet. No sound, no cheers, no boos, no catcalls, nothing. I mean, they are figuratively getting “their heads beat in” for 2 1/2 hours and they take it with the discipline of the stone warriors. That is until it is their turn.

As it turns out, their team would lose points if they do not behave themselves. Partisans of teams all over the world could learn the lesson from these Brazilians on how to be a fan. 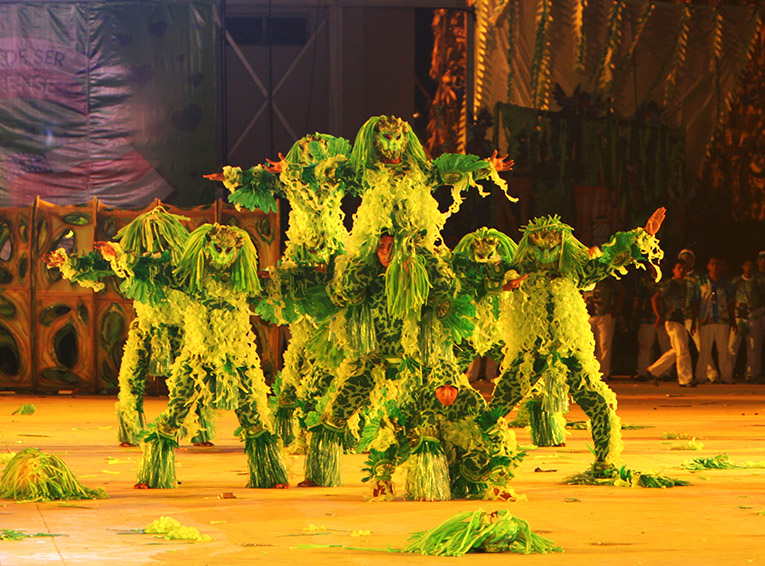 When it is their turn, the team roles are reversed, and the red team begins their wonderful show with entirely new songs, dances, and colorful creations of giant figments of imagination.

At the end of 5½ hours of these performances, I and other journalists were utterly exhausted. I could not have attended the second day of the festival for love or money. You have to develop stamina for this level of enjoyment. There is nothing quite like Parintins Festival!