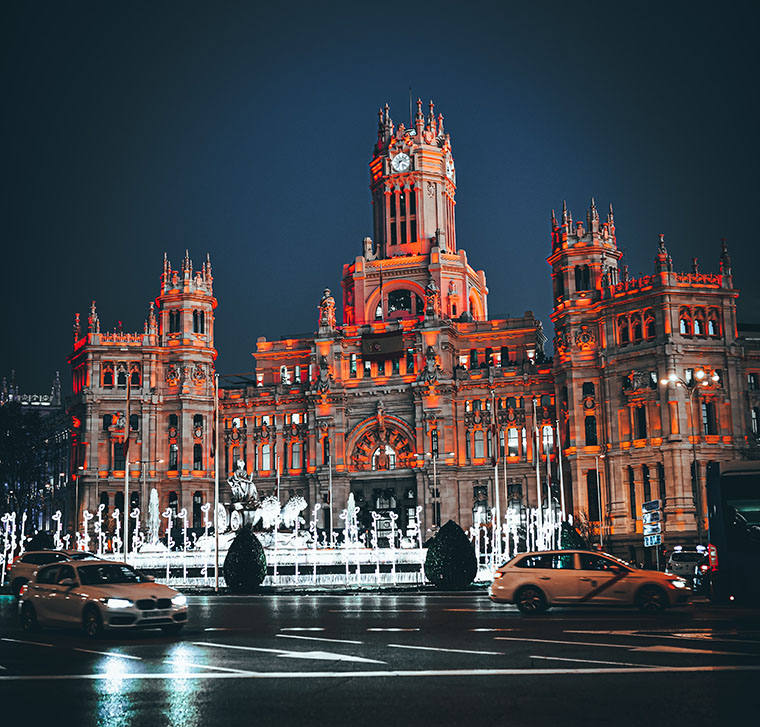 With its remarkable history and diverse architectural styles, Old Madrid is most responsible for this European capital being a world-class destination. The central part of the city absorbed foreign influences and adapted them over the centuries, so today it has an eclectic mix of architecture that includes Art Deco, Baroque, Art Nouveau, Francoesque, Neo-Classical, and Modernism.

Over the centuries, city planners also developed grandiose avenues radiating from central Madrid that are, arguably, second only to those in Paris. They make you want to casually walk and enjoy the streetscape.

Many of the historic neighborhoods in Madrid retain their traditional ambiance even as the city has developed an infrastructure that provides modern efficient services to its more than three million urban inhabitants. At the heart of the city is Old Madrid where most of the tourist attractions and night-time action can be found.

Classy and dignified Ensanche, Madrid’s grandest area, is the home of upscale residences, designer boutiques, embassy buildings, and elegant hotels. Of less interest to visitors are the growing suburban regions on the periphery of the city. 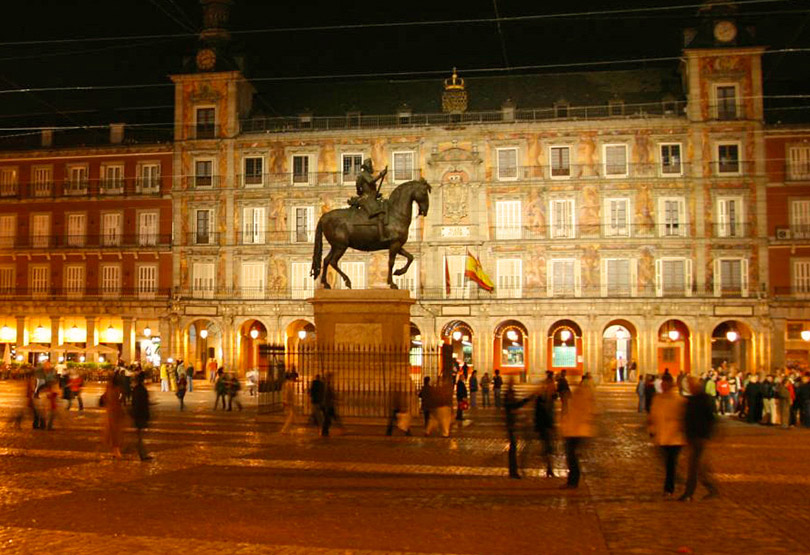 Madrid has a relatively homogenous society. Just under 85% of its inhabitants are Spaniards of different backgrounds and ethnicities. Many young Spaniards have migrated to Madrid from rural villages seeking to improve their social life and economic status. Also seeking a better life in this prosperous metropolis are recent immigrants from Latin America, Europe, Asia, North Africa, and West Africa.

At around three square miles, Old Madrid’s narrow winding calles (streets) and broad avenidas (avenues) are easily explored on foot. A fun, adventurous way to discover the city is to simply let your curiosity lead you down one street after the other. An early morning stroll down the small streets will take you past markets just setting out fresh fruits and flowers, poultry, fish, and a wide variety of jamón (ham). 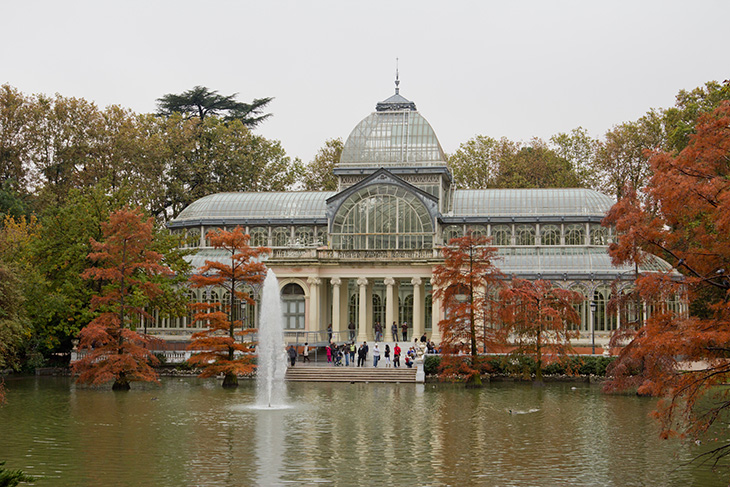 For tourists seeking a more structured and informative itinerary, the Madrid Tourist Information Center located in Plaza Mayor recommends guided walking tours. The Madrid of Cervantes Tour, for instance, focuses on the time of the famous writer Cervantes, author of The Adventures of Don Quixote. The walk follows the streets of an area that at one time was home to great composers, writers, comics, and poets.

The Medieval Madrid tour takes you through Madrid of the 14th and 15th centuries. You’ll see some of the most ancient and tiny streets that you might miss by following your curiosity. These and other small-price walking tours lasting about 90 minutes are led by informative guides who speak Spanish, English, and, in some cases, French.

Regardless of how visitors move around the city, they will find museums, theaters, cathedrals, gardens, plazas, bars, restaurants, and busy streets that capture the sum and substance of Old Madrid. In such a compact place, there really is a lot to see and do.

With so many museums to choose from, most visitors put three of them at the top of their must-see list – the Museo Prado, one of the finest encyclopedic museums in the world that houses thousands of old masters; the Reina Sofía which displays contemporary art including that of Pablo Picasso; and the Thyssen-Bornemisza which displays Western art from the 13th to the 20th century.

This triangle of art is considered a must-see experience for true art lovers.

A museum where you will not see any paintings is the Museo del Jamón. Instead, this park palace, located across the street from the Prado, displays 600 hams hanging aromatically from the ceiling and serves up Spain’s best variety of hams, sausages, and cheeses. A chain of theme restaurants devoted to the world of ham and sausage, it has additional locations all around Madrid. Ham lovers describe the Jamón Serrano, a kind of smoky, dried ham, as heavenly.

Madrid is considered a “Green City” committed to nature and healthy lifestyles. Its parks and historic gardens cover an area more than two-thirds the size of New York Central Park. The largest and most popular of these is the Parque del Buen Retiro (“Retiro Park”) which is the home of some 15,000 trees, a working observatory, three exhibition halls, a rose garden, and a large lake where lovers and families with children enjoy rowing under Madrid’s bright skies. 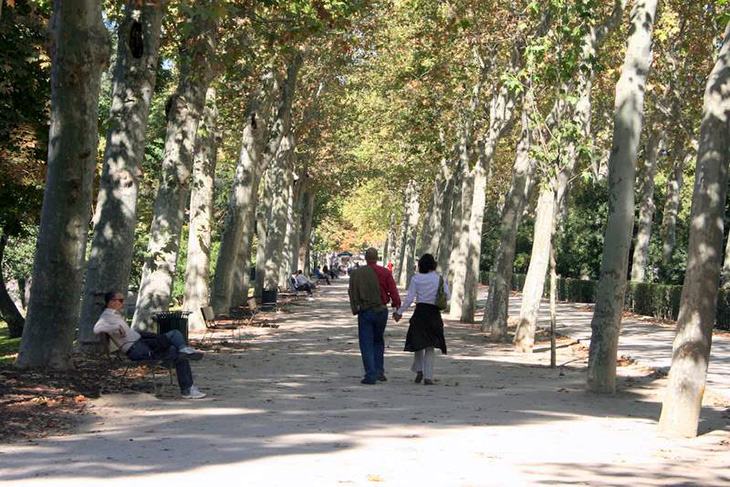 As one of the most attractive city center parks in Europe, Retiro Park was once the playground of the rulers of the country. Today, park visitors can jog, picnic, have their fortunes told, hear a chamber music concert or jazz performance, see a puppet show, rollerblade, bicycle, stroll hand in hand, or relax with a Mahou Cerveza (local Spanish beer) or glass of vino at one of several outdoor pavilions.

The Real Jardin Botánico (Royal Botanical Gardens), designed over 250 years ago, also invites visitors to enjoy a pleasant stroll surrounded by thousands of live plant species. Particularly astonishing is the garden’s collection of lithops or living rock cacti that disguise themselves as boulders as a defense mechanism for survival.

Also drawing interest from visitors is a collection of carnivorous plants and cypress trees dating from the period when the garden was founded.

Madrid’s open spaces include three primary public squares — Plaza Mayor, Puerto del Sol, and Plaza del Callao. Plaza Mayor, formerly the site of bullfights, public executions, pageants, and Inquisition trials, is the principal square in Madrid. Street entertainers, painters, and musicians draw hoards of locals and visitors who just hang out or order paella or tapas and dine alfresco at the wide selection of cafes and bars at the perimeter of the plaza.

Nine streets lead up to Plaza Mayor’s gigantic traffic-free, cobblestoned bustling square which can hold up to 50,000 people. At the center stands a statue of King Felipe III when the square was inaugurated in 1620. Entering the plaza through the huge archways, visitors are greeted by a wide open space more than twice the size of a regulation NFL football field with three-story walls in varying shades of purple and ornately decorated with murals and reliefs.

The name of Plaza del Callao memorializes the 1866 battle of Callao between the Spanish naval forces and the Peruvian army. Over time the square was reshaped into a large pedestrian space with small pieces of urban furniture. Big screens were added to the surrounding buildings, particularly, Cines Callao, the main cineplex of Madrid. 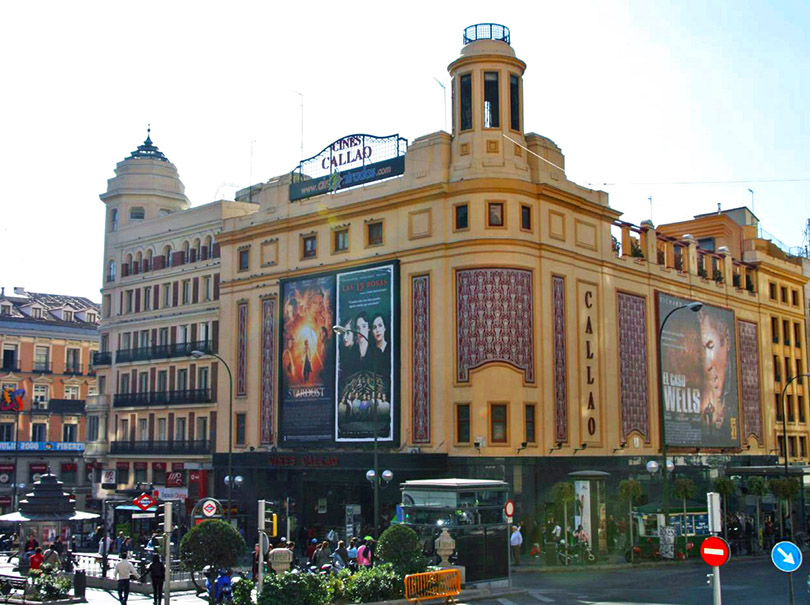 Located on the ground in Puerto del Sol (Gateway of the Sun) is Kilometre Zero, the center of Spain’s road network. From this point, all major road distances in Spain are measured. Ten Metro lines and four highways converge here making it the center of activity.

Madrileños (Madrilenians), as residents are called, gather in Puerto del Sol to celebrate New Year’s Eve. Similar to the ball dropping in New York Times Square, television cameras focus on the big clock to count down the seconds until midnight. Beginning precisely at midnight, revelers eat 12 grapes at each stroke of the clock to represent good luck for the next twelve months.

Both locals and visitors cite the area under the clock as a social gathering point to kick off an evening of fun. Puerto del Sol is also the site of many big political demonstrations. Standing near this popular spot on Calle del Carmen is a 20-ton bronze statue of the symbol of Madrid – the Oso y Madroño (the Bear and the Tree), a bear reaching for the fruit of the madroño or strawberry tree. Perhaps you will find the fruit here too.

Metro Rail stops at Plaza del Callao and Puerto del Sol make them magnets for large events in the city. 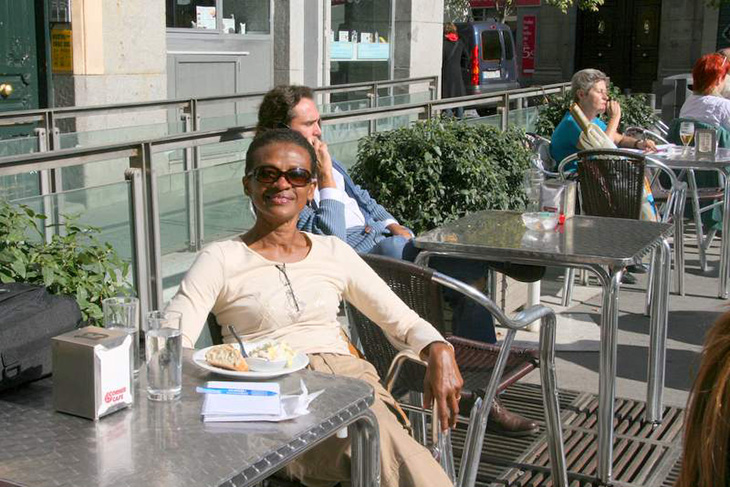